Sutra, as defined by Daigaku Rummé, a Soto Zen monk. 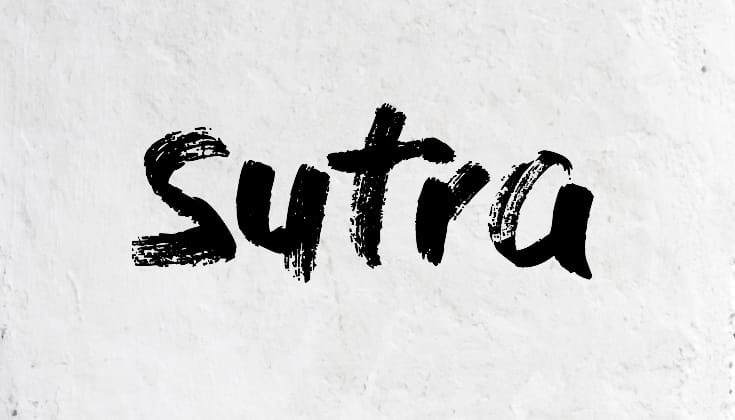 Sutra is a Sanskrit word that originally meant string or thread, although it is now commonly used to refer to the discourses of Shakyamuni Buddha. Sutra is derived from the same verbal root as the English words “to sew” and “suture.” The Sanskrit word was later translated in China and Japan using a character that had the radical for “string” or “thread.” The connection between string and scripture derives from the fact that these were oral teachings that were sewn together from a common theme and passed down from generation to generation. It wasn’t until the first century BCE that people began to write down the Buddhist sutras.

The sutras are collected in the second part of the Buddhist canon that is collectively known as the Tripitaka, the “three baskets of the teachings”: the precepts, the sutras, and the commentaries. The sutras are prose and verse texts that often begin with the words “Thus have I heard.” These are the words of the Buddha’s cousin Ananda, who accompanied Shakyamuni for more than thirty years and who had a word-perfect memory. At the first Buddhist council convened following the Buddha’s death, Ananda is said to have recited from memory all of the Buddha’s discourses.

Each sutra is an independent text that includes a description of the circumstances that led the Buddha to give the teaching and also notes the place, the time of year, and so forth. The actual teaching instruction follows, usually in a simple, easy- to-understand form that is rich in parables and allegories. In the Pali Canon of Theravada Buddhism, the sutras are divided into five collections known as the Nikayas (Agamas in Sanskrit), grouped in order of length. These early sutras are all attributed to the historical Buddha, Shakyamuni.

Along with these sutras, a great many Mahayana sutras have also been preserved. Originally composed in Sanskrit, they now mostly exist in Tibetan, Chinese, Korean, and Japanese translations and are thought to have been composed between the first century BCE and the sixth century CE. Many of the Mahayana sutras, as well as the Theravada sutras, are now available in Western languages. Adopting the same format as the Pali Canon, the Mahayana sutras also begin with the words “Thus have I heard.” This collection of sutras is more extensive and includes many lengthy works that can be divided into two currents of tradition: sutras based on faith or devotion and philosophically oriented sutras on teachings such as emptiness and buddhanature. While these sutras are clearly not the direct oral teachings of Shakyamuni Buddha, they are regarded by followers of the Mahayana as being no less, and perhaps more, important than the Pali texts. Many of the Mahayana sutras, such as the Lotus Sutra, the Lankavatara Sutra, and the Sukhavati-vyuba Sutra, became the foundations for new schools of Buddhism.

The tradition of composing new expressions of the Buddha’s teaching continued with the spread of Buddhism, and many other texts, including the Platform Sutra from seventh-century China, as well as works by Dogen Zenji and Daito Kokushi written in thirteenth-century Japan and so on, are also considered by many Buddhists to be sutras. While some schools of Buddhism emphasize the study and also the memorization of sutras as a means to understand the nature of practice and to embody the Buddhist teachings, some schools, primarily Zen, emphasize that Buddhist practitioners must not rely on words. “If you say the word ‘fire,’ why doesn’t it burn your lips? If you say the word ‘water,’ why doesn’t it quench your thirst?” These are rhetorical questions that a Zen master might ask his or her students, prodding them to see that the teachings, whether sutras or otherwise, are only descriptions and not the thing itself. “Fingers pointing at the moon” is another well-known Zen expression that describes how the sutras only point to the objective of liberation; the analogy is used to encourage practitioners not to be overly concerned with the explanations provided by the sutras, but rather to realize that the moon of liberation we seek is the dharma itself.

As Shakyamuni Buddha was about to die, Ananda asked him what he should rely on after his death, and the Buddha said, “Be a lamp onto yourself; make the dharma into a lamp rather than simply believing in my teachings.” The reality that has come to be called the buddhadharma didn’t belong to Shakyamuni Buddha, but rather belongs to all people who realize the dharma for themselves. It is only when we in the West realize this that we can begin to compose original sutras in our own languages, encouraging an ever-growing number of people to seek and realize the dharma.

Daigaku Rummé was ordained a Soto monk in 1978 by Harada Sekkei Roshi. He currently works at the Soto Zen Buddhism International Center in San Francisco.