Enso as defined by John Stevens, author of Sacred Calligraphy of the East. 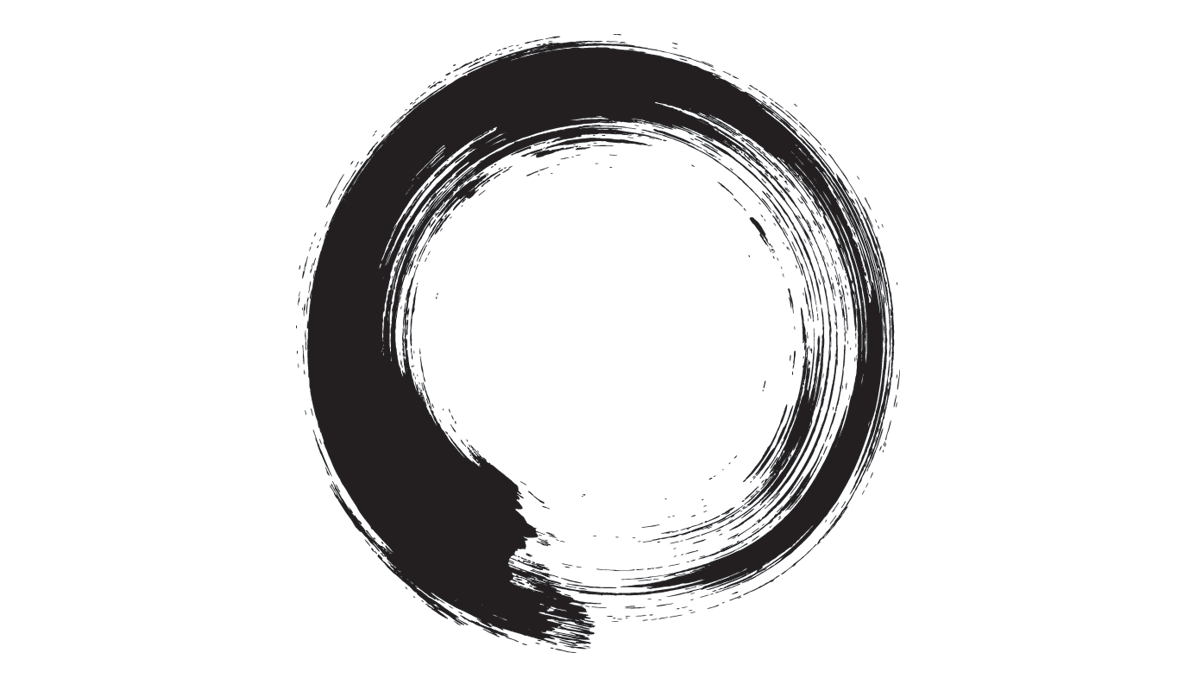 Enso, a Japanese word meaning “circular form” and usually translated into English as “Zen circle,” is the symbol supreme of Buddhist enlightenment. Right from the beginning of the Buddhist tradition, enlightenment was compared to the “bright full moon” and a “great round mirror.” In the biography of the Prajnaparamita master Nagarjuna, it states that whenever he taught in public, the master would appear as a luminous circle in order to reveal the true form of buddhanature: “Neither large nor small, neither wide nor narrow, neither good nor bad, neither transient nor eternal.” Bodhidharma, the grand patriarch of Zen, was called the “Great Teacher of Circle Enlightenment.” The Sixth Patriarch Huineng was said to have employed the use of ninety-six types of circles in his teachings. In the Shinjinmei, an early Zen text, the way of buddha is described as “a circle like vast space, lacking nothing, nothing in excess.” In short, an enso defines the Zen state of mind.

Enso can be written in the air, drawn in the dirt, or, most typically, brushed on paper. The first Zen painting was almost certainly an enso, brushed for a student who needed something concrete to contemplate, a visual expression of enlightenment. The earliest known example of an enso painting is by the Chinese Zen Master Kyozan (814-890) as recorded in the Keitokudento-roku.

Thereafter, enso paintings became a primary teaching vehicle in East Asian Buddhism, especially in Japan. Together with portraits of Bodhidharma, nearly every Zen master since the time of Hakuin has produced enso paintings as meditation aids for their students and patrons.

Each Zen master has his or her own style, and that individuality is clearly expressed in the ensos they brush. Some Zen circles are perfectly symmetrical; others are completely lopsided. Some are done in one bold stroke; others are composed with two half circles. Some are thick and massive; others are thin and delicate. Most begin in the left-hand corner of the paper, but others start at the top or bottom.

Some enso paintings are naked and mysterious, but most have an accompanying inscription to serve as a “hint” as to the Zen meaning of the circle. “In heaven and on earth I am the Only Honored One!”- Shakyamuni’s bold declaration at his birth-is a popular inscription. Enso can represent zero, so the inscriptions Mu (nothing) or Honrai muichi motsu (Originally not one thing!) are common. A famous verse from the Chinese Zen poet Hanshan-“My heart is like the autumn moon’’-indicates that the enso symbolizes the moon-mind of enlightenment. Another inscription, “Within the ever revolving circle of human passions, things come and go, come and go,” represents a wheel.

Certain inscriptions on an enso painting serve as koan: “This is your parents’ face before they were born.” Since humor is an important element of Zen, sometimes the inscriptions are more impish: “Is this the moon? A rice cake? The top of a bucket? Or maybe just the bald head of a monk!”

Nakagawa Soen (1907-1984), one of the fathers of Zen in the West, loved to brush enso. My favorite Soen Zen circle is a “sun enso,” shown here, as opposed to the much more orthodox “moon enso,” inscribed with one of his haiku: “In broad daylight/everything comes together in a circle/and bears fruit.” Enso inscriptions can always be interpreted on several levels and have different shades of meaning. Perhaps Soen Roshi means “The brilliance of the truth reveals all, nothing can be hidden, and one’s fruit-good and bad actions-will be known.” Or from a more Zen perspective, maybe he is saying, “This sun enso symbolizes the perfect clarity and all-embracing nature of enlightenment that results in awakened acts.”

The most common inscription on enso paintings, however, is simply, “What is this?” leaving the interpretation up to the viewer. After asking this question on his painting of an enso, one Zen master added, “I don’t know either!”