Jukai as defined by Diane Eshin Rizzetto, an abbess of the Bay Zen center in Oakland, California. 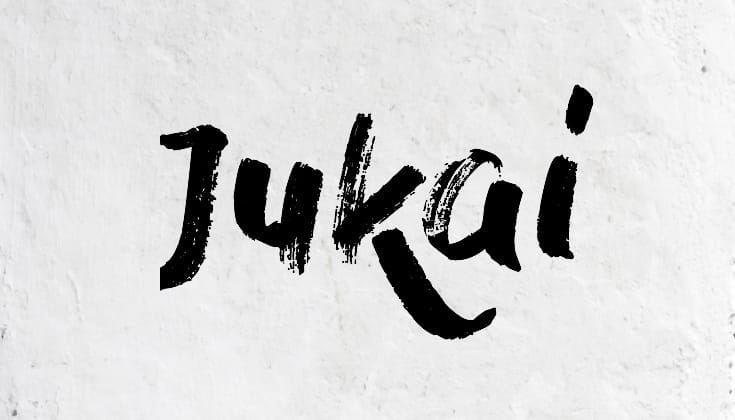 In the formal ceremony known as Jukai, a Zen practitioner openly receives and acknowledges the sixteen bodhisattava precepts as an ongoing path in their lives.

Jukai is made up of ju, “receiving/granting,” and kai, “precepts.” At a deeper level, ju means to open a space within the core of our being to what is natural and true. It is, perhaps, more like “making” a space in which the precepts can manifest as what is natural. So in this sense, ju opens to what is.

At a deeper level, kai refers to the precepts not merely as rules that keep us straight on the path, but as signposts that point us toward naturally acting for the benefit of all beings. The way of the precepts is the path of going beyond the dream of self. It is the path that reveals the truth that our own happiness and well-being is intricately connected to the happiness and well-being of others.

The ceremony of Jukai varies to fit time and place, but there are some fundamental practices. Students usually ask if they may receive the precepts, and often, but not always, participants will have studied the precepts in some depth beforehand. Jukai usually takes place at the end of a retreat. Before the ceremony, participants bathe and dress in fresh clothing. They enter the meditation hall, where the teacher, members of the sangha, and family and friends are gathered to greet them and witness their vows. After initial bows with the teacher and the sangha, there is an invocation inviting all wise and enlightened beings to stand in witness and support. Then the transmission of the sixteen bodhisattva precepts begins.

The first three precepts are called Taking Refuge. The participant acknowledges her intention to stand open and exposed, finding her resting place and taking her stand as a human being in the three naked truths: Buddha-true nature-vast, awakened, and full of potential; dharma-the teaching that brings into light the holdings and bondage of self-centered thinking and enables us to transform them to open awareness; and sangha-the community of teachers and fellow practitioners who help each other.

Having taken refuge, the participant is open to receive into her life the Three Pure Precepts: refraining from all action that creates attachments; making every effort to live awake and in truth; and living to benefit all beings.

The remaining precepts are often called the Ten Grave Precepts. These are usually worded as prohibitions, expressed as vows to refrain from specific actions-“I vow to not take what is not freely given,” or, “I vow to not lie.” This form can be useful to keep us on track when we stray into muddled thinking. Each precept can also be voiced as an aspiration: “I take up the way (or vow) to take only what is freely given and give freely of all that I can,” or, “1 take up the way of speaking truthfully.” In this way, the vows become pointers, directing us toward our natural propensity to take action out of love and concern for one another.

During the months before the Jukai ceremony, the participant will have hand- sewn a rakusu-a small patch of robe to be worn around the neck during meditation and ceremonies. Just before the ceremony, the teacher will write something on the back of the rakusu, often a poem, along with a name the teacher chooses for the student and presents as a gift that expresses the person’s qualities and positive aspirations. The participant will also often receive a kechimiyaku, a blood lineage chart naming many of the teachers in the lineage from the participant’s teacher all the way back to the Buddha. The student may be asked to write these names on the chart in advance of the ceremony.

Jukai commences a lifelong process-a confirmation of practice and commitment to a life of mindful inquiry into the motivations and consequences of our actions. As a result, we are less likely to take action that is hurtful to ourselves and others. More than simply an ethical system, the precepts open the heart and mind to the wisdom and compassion that lie deep within us all. We do not “take” them or “earn” them. We receive them as a gift that acknowledges that although we may not always act in accordance with deep intelligence, it is at the core of what we are.

In the moment of that acceptance and in each moment of our lives, whenever we aspire toward action that manifests this intelligence, that is Jukai. So even though we gather for a ceremony, where we invite our loved ones, dress in clean, fresh clothing, recite certain words, and so forth, the power of the Jukai lies in the moment-to- moment, day-by-day Jukai we engage in as we deal with the difficult boss at work, the child who keeps us awake at night with worry, and all the joys and sorrows of living.

Diane Eshin Rizzetto is the abbess of the bay Zen center in Oakland, California. and is the author of Waking Up to What You Do: a Zen Practice for Meeting Every Situation with Intelligence and Compassion (Shambhala Publications).