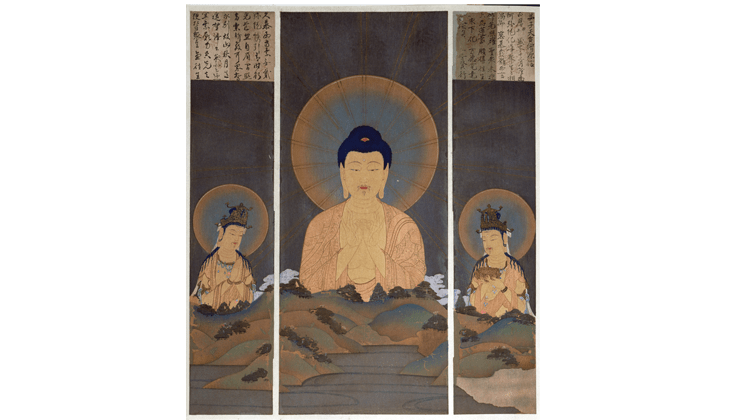 When beings awaken to buddhahood, their realization affects the environment around them. In Mahayana Buddhism, this idea was extended to assert that buddhas exist in a purified sphere of realization that reflects their blissful, enlightened perception of reality. Free of all ignorance, aggression, and attachment, this environment is called a pure land or buddha-realm.

All buddhas have such realms, and over time, Buddhists came to seek access to them. It was taught that in this pure, enlightened reality, one could meet with awakened teachers, practice the dharma, and escape from the suffering round of samsaric rebirth.

Ideas and practices related to purified buddha-realms exist in every form of Mahayana and Vajrayana Buddhism. In Theravada Buddhism, the heavenly realm of Metteya Bodhisattva plays a functionally equivalent role.

In Central and East Asia, the pure land of Amitabha Buddha is the most important. It is believed to be superior to other buddha-realms, and practices designed to enter it (either in this life or at the point of death) are extremely popular. Different sects understand it as nirvana, as a place, or as a state of mind.

There are entire schools of Buddhism centered on Amitabha and his realm. The Chinese characters for this realm can be translated as “pure” and “land,” and it is from this that the term “Pure Land” reached English. Technically, all buddha-realms are pure lands, but the term Pure Land refers to Amitabha’s realm unless otherwise specified.