In Nichiren Shu Buddhism, the gohonzon is a calligraphic scroll that can guide Buddhist practitioners toward enlightenment. 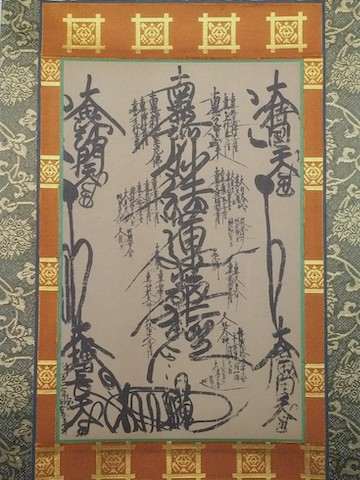 Photo courtesy of the author.

Gohonzon means “object of devotion.” There are many forms of the gohonzon in Japanese Buddhism, depending on the sect — some are statues, calligraphic writings, paintings, mandalas and artistic interpretations. In Nichiren Buddhism, the gohonzon represents the Eternal Buddha who transmitted the Lotus Sutra to everyone, and is most commonly represented as a calligraphic mandala.

Nichiren Shonin, the founder of Nichiren Buddhism, sought an object of devotion for his followers because the statues and mandalas that existed at the time did not represent the Eternal Buddha. To do this, he created a calligraphic description that incorporated concepts from the Lotus Sutra to help guide practitioners on their path to enlightenment. It also represented the ten spiritual realms: buddhahood, bodhisattvahood, pratyekabuddha (realization), sravakas (learning), heaven, humanity, asura (arrogance or anger), animality (brutality), hunger, and hell.

The gohonzon is a tool to help us focus our minds on the realization that we are all buddhas. As humans, we have a hard time concentrating due to the world’s many distractions. An object, such as the gohonzon, can help reel in our “monkey mind” and motivate us to concentrate on the dharma. It will not bestow special powers upon us or grant all our wishes, and it is not a source of idol worship. It is a mirror that reflects our inner-most thoughts.

The gohonzon is a tool to help us focus our minds on the realization that we are all buddhas.

Down the middle is the odaimoku, which is the sacred title of the Lotus Sutra (Namu Myoho Renge Kyo), written in a stylized form with the lines extending out like sun rays. Nichiren’s signature is visible underneath. To the immediate left is Sakyamuni Buddha, and to the immediate right is Many Treasures Buddha. Next to them are the Four Bodhisattva Leaders from Underground, who are said to be an infinite number of bodhisattvas who emerged from a fissure in the ground, as mentioned in the 15th chapter of the Lotus Sutra. Below them are many bodhisattvas, pratyekabuddhas (buddhas who achieved enlightenment without teachers or guides), and deities. The gohonzon also lists previous expounders of the Lotus Sutra, such as Tendai Daishi, Nagarjuna, Myoraku Daishi, and Dengyo Daishi. Included are two of Japan’s main deities: Tensho Daijin, the Shinto sun goddess, and Hachiman Great Bodhisattva, the god of war or the guardian deity.

Surrounding the four corners of the scroll are the four heavenly gods, representing each of the cardinal directions of the world. Finally, rounding out the outer-middle portion of the gohonzon are the vidyaraja (esoteric deities) with the Sanskrit symbol for Ragaraja in the middle left and the Sanskrit symbol for Acalanatha Vidyaraja in the middle right.

Anyone can sit to chant and focus on their inner buddha.

If you visit a Nichiren Shu temple, you may not see the familiar calligraphic gohonzon. Instead, statues that depict each of the buddhas, bodhisattvas, and deities will often be on display. In some cases, the statues are limited to only Sakyamuni Buddha, along with the Four Bodhisattvas from Underground. Temples also display statues of Sakyamuni Buddha seated on the left with the odaimoku stupa down the middle and Many Treasures Buddha seated on the right. Occasionally, there will either be a statue of the Eternal Buddha or just the inscription of the odaimoku itself.

In Nichiren Shu practice, we do not bestow gohonzons to anyone and everyone. The recipient must show their faith in the Lotus Sutra through their actions and willingness to study. In order to receive a gohonzon, one must pledge to become a member of Nichiren Shu and take refuge in the three treasures: buddha, dharma, and sangha. A special ceremony is held where the person makes their vows and the priest conducts an eye-opening ceremony to bring life to the scroll.

To display the gohonzon in your home, it would be best to place it in a butsudan (buddhist altar) where one could also place smaller statues and ancestor tablets. The box shape of the butsudan is similar to a stupa, which is said to be where the Buddha and deities reside. If a butsudan is not available, any respectable place in the home will do — somewhere anyone can sit to chant and focus on their inner buddha.

Shoda Douglas Kanai, Shonin is the head priest of the Nichiren Buddhist Kannon Temple of Nevada, a branch temple of Nichiren Shu. He is currently the only American priest that has completed the 100 Days Acetic Training twice.