Avalokiteshvara, the bodhisattva of compassion, has undergone many transformations over the centuries, adopting new qualities, names, and even a different gender. Kay Larson explores the bodhisattva’s journey through time and culture. 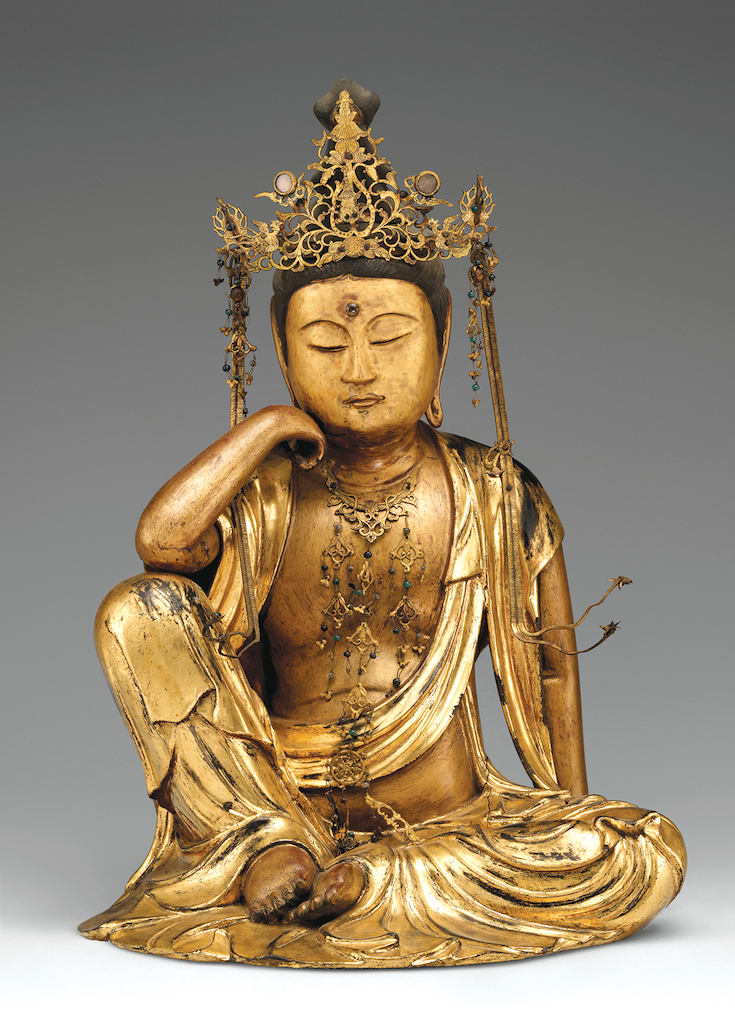 I’m surely not the only one first attracted to Buddhism by hearing a whispered song in an artwork. In 1978, The Snow Leopard, Peter Matthiessen’s searchingly honest tale of his pilgrimage into the Himalayas, left me longing for a clarity hard to name. Later, in the Japanese Galleries at the Metropolitan Museum of Art in New York, I was stunned by the Dainichi Nyorai, the Heian-period (794–1185) Supreme Buddha of the Cosmos, whose calm wooden form, subtly shimmering with gold leaf, spoke of a perfect heart of immaculate serenity and love.

The Dainichi sits in its own temple enclosure in the museum, and millions of visitors walk by it. Many see it; some really see it. “Liberation through seeing” can send a shock wave to the heart, like clutching a candle at the business end. Padmasambhava, by legend, composed instructions on six types of liberation: hearing, seeing, wearing, remembering, tasting, touching. In the bardo, hearing can remind us of our true nature. In the form world, seeing can send a flash of enlightenment directly to the liminal mind.

Enlightened compassion has a face, in Buddhist art, and a Sanskrit name: Avalokiteshvara. This great cosmic being sits in meditation, with lowered eyelids, looking inward into mind and downward to witness the lamentations of the world. Avalokiteshvara responds to an infinitude of circumstances by acquiring new qualities, putting on new robes, and accepting new names: Guanyin in China, Kannon in Japan, Karunamaya in Nepal, Lokesvara and Chenrezig in Tibet. The bodhisattva of compassion shows us how to model new ways of acting that enable us to skillfully help other beings. The many forms of the bodhisattva help us visualize aspects of mind, such as enlightenment, which are conveyed through extraordinary beauty.

Enlightened compassion has a face, in Buddhist art, and a Sanskrit name: Avalokiteshvara. This great cosmic being sits in meditation, with lowered eyelids, looking inward into mind and downward to witness the lamentations of the world.

In a finely tuned exhibition devoted exclusively to Avalokiteshvara, curator Karen Lucic, a professor of art and practicing Buddhist, recently looked at the great range of the bodhisattva’s activity and expression in time and space to tell an art-historical story as well as a Buddhist one. Embodying Compassion in Buddhist Art: Image, Pilgrimage, Practice assembled diverse representations of Avalokiteshvara—paintings, thangkas, sculptures, manuscripts, mandalas, and souvenirs of pilgrimage—from deep in the Buddhist world.

Avalokiteshvara’s history goes way back, to the rise of the Mahayana. Early in the Common Era—as Mahayana texts such as the Lotus Sutra and the Flower Garland Sutra were arriving from the Silk Road—Chinese artists shaped Avalokiteshvara in culturally specific forms: sometimes male or female, but mostly genderless. A spectacular and much-reproduced Chinese Guanyin of the Southern Sea—owned by the Nelson–Atkins Museum of Art and viewable on YouTube—is a beautiful, androgynous bodhisattva with right arm touching right knee in a casually meditative mood.

Some six hundred years after Guanyin of the Southern Sea, a Japanese artist in the Edo period slightly adapted this pose to create a dazzling little seventeen-inch-high Nyoirin Kannon (ca 1693) out of wood with gold paint and gold leaf, lacquer, and crystal inlays. In the exhibition, this magnificent deity, dressed in a bodhisattva’s intricate pendant headdress and necklace, meditates with great grace and gentleness, its right arm so curved as to be almost boneless. Softly saddened by the trouble it sees, Kannon muses in the bodhisattva’s elevated realm, its cast-down eyes bearing witness, its glowing golden form invoking the beauty of buddhanature. Nyoirin Kannon has a thin black mustache and goatee, suggesting that gender ambiguity had become intolerable in a medieval Japan ruled by shoguns and warlords.

The bodhisattva was a familiar figure at Nalanda, the great Buddhist monastery–university founded in northern India early in the Common Era. Books in Nalanda’s well-stocked libraries praised Avalokiteshvara as Lokanatha, “Lord of the Universe, he who protects the world.” Shadakshari Lokeshvara—poised between rows of text from the Ashtasahasrika Prajnaparamita (Perfection of Wisdom) Sutra—glows in gem-like colors painted with opaque watercolor on a palm leaf. The exhibition displayed five similar palm-leaf pages from a book that migrated to Tibet before Nalanda was looted and burned by Turkish invaders in the twelfth century.

In the first 1,500 years of the Common Era, oases such as Dunhuang in the Taklamakan desert west of China became cultural crossroads frequented by travelers of many civilizations: Tibetan, Indian, Uyghur, Tangut, Khotanese, Tocharian, Chinese, Caucasian. (Marco Polo was neither the first nor the only European to travel to China.) In these hard-pressed environments, Buddhism was an agent of change. Books and images, as well as Buddhist practices from the monastery–universities, broke through the isolation and insularity of tiny desert communities. The world was clearly bigger than anyone realized.

In turn, the Buddha’s teachings on emptiness were evolving in these conditions of intensive practice. Master meditators realized that shunyata (emptiness), so dark to the human mind, is actually populated with subtle energies of enlightenment, wisdom, and compassion—buddha fields filled with sublime beings. The Prajnaparamita Sutra underwent spiritual surgery and became the Heart Sutra. In the first scene of this short but majestic sutra, Avalokiteshvara presents the pith teachings of shunyata to the Buddha’s disciple Shariputra. The presence of Avalokiteshvara tempers the Heart Sutra’s overwhelming invocation—“form is exactly emptiness, emptiness exactly form”—with the suggestion that empty-to-the-mind vastness is filled with the immense compassion of the bodhisattvas.

The story of Buddhist art is thus a sophisticated travelogue—much less neat and linear than in Western art, much more conditional and chaotic. As Guanyin evolved during the first millennium in China, the bodhisattva began to exhibit traditional female traits such as kindness and thoughtfulness. A fourteenth-century Chinese ink painting describes her as a ghostly, white, meltingly contemplative figure whose trailing robes drape over a mountain ledge. Gazing at the moon, Guanyin—cat-like and nearly formless in diaphanous garments—seems to be turning transparent and wraithlike, as though contemplating the emptiness of all worldly ambition.

Jesuit missionaries, bringing their Christian evangelism to China around this time, began circulating images of the Madonna and Christ Child, inspiring yet more cross-cultural borrowing. A Chinese variant of Guanyin called Songzi balances a child on her hip. Carved in sandalwood or other soft woods, or cast in clay like a votive offering, Songzi would have been painted, often with gilding. Like the Virgin Mary, Songzi knows a woman’s plight.

In a five-foot-tall Edo-period painting on silk, Kannon, the Japanese bodhisattva, becomes motherly in a different way. The formidable yet kindly celestial female reclines on the rocky shore of the legendary island Mount Putuo, where she is said to dwell. A fold of her bulky headdress shelters a miniature Amitabha, the Buddha of Boundless Light, Kannon’s higher power. A chubby boy-like pilgrim wades through the surf at her feet, his hands joined in reverence. He and others like him have come a long way to find her. Clearly pilgrimage is more than just “sandals on the ground.” The act of searching changes the searcher.

In the Himalayas, enlightenment is the great path, the way to save beings surely and effectively. The tantric power and forthright majesty of Eleven-headed Avalokiteshvara radiates laser-like focused energy. The eyes exhibit the fierce concentration created by advanced tantric practices. This Chenrezig will burn through all obstacles. The gilded bronze statue, now owned by the Jacques Marchais Museum of Tibetan Art, is a reduced-scale replica made for pilgrims who thronged through the Jokhang temple in Lhasa. The original, a towering Mahakarunika, occupies the temple’s Supreme Compassion Chapel. Mahakarunika has its own exalted Great Compassion Mantra, which is repeated at great length in the practice of Thousand-armed Chenrezig.

Compassion is the wish that all beings be free from suffering. But suffering takes many forms, and many resources are needed to combat it.

Mahayana practices make a special point of grounding compassion in the wish that all beings be free from suffering. But suffering takes many forms, and many resources are needed to combat it. The task can seem overwhelming for us mortals. There is a resonant story about how Chenrezig got his thousand arms. The bodhisattva vowed to clean up samsara once and for all. He put in a heroic effort. He thought he’d done it. But when he turned around again, the mess was back, unapologetically.

Chenrezig was so devastated by his failure to fix things that he shattered in a thousand pieces. That moment when you turn to glass, when paralysis is the only response you can manage, when ignorance raises its angry head and the suffering it causes seems medieval in its ugliness—this is Chenrezig’s dilemma too. A tap of the hammer and glass shatters into spikey slivers. What to do when even a bodhisattva of compassion can’t bear it any longer?

The story takes an instructive turn. Amitabha, the Buddha of Boundless Light, comes down from his Pure Land and converts Chenrezig’s thousand shattered pieces into a thousand arms (plus eleven heads, so he can look in all directions). I find it hugely instructive that Amitabha gives Chenrezig a thousand tools and says, Hey, keep going.

Chenrezig’s thousand arms are a token expression of the patience and fortitude essential to the bodhisattva vow. As our world prepares to blow itself apart yet again, Chenrezig becomes more than just a symbol; the bodhisattva is an absolute necessity, a guide and refuge.

For two thousand years, art has been a powerful means of transmitting the dharma. It serves this purpose today as well. Our humanity and our buddhanature are indivisible—not only spiritual, not only physical; both empty and full of life—and the great art we create is similarly “not two.” The heart of Buddhist practice is beyond words, yet words and images help us shape and embody subtle realms of mind and convey intuitive truths we yearn to realize. It’s almost impossible to imagine the Buddhist path without them.