If you’re Buddhist, or have friends who are, you may have heard of practices involving the deity Tara, but who is she exactly? Three Buddhist teachers weigh in. 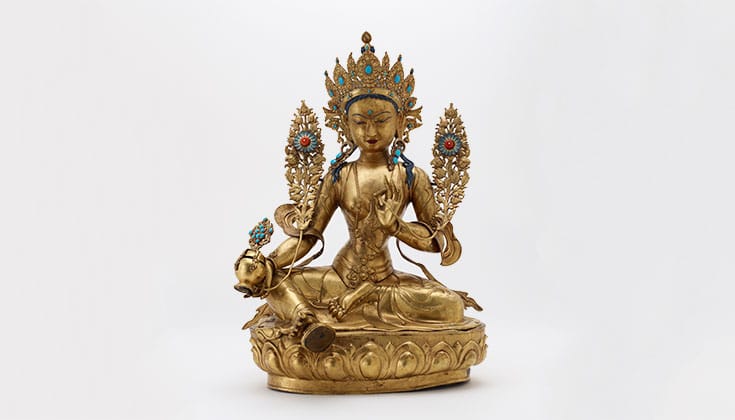 Tara is a common figure in Tibetan Buddhism. As Lama Palden Drolma explains in her teaching Tara the Liberator, Tara “is ‘she who ferries beings across the ocean of samsara.’” She writes:

Tara is the most beloved by Tibetans of all the female awakened beings. Her praises are sung and she is supplicated in all Tibetan monasteries and by many laypeople as well. Tara is renowned for her swift and compassionate activity. Whether devotees have worldly or spiritual motivation, Tara gives benefit to all and leads people to awakening.

The Tibetans call her Jetsun Drolma. Drolma is Tibetan for the Sanskrit word Tara. Je means the power to liberate others; tsun means that she benefits herself and all others, that she is beyond samsara, and that she has the stainless wisdom body.

Furthermore, in an article titled Enlightenment in Female Form by Gelek Rinpoche, published in Buddhadharma: The Practitioner’s Quarterly, he introduces Tara this way:

We find images of Tara throughout Eastern culture, although she may be referred to by different names. In China, she is called Kuan Yin. In Japan, she is Kannon. In Tibet, we call her Drolma. Tara is her Sanskrit name. It means “one who liberates.” Tara is known as the “Mother of all buddhas.” She is especially associated with long life and wisdom. And as a female manifestation of the enlightened energy, Tara is said to come to our aid quickly and powerfully.

Gelek Rinpoche goes on to explain that enlightenment is possible only when female and male energies are both fully present. Using Tara practice, he says, can bring enlightened female energy into our lives.

Lastly, in Tara, the First Feminist, Lama Tsultrim Allione explains that though she’s faced challenges and sexism in her life as a teacher, Tara’s vow to work for the benefit of all beings in a woman’s body has been a source of guidance and inspiration.

The story tells us that Tara was a princess named Wisdom Moon, who was very devoted to the dharma and had a deep meditation practice. She was close to enlightenment, raising the intention to reach enlightenment for the benefit of all beings, when a monk approached her and said what a pity it was that she was in the body of a woman, because she would have to come back as a man before she could become enlightened.
The princess answered back brilliantly, demonstrating her understanding of emptiness and absolute truth, saying, “Here there is no man; there is no woman, no self, no person, and no consciousness. Labeling ‘male’ or ‘female’ is hollow. Oh, how worldly fools delude themselves.”