Ikumi Kaminishi looks at regional differences in sculptures of the Buddha. 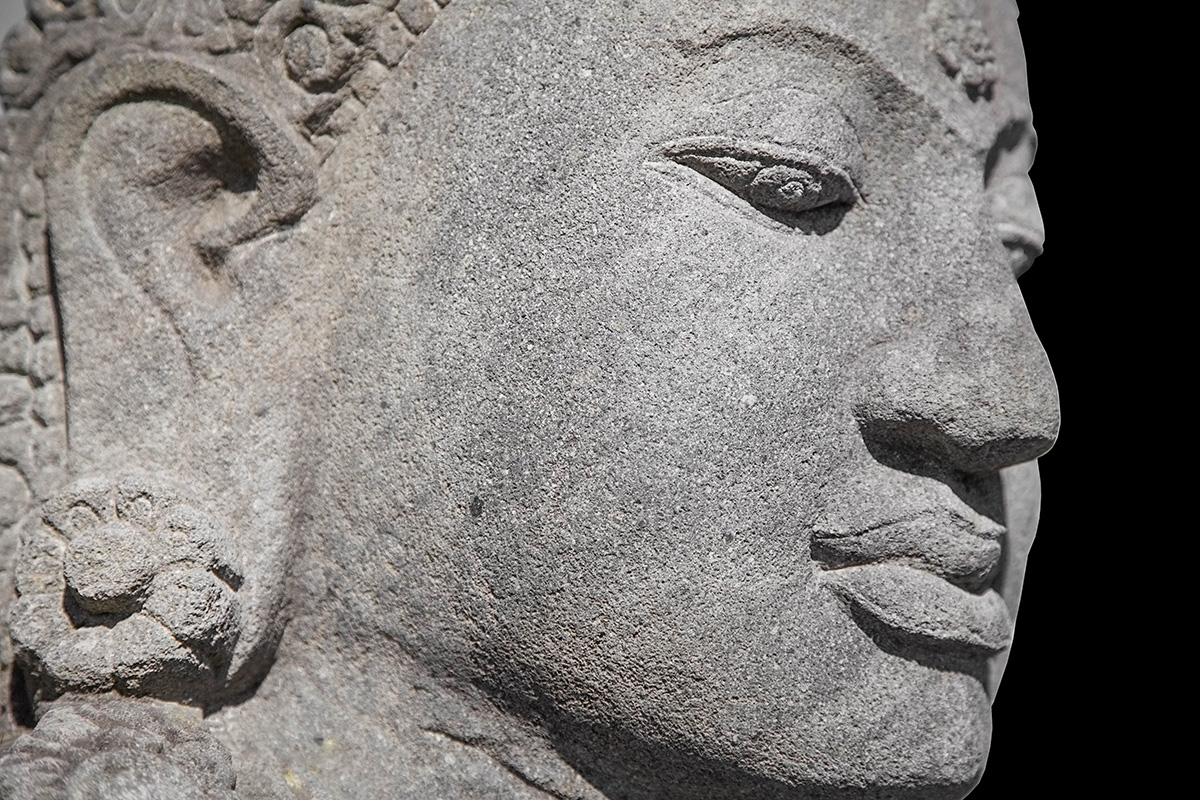 When Buddhism spread from Siddhartha Gautama’s birthplace in today’s Nepal to many parts of Asia, texts were often translated into local languages to make the teachings of the Buddha accessible to different peoples. Was Buddhist art and imagery also “translated” into local artistic styles? Yes. As the examples of some different styles below show, changes in how the Buddha was portrayed tell us fascinating stories about different artistic styles, local cultures, and even the evolution of Buddhist beliefs.

Beyond the material differences (schist, sandstone, granite, copper, and wood), these five statues from South, Southeast, and East Asia exhibit stylistic differences and cross-cultural, even cross-religious, byproducts. Images of Siddhartha develop new identities—a Buddha, a bodhisattva, a teacher, a mountain ascetic, and even a Confucian official—to assist local audiences on their path to enlightenment. 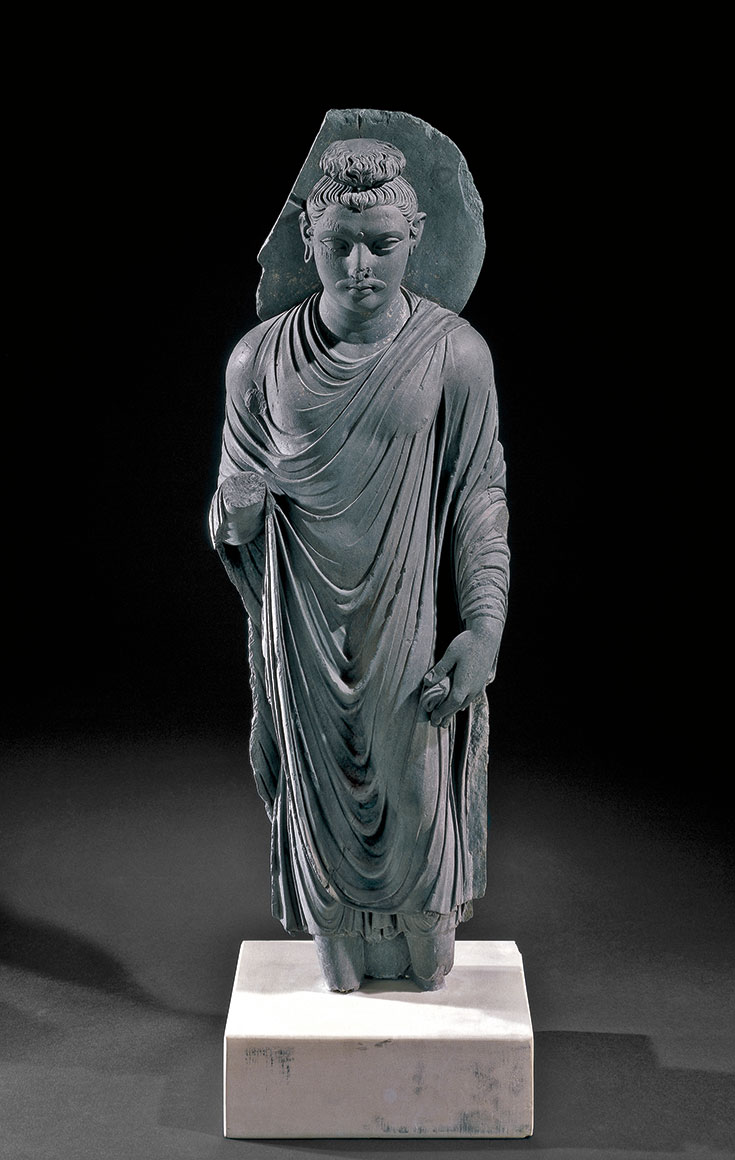 Fig. 1. This standing Buddha in the Gandharan style is one of the earliest images of Siddhartha in human form. Previously he had only been represented by symbols such as a wheel or footprint. Standing Buddha. Kushan Dynasty, 2nd–3rd centuries C.E. / The British Museum, London

This Standing Buddha (fig. 1) is one of the earliest images of Siddhartha. It depicts him as an enlightened one, wearing monastic garb (sanghati), holding its hem in his left hand. His topknot (ushnisha), a dot-like tuft of hair on the forehead (urna), and his elongated earlobes help identify this figure as Buddha. The missing right hand may have formed the “fear not” mudra. An appearance devoid of adornments affirms Siddhartha’s renouncing his royal status and worldly possessions.

Depicting Siddhartha in human form was a new trend in the first century CE. It was a departure from the older Indian tradition in which metaphorical symbols substituted for the human presence of Siddhartha: the Bodhi Tree represented enlightenment, the wheel Buddha’s teachings, etc.

This artistic shift coincides with the establishment of the Kushan Dynasty (30–375 CE), with its capital at Begram in Gandhara (today’s northern Pakistan). Gandhara is the easternmost area that the army of Alexander the Great conquered in 330 BCE. This led French scholar Alfred Foucher in 1905 to attribute the source of the anthropomorphic Buddha to Greek (Hellenistic) art—he named the trend “Greco-Buddhist art.” Gandharan buddhas’ stylistic similarities to Greek sculptures—including the Buddha’s European countenance with high bridged nose, wavey hair, and mustache; classic contrapposto (bodyweight on one leg while other relaxed); and a toga-like sanghati—helped his argument.

This theory of Western inception, naturally, did not sit well with scholars from the East. A counter-theory, proposed by Ananda Coomaraswamy in 1927, declared the Indian origin of the human-form Buddha. His investigation focused on the sculptures from Mathura, Kushan’s second capital in northern India and a well-established pre-Kushan artistic center. 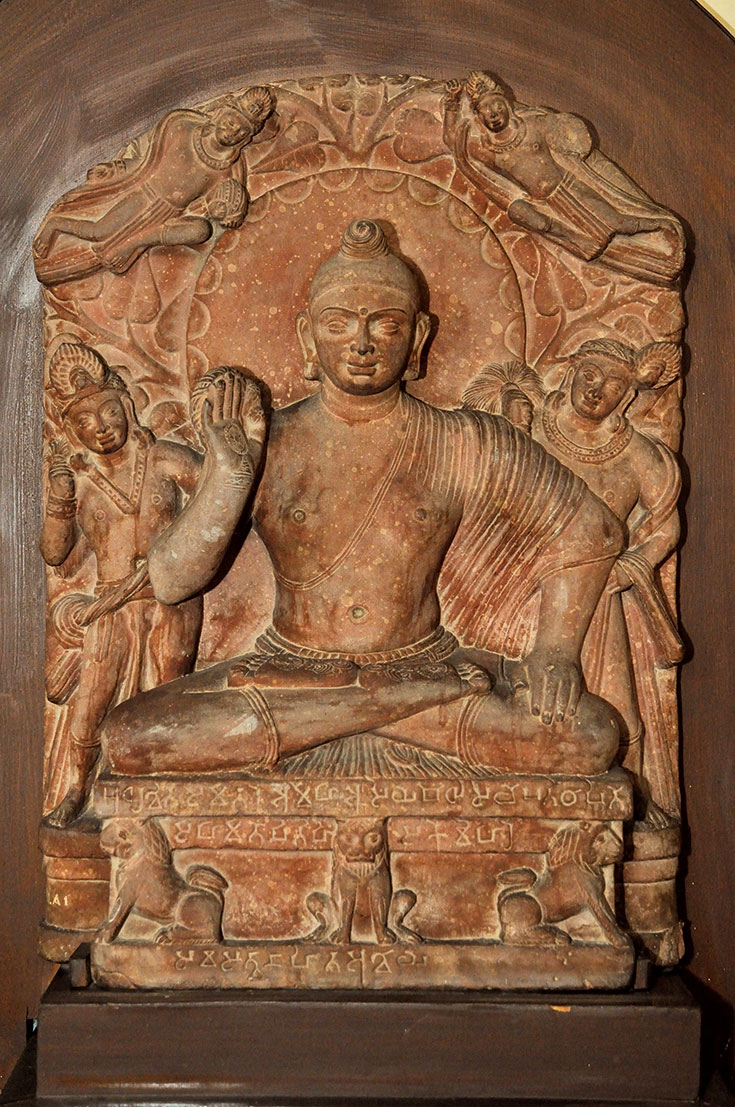 The Seated Buddha (fig. 2) from Katra mound demonstrates the Mathuran sculpture style, carved on the local red sandstone. The Buddha’s perky appearance, with his round face and fleshy, ample torso, exhibits the region’s robust aesthetics, which go back to Mauryan-dynasty art (322–185 BCE). The youthful air of the Mathuran Buddha contrasts with the reticent mien of the Gandharan Buddha.

Iconographically, this statue is of the Buddha, who wears no jewelry, holds his hand in the “fear not” mudra, and bears wheel symbols on his palm and soles. But according to the donor’s inscription on the base of the throne, the image is of a bodhisattva. This confusion may derive from still developing iconography, or reflect a local tendency to envision Siddhartha as a bodhisattva.

A schism among Buddhist practitioners led to the formation of two major schools: the Theravada and Mahayana. The Theravada tradition, which spread throughout South and Southeast Asia, emphasizes the individual’s monastic path to enlightenment. This led to more images of Siddhartha as a monk than as a bodhisattva. 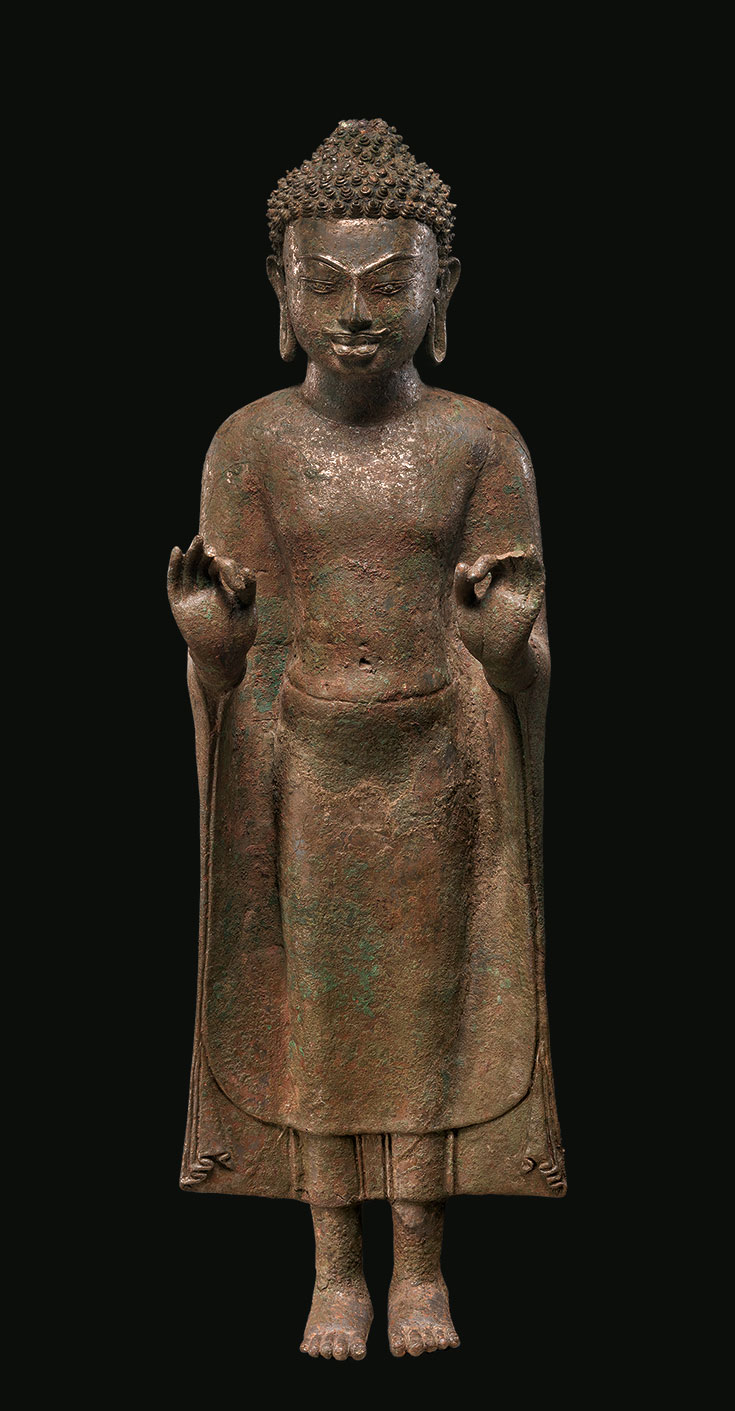 Fig 3. This copper statue from Thailand portrays the Buddha teaching the dharma. Reflecting the Theravada Buddhism of South and Southeast Asia, the Buddha is seen in the robes of a monk. Buddha Preaching. 8th century, Northeastern Thailand / The Metropolitan Museum or Art

A special regional feature appears on the hands: each forms a ring with the thumb and index finger, raised to the chest. This mudra, called the vitarka (teaching wheel), modifies its Indian predecessor that positioned the hands asymmetrically with the right hand raised and the left hand resting on the lap. The parallel and symmetrical positioning of the wheels displays the regional characteristics specific to the Mon ethnic group’s Dvaravati Kindom in today’s central Thailand. The vitarka gesture symbolizes the Buddha’s teaching, as he is said to have “turned the dharma wheel” when he taught his first sermon. Incidentally, this hand gesture would later appear in images of Amida Buddha in Japan. 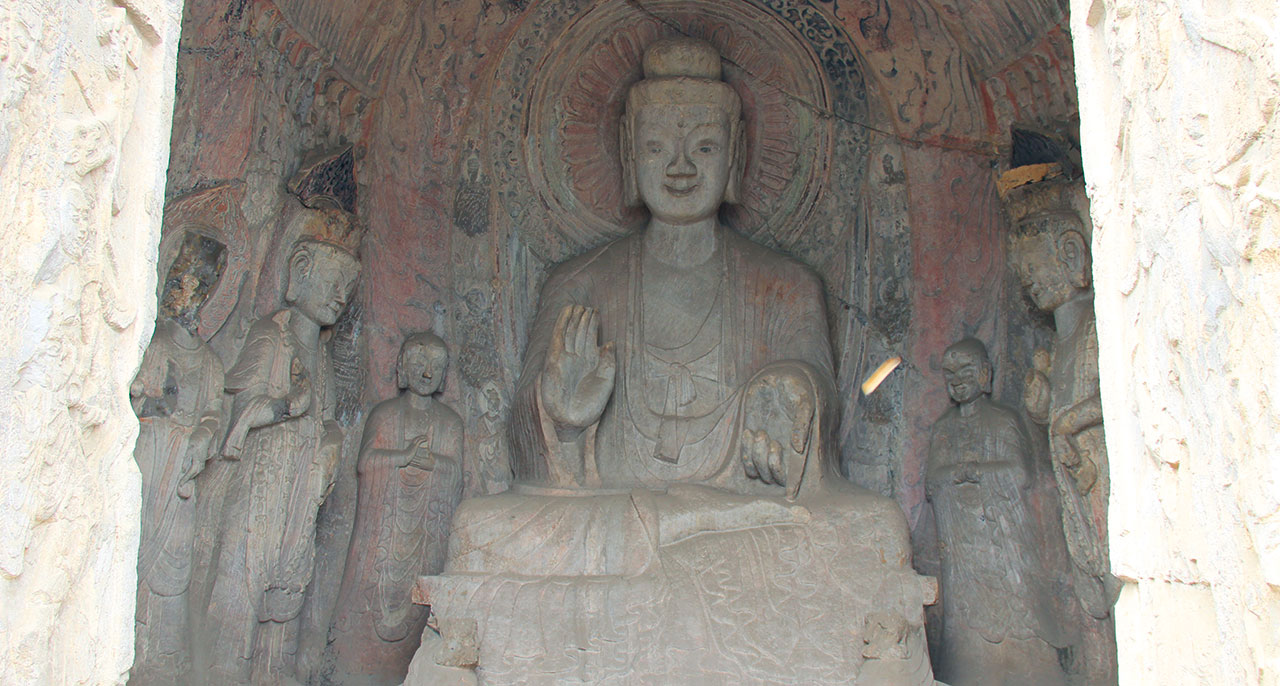 Fig. 4. Buddhas are often portrayed in ways connecting them to local cultures and religions. This 6th century Chinese Buddha wears the robes of a Confucian teacher. Shakyamuni Buddha, Ca. 520 / photo by Gary Todd via flickr.com

The first regime that supported Mahayana Buddhism in East Asia was the Northern Wei dynasty (386–535) in China. The stone carving Shakyamuni Buddha (fig. 3) at Longmen’s Binyang Cave demonstrates how Indian art became Chinese. Emperor Xuanwu ordered the cave constructed in honor of his parents, a Confucian filial act, and his heir, Emperor Xianming, completed it in 534.

The seated Buddha on a lion throne shares iconographic traits with the Mathuan Buddha but departs in overall appearance. The bulky and stiff Binyang Buddha and his company wear official Confucian ceremonial robes. This Shakyamuni takes a guise of a Confucian teacher to reach out to a wider Chinese audience. 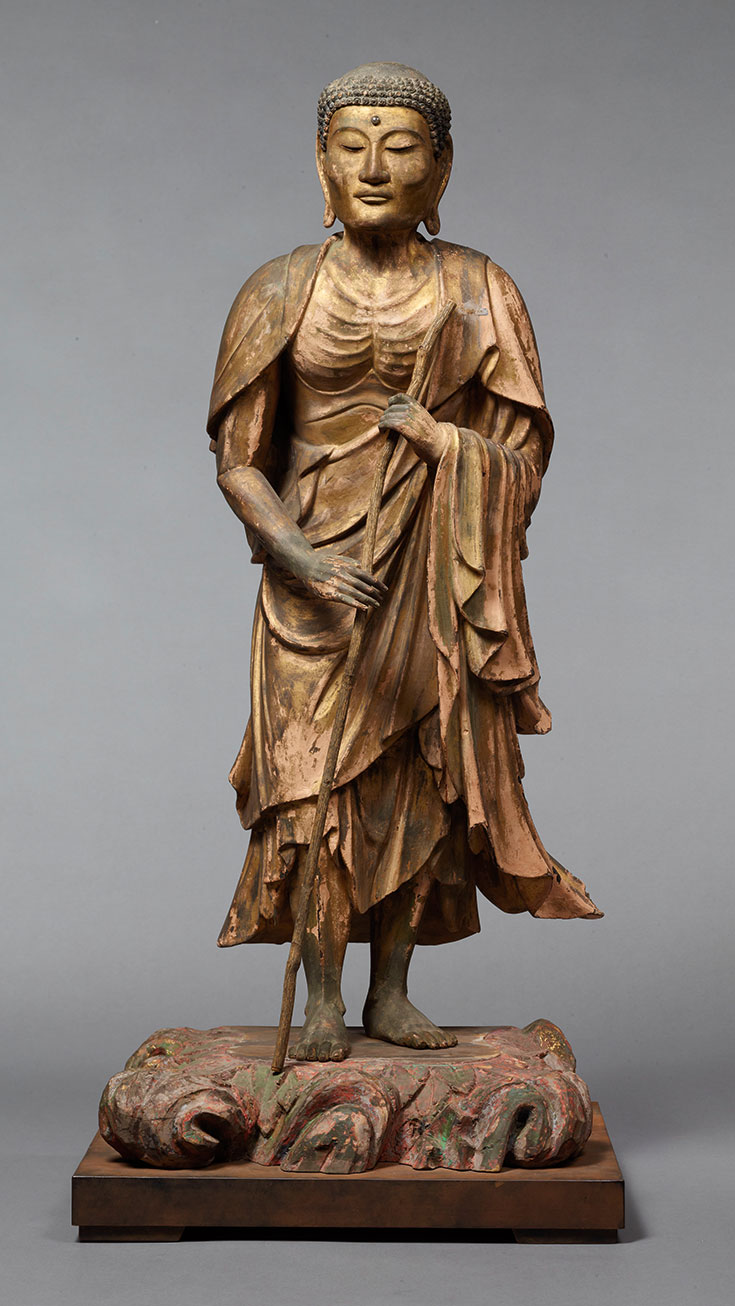 Fig 5. Zen Buddhism attracted Japanese elites who valued its emphasis on training and self-discipline. This statue portrays Siddhartha in his ascetic period before he discovered the middle way between self-indulgence and self-denial and achieved enlightenment. Siddhartha Descending the Mountain, 14th century / Courtesy of Nara National Museum, Nara, Japan

As Mahayana Buddhism further divided, it established new branches. Zen Buddhism, originally Chan in China, attracted the elite military class in Kamakura and Kyoto in Japan. Zen’s emphasis on training and self-disciplining resonated among warriors. In such a milieu, Zen practitioners saw enlightenment not as a goal but a process.

Siddhartha Descending the Mountain (fig. 5) from Fukuzo-ji monastery depicts Siddhartha not as a buddha but as a human who perseveres through ordeals. It portrays Shakyamuni’s disappointment for not reaching enlightenment despite his ascetic training, a popular subject in Zen. His glass-inlaid eyes, a Kamakura-period artistic invention, indicates energy, while his hollow-cheeked face and exposed ribs reveals his austere asceticism.

Depicting the emaciated, ascetic Siddhartha has Kushan-dynasty precedents that portrayed Siddhartha as a meditating skeleton. Resorting to hyper-realistic mode, Kushan art reminds us of Siddhartha’s teaching of the middle path between the two extremes of indulgence and austerity.

Ikumi Kaminish is an associate professor of the history of art and architecture at Tufts University. She specializes in Buddhist art.