When the guy driving the late-model Volvo with a “War Is Not the Answer” bumper sticker gave me the finger, I knew America had taken a wrong turn. 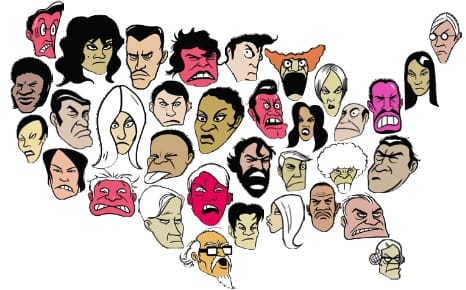 The behavior of this hostile L.A. hippie represented more than a traffic kerfuffle. A Volvo with that kind of bumper sticker is a signifier: college graduate, votes Democratic, listens to NPR, and will think about moving to Canada if a Republican becomes president, or at least attend a dinner party where another guest will talk about it. In other words, we are not dissimilar, and we’re reasonable people, aren’t we, this paragon of liberalism and I? And here he was, my sociocultural doppelgänger, thrusting his middle finger at me, bespectacled, professorial face contorted in rage. Yes, I had accidentally cut him off on Olympic Boulevard—He was in my blind spot, Your Honor!—but did the sixties not happen? Did he not at some point also own a vinyl copy of Sweet Baby James? Are we not brothers?

From the perspective of a blue state resident, it’s easy—and facile—enough to ascribe the anger percolating in America to the political ascendancy of the right. The enviable market share of Fox News and the conservative monopoly of AM talk radio all speak to their dominion. But this is misleading. Perhaps the manner in which they express their rage is more colorful (thank you, Tea Party costume department), but, as my Olympic Boulevard encounter illustrates, anger is everywhere. People talk about the mainstream media’s sense of misguided fairness that makes them treat both sides equally, but here is a fact: America is furious.

The left became unhinged when George W. Bush was elected. Admittedly, given the Florida recount, the worst recession in sixty years, and the most foolish American war since, well, ever, there was something to be angry about. But the hatred expressed toward him was profound; it felt new and stronger than the opprobrium heaped on Reagan when he was in office. Interestingly, even with all of the anger toward Bush, the left pretty much stayed home while he was in the White House. There were a few economic demonstrations and some antiwar activity, but it paled compared to how people hit the streets during, say, the Vietnam era.

Charles Krauthammer dubbed this Bush Derangement Syndrome (BDS)— basically ascribing all the world’s ills to the president— and it has become deeper, crazier, and more active now that the virus has migrated from left to right and its symptoms are projected onto President Obama. How else to explain the Tea Partiers, who had no problem with Bush’s vast spending, claiming Obama’s fiscal habits are a danger to the republic? Or the characterization of this barely left-of-center politician who has treated Wall Street with kid gloves as some kind of socialist class warrior and aspiring tyrant? This epic level of anger is most visible on the level of national politics, but it has trickled all the way to the bottom. By bottom I am referring not only to the guy in the Volvo who gave me the finger but also to the comments section of any website that allows them. The Internet has enabled the anger, allowing it to spin like a Catherine wheel, spreading toxicity everywhere.

Why is America so angry?

Someday, someone will write a book about how we arrived at American apoplexy, but for now let’s be more forward-looking and consider what some people are doing about it other than consuming massive levels of prescription medication.

One of the things they’re doing is meditating. This explains the rise of what is known as applied mindfulness, which offers practices to develop the capacity to deal with their anger skillfully. People from many religious backgrounds have engaged with this work without giving up their own spiritual identities. They can celebrate the High Holidays and still meditate each morning without annoying their rabbis. They can sing hymns and eat fruitcake at Christmas while still attending their sitting group. Chances are you or someone you know practices a form of meditation. Major universities are researching the effects of these practices. Young children are being taught mindfulness, and not just the ones on Adderall.

Apart from scale, anger is no different on the national level than it is in preschool.

When little Emma takes Jacob’s toy truck, Jacob’s anger springs from his thwarted need to possess the object. He is thinking about what he wants, or thinks he wants. Emma, of course, is thinking about what she wants. A fundamental Buddhist belief is that all people want to be  happy and, at root, all of our actions, even angry ones, come from that fact. So this kid thinks the truck will make him happy, when really what is probably going to make him happier in the long run is having a friendly relationship with Emma.

Mindfulness, as it happens, is a remarkably effective way to deal with anger. Anger is about my needs. When you get angry, here’s what you’re really screeching: What about ME? The Tea Partiers who hate Obama are really upset because THEIR ideas about economics are so much better, and why doesn’t he see that?

The hostile left-wing Volvo driver might be shocked to hear it, but he’s not so different from Rush Limbaugh: both lack a filter with which to screen their bile. Meditation practice provides this filter by training us to be nonreactive, to consider our actions, to “check in” and directly experience how we feel physically and emotionally before acting on it. They teach us to see the larger world and our place in it more clearly, and to experience what we are feeling with some degree of awareness.

We don’t need to become Buddhists to deal with our anger but everyone can benefit from what Buddhists have learned from millennia of training. These practices are not a panacea or a cure, but a process through which we learn to see our emotions as dynamic and changing. By undertaking this work, we are less likely to give the finger to the next hapless driver who accidentally cuts us off. Or start a war.

Seth Greenland is the author of three novels, including The Angry Buddhist, and was a writer-producer on the HBO series Big Love.