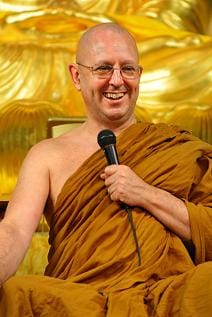 Go beyond words, the Wisdom Publications blog, currently features “History in the Making,” a guest post by editor David Kittelstrom regarding (in part) the expulsion of bhikku Ajahn Brahmavamso (a.k.a. Ajahn Brahm) from the Wat Pa Phong Sangha.

The first Theravada bhikkhuni (nun) ordination in Australia, and the first in the Thai Forest Tradition anywhere in the world, was performed in Bodhinyana Monastery in Western Australia on October 22nd. Four nuns from the nearby Dhammasara Nuns Monastery took ordination: Vayama, Nirodha, Seri, and Hassapañña. The second half of the ordination ceremony was performed by Wisdom author Ajahn Brahm—the abbot of Bodhinyana—along with other monks from the monastery.

[…] The historic event drew a severe reaction from conservative lineage holders in Thailand. The monks of the Ajahn Chah tradition headed at Wat Pa Pong complained that they had not been consulted and called Ajahn Brahm to a meeting in Northeast Thailand this past Sunday, November 1st, where they voted to expel him from the Wat Pa Pong community.

The Buddhist Channel reports on a statement from Wat Pa Nanachat, a Buddhist monastery in Thailand, explaining their reasons for the expulsion of Ajahn Brahm from the Wat Pa Phong Sangha. According to the statement, “Ajahn Brahmavamso reneged on commitments implicit in his ownership of a Thai monastic passport, his role as abbot of a Wat Pa Phong branch monastery, his position as an officially sanctioned preceptor, and his acceptance of the Jow Khun title (formalizing his membership in the elite strata of the Thai monastic order).” See the full report here.