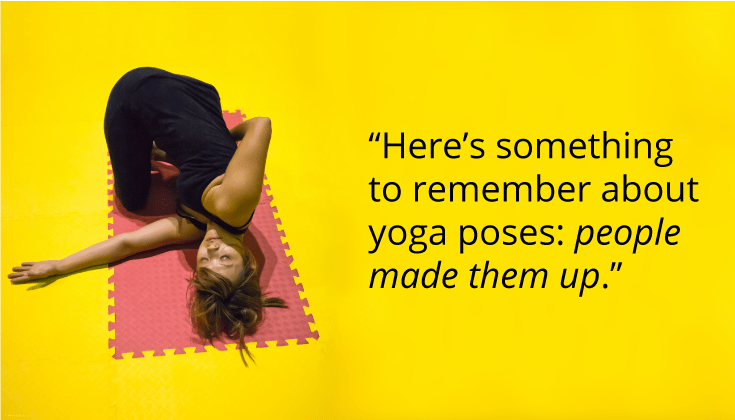 For Christmas a few years ago, my partner, Teja, gave me a round yoga mat about six feet in diameter. When I spread it out and began to practice—by the twinkle of the Christmas tree lights—I was amazed at the way my asanas transformed. My gestures became rounder, less angular. I took up more space. I spiraled and spun. To my astonishment, I realized that my thirty years of yoga practice had been unconsciously shaped by the boxy confines of a six by two-and-a-half foot rubber rectangle.

There’s nothing wrong with a rectangular mat, of course. They’re useful and practical tools. And a circular mat would reveal its own limitations, in time: why am I not flowing through the whole room? Why am I not flinging open the windows and doors, and dancing through them?

A yoga mat is only one way we may unconsciously box in our journey of awakening by outside forms. The yoga poses themselves, when practiced rigidly or unconsciously, can become constraints on our freedom rather than means for unfolding. A meditation practice can become just one more way to try to establish ourselves as the supreme dictator over our inner world—and then beat ourselves up when we don’t succeed.

Here’s something to remember about yoga poses: people made them up.

Some of them were made up a long time ago—hundreds or even thousands of years. A lot of them—including many that we think of today as “classic” yoga poses—were invented by Indian yogis in the early part of the 20th century. Some were imported from places as diverse as YMCA exercise classes and Swedish gymnastics—and then given Sanskrit names. Some were invented as recently as last week. There is nothing inherently sacred about any of the postures that you’ll see arcing and twisting on yoga calendars. What makes them sacred is the way we inhabit them.

There are really only so many ways the human body can move, and people in different cultures and different eras have probed those limits. It seems likely that the earliest forms of asana practice were spontaneous eruptions of movement from deep meditative states, the trembling of psycho-spiritual energy through the body releasing into movement. Then hatha yogis began imitating and systematizing those spontaneous movements in order to access the states that had originally inspired them.

I don’t say this to denigrate the formal yoga asanas we commonly practice today, which are powerful tools for transformation that shape the body —and the psyche—over a lifetime of practice. They are an extraordinary expression of the possibilities of the human body, a fountain for inner energy, and vehicles for exploring our inner world.

But what we think of as a “pose” is just a moment of flow frozen in a snapshot. It’s no more or less significant than the moment that came right before it. Snapshots are evocative ways to perpetuate memories: You’re glad you have that photo of you and your best friend toasting your birthday in the cabin in Yosemite. But the photo doesn’t show what happened a few minutes later, when a black bear broke in and took the whole door off its hinges.

So in your practice this week, invite yourself to let go of any fixation on form, so you can really feel your body moving from the inside. Sensations are the language of the body. Listen to your own body’s story as if hearing a friend confide secrets she’s never shared before. Tune to the parts of your body that are crying out to be heard—and also to those areas that may have been numbed into silence.

Move from feeling—and allow your movements, in turn, to bring more feeling to areas that may be invisible to your awareness. Fully inhabit your body—opening locked rooms, exploring hidden crannies, flinging open the shutters in airless garrets.

Practice your yoga as a way of opening the boxes you have put yourself inside, not jamming yourself into more of them. What other shapes have you forced yourself into in your life? Where else might your perception of how freely you can move be constrained by other people’s conventions?

Along the way, you’ll uncover parts of your body that are stuck, injured, or vulnerable. Be with them with particular tenderness—not as obstacles to success, but as gifts to be unwrapped. Ask them how they want to be healed or released. By being with yourself in this way, you are expanding your capacity to attend your inner world with kindness and sensitivity —a capacity that will serve you well as you turn your attention to more and more subtle aspects of your experience.

Remember, it’s not just structures and alignment that you are feeling into. Yes, you are tuning in to your proprioception of bones and organs and muscles and skin, and their optimum relationship and function. But as you go deeper, such anatomical distinctions begin to dissolve. Your body emerges in your awareness as a shimmering field of sensations—arising and disappearing like bats swooping under a streetlamp. What you think of as hand breaks down into a pixellated field of dancing detail, just as an impressionist’s painting of a lake is composed of thousands of tiny dots of color.

Use the conventions of the yoga asanas as chisels to open your range of movement, build your strength, and awaken your body’s intelligence. But then move through them and beyond them. They are a trail map helping you navigate a majestic wilderness. But don’t confuse them with the silver river flowing between granite cliffs, or the red-tailed hawk soaring over them, clutching a fish in its talons.

Don’t just tramp down the well-traveled fire-roads of a familiar pose. Instead, meander down all the deer trails. Stop at a hidden beach for a picnic. Sit on the sand and listen to sea gulls call, and take a bite of an apple you pluck off an overhanging branch—sweet and crisp and tasting of rain and eternity.

For a selection of free, downloadable guided video mindful yoga and meditation practices by Anne Cushman, go to www.annecushman.com/practices.

From “Moving into Meditation,” by Anne Cushman, © 2014 by Anne Cushman. Reprinted by arrangement with Shambhala Publications, Inc., Boston, MA. www.shambhala.com