A tail, a bundle of guts, and a smear of blood—how one dead rat continues to inspire Anne Cushman’s practice. 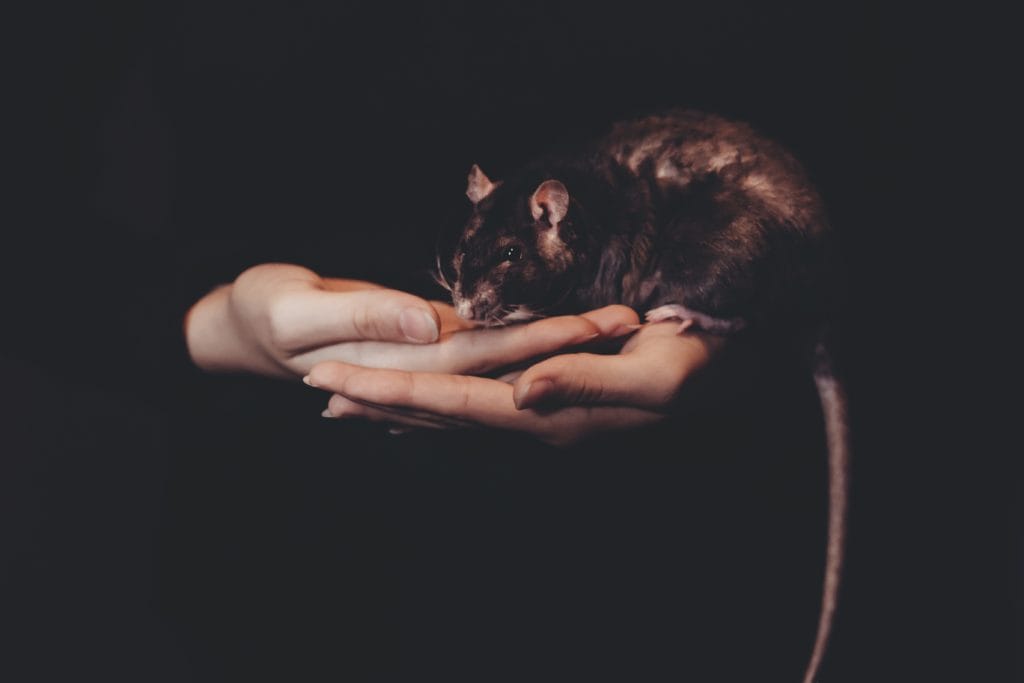 A few months ago my cat killed and ate a large rat on my yoga mat. In case that sounds like the opening line from a particularly morbid Dr. Seuss story, let me back up and explain: I love to do yoga and meditate outside. So every morning—weather permitting, which is much of the year here in northern California—I spread out my mat and zafu on my deck in a leafy temple of oak and bay and madrone. And I bow across the valley to Mount Tamalpais, whose sensuous silhouette suggests a woman lying on her side.

As I flow and breathe, I open my senses to the world. Dry leaves and sticky sap and tiny green gypsy-moth caterpillars fall on me. Roosting doves pelt me with acorns and an occasional splatter of droppings. Jays shriek insults at squirrels; a neighbor’s jackhammer throbs; hummingbirds whir through the crimson blossoms of pineapple sage. The air smells of damp soil and rosemary.

And, once, when I accidentally left my mat out overnight, my cat Tahini used it as a slaughterhouse. All that was left when I came to my practice the next morning was a tail, a bundle of heart and guts, and a smear of blood. I buried the rat’s remains in the nearby garden, next to the statue of Prajnaparamita, the mother of all the buddhas. I also wiped clean the mat. (Okay, so I know what you’re thinking: Remember never to borrow her yoga gear.) But the image of the rat has stayed with me—a potent reminder of the koan that I face as a Buddhist hatha yogini. Yoga, like Buddhism, is a discipline whose ultimate purpose is to awaken us to our vast, unbounded true nature—beyond our body, our personal story, and any finite definition we cling to about who we are. Yet the primary method hatha yoga teaches for pursuing this awakening is to become intimate with the heart and blood and guts of our life.

When I step on my yoga mat, I enter a sanctum of marrow and muscle, fluid and nerve. I swim my awareness into hidden chambers of joints, tender organs cradled in cages of bone, the surging channel at the core of the spine. I parse the language of the body in intricate detail: a rotation of the femur in its socket, a lifting of a delicate petal of skin, a drawing downward of one invisible energy to meet the uprising of another in a pearl-sized spot deep behind the whorl of the navel.

I tune my senses to ever more subtle sensations: the way the pressure of the base of my ring finger into the floor rocks my humerus in its cartilaginous nest; the quiescence between an out-breath and an in; the pulsation of prana, the life force that envelops and courses through every living cell. Long-clenched tissues soften, releasing an ever-changing river of memory and emotion. Sometimes what I feel makes me shiver with ecstasy. Sometimes it makes me cry.

By devoting my time and energy to this mapping of my human body—in all of its vulnerability and impermanence—I’m making a statement to myself: This embodied existence matters.

The art of hatha yoga has its roots in tantra—not the popular sexual techniques that spice up modern hot-tub parties and Craigslist personals, but the multidimensional psychospiritual movement that swept through the Indian subcontinent in the second half of the first millennium, and that many scholars believe had roots in much more ancient shamanic practices. Emerging simultaneously in both Hindu and Buddhist schools of yoga, tantra served as a potent counterpose to the ascetic view that had begun to dominate both of those traditions.

The teachings of all the great yogis—including the Buddha—were unified around a common goal: to see reality clearly and thereby arrive at inner freedom. But in their zeal to break free of painful clinging to an impermanent world, many yogic lineages—both Buddhist and Hindu—had calcified around a rejection not just of the body, but of everything associated with it: sexuality, women, family life, the Earth, incarnation itself.

According to one Buddhist text, “This body is a combination of aggregates, elements, and sense-media, which are comparable to murderers, poisonous snakes, and an empty town, respectively. Therefore, you should be revulsed by such a body. You should despair of it.” A Hindu yogic treatise echoed this sentiment: “Venerable, in this ill-smelling, unsubstantial body—which is nothing but a conglomerate of bone, skin, sinew, muscle, marrow, flesh, semen, blood, mucus, tears, rheum, feces, urine, wind, bile, and phlegm—what good is the enjoyment of desires?”

From this perspective, intimate relationships were dangerous not only because they inflamed desire but because they could ensnare the practitioner in family life, leaving no time to meditate. As one Hindu text asks: “How can a person who is attached to family life, with his senses uncontrolled and bound by strong ties of affection, liberate himself?” Or, as Buddhist monks were warned, “It is better that you enter the mouth of a hideous cobra or a pit of blazing coals than enter a woman.”

Like most contemporary yoginis, I’m far from being an ascetic monk. My practice has always been woven into the freeform dance of a modern Western woman’s life: writing, teaching, marrying, divorcing, raising a child. If I look closely, however, I can sometimes see echoes of the ascetic view reverberating in my own practice. It’s there whenever I think that my human body, with all of its yearnings and fears—and by extension, my embodied, relational life in the world—is somehow in the way of my spiritual practice.

I once picked up a book on relationships titled We’d Have a Great Relationship if It Weren’t for You. If I’m not careful, that attitude can creep into my spiritual practice: I’d be a great yogini if it weren’t for that funky vertebra, that bungled romance, that plastic container of furry pasta rotting in the back of the fridge. If I didn’t have to take my son to the orthodontist and empty the compost and get a mammogram and treat the fungus that’s killing my backyard oaks.

That’s the view that tantric practices were designed to shatter. Tantra was a grassroots movement whose earliest adepts were not monks but householders, often from the lowest castes of Indian society—fishermen, wine sellers, washerwomen, and cow herders, people whose days were dipped in the grittiest details of the physical world. To the tantrika, this ever-changing world of ocean, wine, soap suds, and manure was a manifestation of the eternal, formless absolute, and, hence, was not an obstacle to awakening, but a vehicle for it. And so, by extension, was human flesh.

In their celebration of all aspects of birth and death—whether ecstatic or horrific—tantrikas shattered societal convention and ritualized taboos: drinking alcohol, eating meat, having sex unsanctioned by marriage, wandering naked in garbage heaps and charnel grounds. “O friend, understand: the body is like the ocean, rich with hidden treasures,” sang the sixteenth-century Hindu mystic Mirabai. “Open your innermost chamber and light its lamp.” In a similar vein, a Buddhist tantric text instructed, “To renounce the sense objects is to torture oneself by asceticism—don’t do it! When you see form, look! Similarly, listen to sounds, inhale scents, taste delicious flavors, feel textures.”

The Buddhist monk Saraha abandoned his monastic vows and found a woman, an arrow maker, to be his consort and tantric teacher. He advised: “Without meditating, without renouncing the world, stay at home in the company of your mate. Perfect knowledge can only be attained while one is enjoying the pleasures of the senses.”

According to this worldview, women’s bodies were not to be avoided, but to be worshiped, as illustrated by this quote from the seventeenth-century Yoni Tantra, which honors the female reproductive organs: “Meditate as being absorbed in the yoni cakra [chakra],  with yoni on the tongue,  yoni in the mind,  yoni in the ears, and yoni in the eyes. All sadhana is vain unless with the yoni.” (I asked my friend Loriliai Biernacki, a Sanskrit professor at the University of Colorado who has translated numerous tantric texts, if I could call the Yoni Tantra a seventeenth-century version of The Vagina Monologues, but she said that wasn’t exactly an accurate textual representation.)

It was as part of the fertile brew of tantric ideas and practices that hatha yoga emerged—the systematic art of using the body as a tool for liberation. Matsyendra, the semi-legendary founder of hatha yoga, is said to have been swallowed by a giant fish and taken to the bottom of the ocean, where he overheard the god Shiva giving secret yogic teachings to his consort Parvati in their underwater palace. Other stories say that Matsyendra was a disciple of the great Buddhist tantrika Laksminkara, a princess who abandoned her hunter fiancé to live in a cremation ground, clad only in her long black hair.

Hatha yoga shares tantra’s elaborate mapping of the subtle body—an intricate network of energies coursing through channels called nadis and concentrated in swirling vortexes called chakras. The intense physical techniques of hatha yoga, including postures, breathing techniques, and purifications, are a kind of ritual alchemy through which these energies can be harnessed for liberation.

Whether you are standing on your head, pouring salt water into your sinuses, or swallowing a piece of cloth and then hauling it out of your stomach again—you have to perform these physical practices in the service of ultimate spiritual awakening, hatha yogis insist, or your actions are meaningless. At the same time, hatha yoga’s body-based techniques keep the practitioner grounded in the world of physical form—the only place where it is possible to honor the preciousness of human incarnation, with its infinite sorrows and infinite joys.

So every morning I step out under the trees, gaze at the mountain, and open myself to whatever awaits me: fog and sunshine, darting hummingbirds, and dead rats. Like Matsyendra, I am swallowed whole by my practice and drawn to the dark underwater depths, where—if I listen carefully—I can hear the whispered secrets of the gods.

Last month, a high wind blew my sheltering oak down—shattering part of my deck, knocking down a bay tree, uprooting my garden steps. It missed my house by less than a foot, falling instead directly on top of the statue of Prajnaparamita, who peered out unscathed from between its roots. Without the oak’s shade, it’s hotter on my deck in the morning and not so comfortable. But I practice there anyway, in the bright blast of sun.

I know I’ll blow down myself one day. My body will be torn apart and eaten by the feline-sharp teeth of time. But until I do, I’ll go on reaching my branches to the sky each day and sinking my roots deep into the earth. I’ll go on cherishing this fragile, impermanent union of spirit and bone.