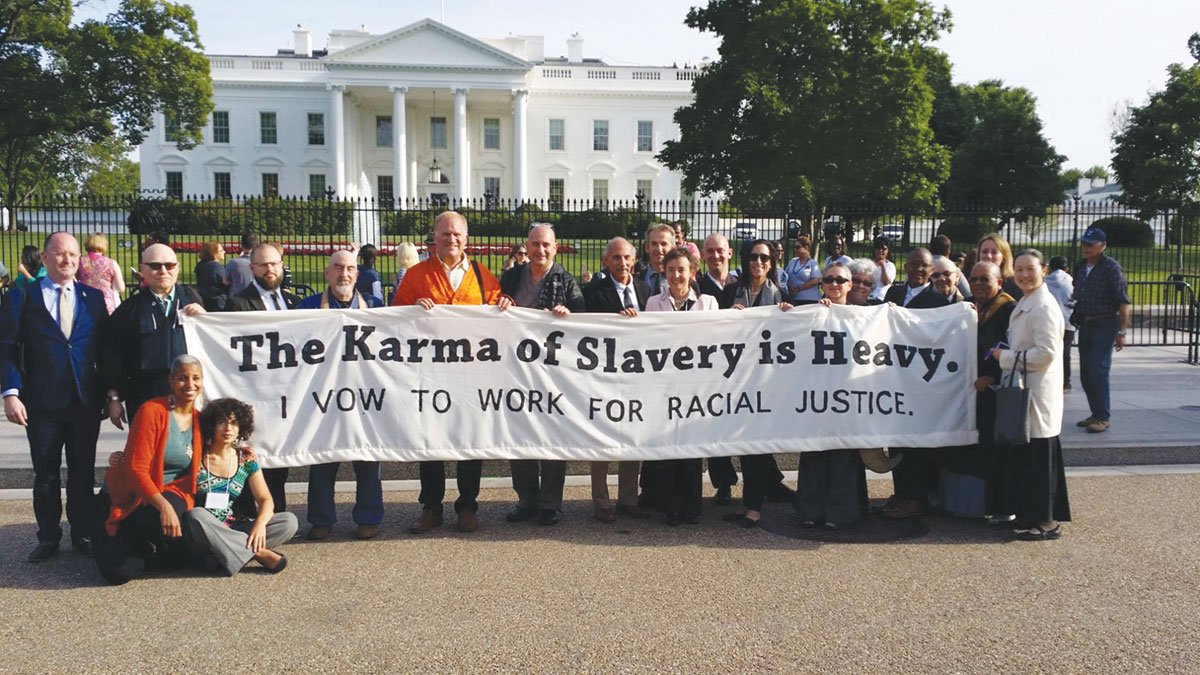 Buddhist leaders gather outside the White House following their 2015 meeting with members of the Obama administration. Photo courtesy of Buddhist Peace Fellowship.

“The Lotus Sutra states, “[The doctrines that they preach…] will never be contrary to the true reality.” T’ien-t’ai commented on this, saying that ‘no worldly affairs of life or work are ever contrary to the true reality.’ A person of wisdom is not one who practices Buddhism apart from worldly affairs but, rather, one who thoroughly understands the principles by which the world is governed…”

These are the words of Nichiren, one of the great teachers in the Lotus Sutra lineage. At the core of his actions in tumultuous thirteenth-century Japan was the conviction that Buddhism could and should improve the day-to-day lives of the people, just as a skilled physician should be able to cure the sick. I think this passage captures his conviction well and has been both an inspiration and a challenge to me for many years.

I carried it with me as I helped organize a day-long conference at the White House in May, 2015. It was the first of its kind, in which 130 leaders and scholars from all corners of the U.S. Buddhist community met with senior officials of the Obama administration to press them on the topics of climate change, racism, economic injustice, and the plight of Rohingya refugees.

Five years later, these same issues persist, along with a number of new and pressing concerns. They compete for our attention, fear, and outrage, as well as for our courage, wisdom, and compassion. Let us persist as well.

While I am still working on becoming the “person of wisdom” that Nichiren describes, my years of Buddhist practice in Soka Gakkai International and my work at the intersection of religion and public affairs have convinced me of the following “truths.”

1. Each of us shares a profound karmic bond with this time, this land, these people, and these politics.

2. We should stand before these sufferings reflecting not only on the poisons of greed, anger, and ignorance that got us here, but also calling forth the Buddha’s virtues of true self, eternity, purity, and happiness that we pray will lead us forward.

3. Don’t be swayed by momentary results. Meaningful change takes time and generally requires a number of false starts. One of the ten titles of the Buddha is “One Who Can Endure.”

4. It’s not a choice between internal transformation and social reform. The two can and should go hand-in-hand. Awakening to our interconnected reality will hopefully lead us to give of our time and energy to improve the well-being of our shared community and planet. Likewise, the marathon of an engaged life requires that we nurture and expand our inner life through our practice of the buddhadharma.

5. Electoral politics is not the only way to change the world. Engaging with our elected officials is good, and so is working for an issue or candidate that you believe will be helpful. But so is caring for family members, visiting and encouraging the sick, or making the time to listen to someone in need. There are as many avenues for action as there are areas of suffering.

That said, the worlds of politics and governance impact so many lives, either for good or for ill, that we need to pay particular attention to them. And if we are fortunate enough to live in a (more-or-less) democratic society, we need to protect those institutions and the people that support it.

Finally, I believe that our obligation to each other is to keep working toward a world that expresses the very best (or at least the somewhat better) of us. In the end, isn’t this what bodhisattvas do?

Bill Aiken is a member of Soka Gakkai International–USA and served as its director of public affairs from 1998 to 2016. He currently serves as board president of the Interfaith Council of Metropolitan Washington.