In this conversation featured in Lama Rod Owens’ new book Love and Rage, he and Buddhist teacher Kate Johnson discuss how the dharma can help us hold our anger and work with our rage. 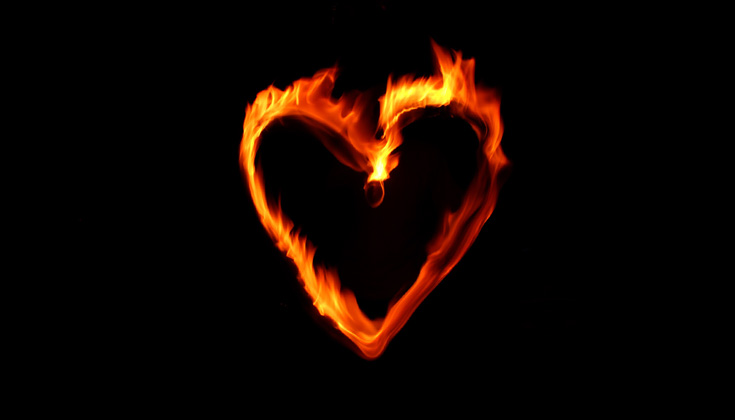 This conversation is from the series “U Mad?” hosted by the Buddhist Peace Fellowship.

Kate Johnson: I am just really excited to talk to you about this topic of love and rage and accessing the wisdom that’s available in the dharma for working with our own rage, for working with rage that we experience coming from outside sometimes directed at us, and certainly in this turbulent political time it feels like a prescient topic. To start, I know you hold a dual role in your community as a dharma teacher and as well as an activist, and someone who spends a lot of time in politically active communities, and so I’m wondering for you—how do you hold the role of anger? And is it different for you in moving in these two communities? Is there something you bring from one to inform the other? How does that work for you?

I was really working with not performing anger, because I needed to stay alive.

Lama Rod Owens: I would say anger was really the first material I had to work with, that began my practice. Actually, there were senior practitioners that I was around who were coming to me initially, before I really had a practice. They were coming to me saying, “Rod, I think you have a problem with anger.” I couldn’t see it; it was so normalized for me. People would come and sit me down, and they would be like, This is what I’m seeing. I would be like, Fuck you, and I couldn’t see that reaction as an expression of anger.

KJ: That reaction to being told you were angry.

LRO: Yeah, it was so ingrained, like anger was so much a part of my life, and I was heavily in activism so it was really fueling something for me. But as I moved out of my early twenties, I began to see what people were talking about, and for me, clinical severe depression was really the first time that I began to understand the impact of anger in my experience.

KJ: What was the relationship between the anger and the depression?

LRO: What I began to see was that anger was deeply turned around, like I wasn’t acting angry. I had redirected it, and deeply internalized it. That began this process that led into depression for me, and I think that I was so hesitant to externalize anger because externalizing anger as a Black man was dangerous.

KJ: Yeah, when you said that about teachers coming to you and saying, “I see your anger,” it’s such a sensitive place because.… My experience as a Black woman is that often I’ll be expressing some other kind of emotion like excitement or sadness or fear, and people will say, Oh, you’re angry, you’re angry; and that can be so hurtful. So it’s been hard to work with my own anger just because I am so busy trying to convince other people that I’m not angry when I’m not angry, that when I am actually angry it’s like, oh no, this is exactly what other people are scared of.

LRO: Exactly. I think as Black-bodied people we are moving in the world in a hypersensitive way, and we know the consequences of being angry outwardly, and we know how we can be policed, and that policing actually puts our life in danger. So I was really working with that kind of etiquette of not performing anger, because I needed to stay alive. And then in my interactions with people, it’s really easy in my situation to get this label of being a nice Black man, and that completely erases my validity as someone who experiences anger because of injustice and who is actually deeply responding to something that is putting me at risk. And when I do express anger, I get tone policed.

LRO: People will say, “I don’t like your tone.” Well, my tone is not the point.

KJ: Right, right. Well, I won’t talk to you until you calm down, you know?

LRO: And again, that triggers that anger for me. Where I’m like, I don’t care what you’re thinking, I’m still gonna be communicating with you. So it doesn’t matter if you’re shutting down or walking away; I will be walking with you.

KJ: Right [laughing]. I will be by your side, communicating.

LRO: Right. And that’s what happens for me and my practice. I actually had to let go of being affected by those strategies. So if someone says, “Well, I don’t like your tone. I think you’re angry. I can’t listen to it,” I say, “Oh well then. That’s where you’re at.” That’s not gonna affect me, because I’m actually trying to hold space for my experience. I know that in the past I have privileged the ways other people have censored me, and that’s actually been a cause of the ways in which I’ve suffered.

Anger is actually pointing to a really real kind of woundedness.

In my dharma training and in retreat, what I began to see was that my anger was valid, and that it was trying to teach me. In dharma communities where we’re taught that we just need to suppress our anger and that anger is wrong, that there’s no place for anger in our dharma spaces. And that’s just another strategy that these spaces are using to control bodies, to police bodies. You know? Because our anger, especially if we’re in dharma spaces, our anger is actually helping us to look at things that feel really off. I’m just not angry for the hell of it.

KJ: Right, or ’cause it’s fun or ’cause I have a problem.

LRO: Yeah, it’s not cool to be angry, you know? It’s not like what the kids are doing these days, you know? But anger is actually pointing to a really real kind of woundedness, of hurt.

KJ: I think it would be beautiful if in our dharma spaces or in our activist spaces or just with our friends we could have that kind of agreement not to problematize the anger but to have a commitment to look at what the anger is pointing to. To be able to mine that experience for the information that’s available.

LRO: It’s okay to be angry. It’s okay to have this experience of being pissed off right now. And I’m not gonna hide out from it, I’m not gonna push it away; I’m gonna hold it and take care of it. Even if it’s not legitimate—maybe it’s coming from the ego fixation, which anger is—but I’m still going to allow space for it to be there. 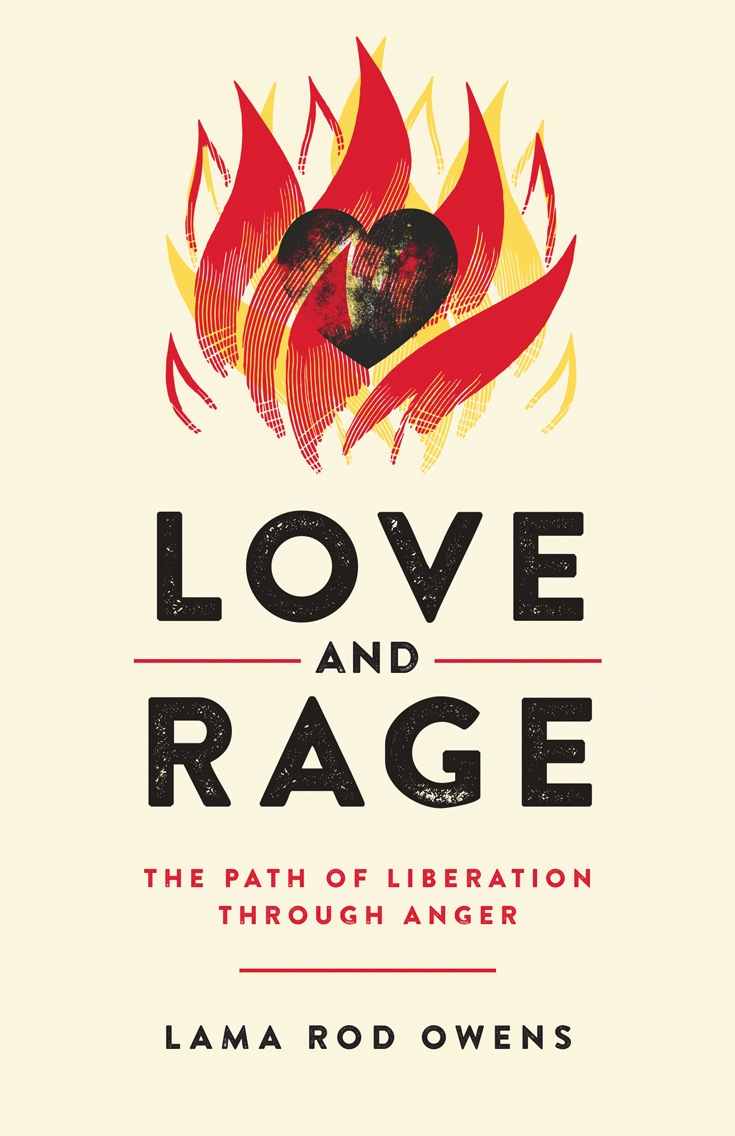 KJ: Making space to have that experience of anger: is that how you do it? You just say, “It’s okay that I’m angry right now”?

LRO: Yeah. It’s okay, because I’m trying to allow there to be space for me to notice it. Because if I don’t see it, if I don’t notice it, then I start reacting to it subconsciously, and that’s where harming begins for myself and for others, and in relationship too. Now having said that, yes, I am angry and I’m actually communicating out of this anger. This is where mindfulness and awareness come into play. So I have practiced in a way that I can actually communicate while being angry. It’s a slippery slope.

KJ: Well, it’s a skill, because often when I’m angry, I’ll feel it kinda rising up from my belly like up to my throat, and there’s so much force there that I don’t necessarily know what’s gonna come out. And it depends on if I’m in a safe space, and it’s okay not to know; but as you mentioned, we can be in different spaces of high risk involved with expressing anger depending on how we present in the world.

LRO: I think it was Suzuki Roshi who wrote in Zen Mind, Beginner’s Mind—to “give your sheep a lot of pasture”—and I’ve been working with that for years, for years, early on. And that’s the way that I approach my anger when I am having to interact with others in tough spaces. I give that anger a whole lot of room; I give it a lot of room to roam and to be there. But I still need to do what I need to do in the situation. I can only do this because of having to make anger my primary project in my practice.

From Love and Rage by Lama Rod Owens, published by North Atlantic Books, copyright © 2020. Reprinted by permission of publisher.

Kate Johnson is an acclaimed teacher, writer, and facilitator. She leads programs and retreats integrating meditation, somatics, social justice and creativity around the world. Kate works with individuals and organizations seeking greater sustainability through the cultivation of wise relationships. www.katejohnson.com