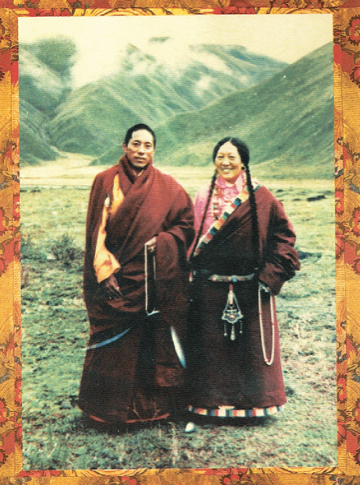 Within Tibetan Buddhism, much has been written about the consorts of great lamas—their remarkable lives, and also their role in helping the dharma to flourish through assisting male partners achieve spiritual realization. Many scholars have easily critiqued the tradition of sangyum (“secret consort,” an honorific term for wife or long-term partner of a spiritual master), pointing out the obvious sexism in determining a woman’s value from her sexuality and caretaking role rather than her own qualities. Holly Gayley’s Inseparable Across Lifetimes is not this kind of story.

Gayley introduces readers to an extraordinary woman and to a couple deeply in love, not just with the dharma but with each other. Their love and devotion was not a distraction from their life’s purpose; rather, it became the substance and fuel of their bodhisattva vows to work for the benefit of sentient beings. Khandro Tare Lhamo (1938–2003) was considered the rebirth of two important figures from Golok: one male, Tra Gelong (1866–1937), and Sera Khandro (1892–1940), a female terton, or “treasure-revealer.” On these grounds, combined with astonishing spiritual power, she was bestowed numerous transmissions. Namtrul Rinpoche (1944–2011) was descended from the royal line of Mukpo Dong and, as did Tare Lhamo, had a series of miracles attributed to him from the time of his birth. Namtrul Rinpoche was recognized as the fourth Namkhai Nyingpo emanation of Zhuchen and began revealing treasures in his youth. At age nine he prophesied his mother would soon die and was said to transmit phowa instruction to her corpse. He received visions that he would one day meet a partner who was an emanation of Yeshe Tsogyal. When the two finally met in 1979—after a year of a secret messenger bringing letters back and forth, two days on horseback—other great masters in the region shared in this prophecy, confirming that Tare Lhamo and Namtrul Rinpoche were mutually destined for one another.

They were both recognized as tertons in Eastern Tibet, making them a power couple of sorts. But more fascinating is how, through their love and affection for one another, they revealed treasure teachings together, in tandem. Their role as treasure-revealers who needed to join together was prophesied by Tare Lhamo herself—in her first letter to the man who would become her beloved, she told him as much, declaring that their partnership would play a role in restoring Buddhist teachings throughout the region. Her prophecy was realized.

Gayley translates, for the first time into English, forty-two out of fifty-six love letters. Readers seeking more analysis of the religious and literary significance of the couple’s work can also see Gayley’s longer monograph, Love Letters from Golok: A Tantric Couple in Modern Tibet, as well as their respective namthar (spiritual biography or hagiography)—Jewel Garland: The Liberation of Namtrul Jigme Phuntsok and Spiraling Vine of Faith: The Liberation of Khandro Tare Lhamo. In Inseparable Across Lifetimes, Gayley presents translations of the original letters and commentary to contextualize the significance of their writings, as well as biographical accounts of their lives, teachings, and shared time together.

The love letters are nothing short of remarkable. Writing in a traditional Tibetan style of ornate poetry and folk songs, Tare Lhamo and Namtrul Rinpoche share recollections of past lives together while falling in love on the page. The letters contain prophecies regarding locations of treasures in the landscape they would eventually find together to help the dharma flourish. In this way, the couple comes to contextualize their partnership as part of a samaya vow, one sealed by Padmasambhava himself in the eighth century during their previous lives as the close disciples Atsara Sale and Shelkar Dorje Tso, or alternatively as Namkhai Nyingpo and Yeshe Tsogyal. Khenpo Jigme Phuntsok, the great Buddhist master and emanation of Mipham Rinpoche who founded Larung Gar, drawing nearly ten thousand students to join him in revitalizing the dharma after the Cultural Revolution, recognized each of them as tertons; he seemed to confirm not just their qualities as individuals but the importance of their union as treasure-revealers in consort.

There have been a great many Nyingma lamas with honored and revered sangyum, often called khando (dakini); however, Gayley argues that the partnership between Namtrul Rinpoche and Tare Lhamo was distinct. She points out that Indian tantric literature “tends to portray the ideal partner for tantric sexual practices as the parakiya, or ‘one who belongs to another.’ Reinforcing this, the songs of the Indian siddhas (‘accomplished ones’) tend to portray illicit trysts with low-caste women in the role of consort.” In part, this is because the danger of romantic love—namely attachment—was viewed as antithetical to progressing on the spiritual path. Yet Tare Lhamo and Namtrul Rinpoche do not deny romantic love; they go straight into it, using what is usually seen as a danger to purify contaminated view. Their revelations have been gathered together into a twelve-volume corpus in which they take turns revealing and decoding treasures as partners, helping to decipher dakini script, and completing one another’s visions.

The correspondence begins in 1978; Namtrul Rinpoche traveled the next year to Markhok to visit Tare Lhamo and meet her relatives. She left her homeland in 1980, and the couple immediately began work to rebuild Nyenlung, a monastery in Serta. This period following the Cultural Revolution, which had brought the destruction of thousands of monasteries and temples as well as the loss of great teachers, was marked by sweeping revitalization across the Tibetan plateau. Namtrul Rinpoche had himself been imprisoned, and locals recounted many stories of how both of them (long before they met) inspired others to resist killing animals in work camps and offered dharma teachings and rituals in dangerous political contexts. In their letters, they yearn to be together, to join in great bliss, not for their own mere pleasure but for the protection and revitalization of the dharma.

The letters were batched into two collections: his letters to her in Adamantine Garland and hers to him in Garland of Lotuses. As Gayley articulates, the very first letter Tare Lhamo sends foreshadows the tone of much of their life together. In it she “demonstrates her knowledge of esoteric Nyingma teachings in a style that is reminiscent of a song of experience, relaying the results of meditative experience; the second half of the letter contains a prophecy about a treasure revelation awaiting them” at a well-known Nyingma pilgrimage site in Amdo:

To the tulku of Namkhai Nyingpo,
Free from extremes, removed from worldly concerns,
In the dream of dependently arisen phenomena,
There is nothing for the mind to gauge.
In alpha-pure naked awareness–emptiness,
No distortions from thoughts, good or bad, remain.
While unobstructed experience, the cognizing aspect,
Flashes forth as the five lights manifesting wisdom,
Free from extremes of permanence or absence,
The sun of awareness, the definitive meaning, arises,
Recognizing the nature of awareness as clear light,
Just that is nonconceptual wisdom.

Through the power of our aspirations,
If coincidence makes it possible to meet,
In the powerful Monkey Year,
At the eastern Turquoise Peak’s lakeshore,
Sacred site of the Eight Command Sadhana,
If we are able to make aspirations together,
We will awaken the entrustment as a couple.
If we reach ten million feast offerings—
The material arrangement of five gems
Along with superior gold, silver, copper, and iron—
It is our fortune for circumstances to converge.

At the meditation site of White Cliff Monkey Fortress
Are yellow scrolls of the one hundred thousand dakinis.

Namtrul Rinpoche responds beginning with elongated praise for Tare Lhamo as an emanation of Yeshe Tsogyal. As Gayley recounts, he implores her to keep sending letters and prays for her “long life in language reminiscent of a longevity chant to a Buddhist teacher: ‘May your lotus feet remain on a vajra throne.’ Along the way,” she adds, “he makes an artful innuendo with respect to their future consort relationship, by referring to her as ‘the lady of bliss–emptiness’ who is skilled in conjuring the ‘sport of attraction’ and guiding to ‘the wisdom expanse of the four joys.’ The four joys are engendered through the tantric rite of sexual union and provide access to a state of nondual bliss and the deep reaches of the mind where treasures are said to be hidden.” The letters unfold with an erotic dance of courtship through sexual imagery of tantric union: “sip the elixir together,” “the delight of the daki’s body,” “inciting complete blissful joy through great passion.” In another early letter, Tare Lhamo depicts herself as a tigress (her birth year) circling a monkey (his birth year) in seductive dance. This is a woman with power, desire, accomplishment, and prowess.

Intriguingly, Gayley asserts that the couple strives for a love that is ferocious yet without attachment, a seeming contradiction for those mired in samsara. For example, in another early letter, Tare Lhamo sets the record straight, telling Namtrul Rinpoche that in her quest for their union, she “rejects self-centered motivations, such as the need for material support, feelings of loneliness, attachment to worldly concerns and activities, or the confusion of negative emotions,” and is instead bound by a pure prophecy of Padmasambhava. At the same time, passion is not rejected, as a celibate monastic would do, but embraced in pursuit of the “four joys,” which are “conducive to realization and also, for those duly appointed Tibetan visionaries, [to] treasure revelation.” Like ordinary couples deeply in love, Tare Lhamo longs for her beloved a hundred times a day. Yet this union is meant to reveal treasures for the benefit of all beings:

One hundred times a day,
I recall the spiritual support;
My congenial friend comes to mind.
The sketch of past lives becomes clearer;
Mind yearning, my fondness increases.

“Separation” is like the heart being ripped out.
Ah! It is just so. But there is no need to be sad.
Hold in your heart the oath of the mother dakinis.
We must respect the Lord Padma’s command.

May the sublime three jewels and guardians bless the congenial friend so that our wishes may be fulfilled.

Here, readers can see how it is that Gayley reads passion and longing in these letters, as well as spiritually oriented union in the couple’s relationship.

The union is also seen as a protection of the dharma in a dangerous time. As Namtrul Rinpoche writes:

E ma! The profound extract
Of the lord of victors, Padmakara,
Is the sublime heart essence of dakinis,
The wish-fulfilling jewel that heals
Damage to the teachings and beings.

Despite the great difficulty in traveling across province borders, the notion of “damage to the teachings” (from the Cultural Revolution) is immediately evoked as great motivation for their joint efforts as tertons.

Readers will no doubt delight in this living treasure of love, liberation, and protection. Whereas many stories of great teachers and their revelations come from afar—both geographically and temporally—Inseparable Across Lifetimes has a feeling of deep closeness. Perhaps it’s because Namtrul Rinpoche and Tare Lhamo were alive during our own lifetime, or perhaps because we have all loved, and indeed, live for love. There is a decided feeling of closeness, care, and devotion in this wondrous tale—a taste of bliss.

Sara Lewis brings her training as both a psychotherapist and an anthropologist of religion and medicine to Naropa University, where she teaches contemplative psychotherapy and Buddhist psychology. Her work (including her book Spacious Minds: Trauma and Resilience in Tibetan Buddhism, which will be published next year), explores “how individuals and communities cope with the vicissitudes of life — not in spite of suffering, but through it, and because of it.”