Carolyn Rose Gimian reflects on modern-day practitioners’ ambivalent commitment to the three jewels and considers what we might be losing out on. 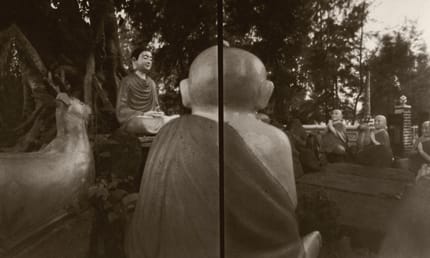 It struck me recently that something is happening in the West with the three jewels of the Buddha, dharma, and sangha that may never have happened before. It is possible for a contemporary practitioner to have allegiance to only one of these gems, the dharma itself. Many practitioners of mindfulness meditation in North America do not think of themselves as Buddhists, nor do they see the practice of meditation in connection with religion at all. Many unaffiliated Buddhists do not associate meditation with a relationship to a teacher, a tradition, or a particular community of practice. You can learn mindfulness meditation from books, DVDs, television programs, and the internet. Even in situations where you receive personal instruction from a teacher, you might regard learning to meditate like learning to drive or play tennis. There is no committed teacher–student relationship implied. No particular loyalty to a teacher or to a set of dharma teachings is necessarily required.

Within Buddhism as it developed in Asia, there were many different approaches to working with a teacher. The teacher might be an elder, a spiritual friend, or the more severe vajra master, as in the Vajrayana tradition. How will the teacher–student relationship evolve in North America? We are used to a great deal of personal freedom, so we may feel that we can choose exactly the kind of relationship we want to have with a teacher. But the role of the teacher has not traditionally been based on personal choice, although individual factors have always played a part. In many cases the choice of a teacher was related to where you lived or what community you were part of, as well as the judgment of teachers in that community regarding how much you could handle or what was appropriate for you. These are still key things to consider before committing to a teacher and a practice community.

As practitioners coming to terms with the role of a teacher, we have ingrained views of authority and hierarchy that come into play. Some people, for example, worry that spiritual commitment to a teacher will lead to a relationship in which inappropriate power is given to one person over another, which surely can happen. For some, this may become a reason not to have a teacher at all. People may feel that, like the Buddha, they can figure it out for themselves.

In other areas of our culture, such as art, writing, or even cooking, we accept the need to have a demanding mentor. If you want to become a chef in New York, you are probably going to have to submit to a rigorous training in the kitchen of a dictator. And chances are, you’ll eat it up, so to speak, if this is really your path. (See Bill Buford’s book Heat.) In the West, we understand an intensely personal apprenticeship as part of the necessary discipline of learning an art or a craft, but we are very suspicious when it relates to religion.

The other side of the same coin is naively embracing the belief that having a teacher means happily surrendering one’s doubt. This mentality, when taken to its extreme, has led to cults in the West, but it can also come into play in many legitimate communities. It sometimes results in intolerance toward anyone who holds a minority view within a sangha, someone who doesn’t go along with the dominant culture or mystique. This is a place where attitudes about the teacher bleed over into the attitudes within the sangha as a whole. This state of mind, in which one feels that people should be either “in” or “out” with no gray areas, is destructive to developing greater personal openness and a bigger view within one’s own practice.

Puritanical views of discipline and conduct also seem to arise in the sangha from the same substratum. It’s not that unethical behavior is okay. Rather, it’s how we look at and express morality and how we work with problems in ourselves and others. Ostracizing or shunning someone in the sangha because, for example, they drink or smoke or (insert vice here) does not seem like particularly Buddhist behavior.

With all of these changes and intricacies in Western Buddhism, the role and meaning of sangha is being redefined. The Western secular or lay sangha that is the most familiar model for Western practitioners is quite distinct from the traditional view of the sangha as the ordained community of monks and nuns. But in some respects, the distinction between monastic and lay disciplines may not be as great as it seems at first glance. While I have great respect for those who become monastics, I would venture that there are myriad interpersonal difficulties and politics at play in monasteries and nunneries, in Asia as well as the West.

For all of us striving to be a community of Buddhist practitioners, how do we live up to the definition of the sangha as one of the three jewels? Seeing the Buddhist community as a jewel may be a particularly difficult task for Western Buddhists. Do we really think of our relationships with other practitioners as a source of sanity? They may be a source of dependency or of alienation, but a source of wisdom?

On a mundane but helpful level, we see ourselves and our dilemmas reflected in other members of the sangha, which can be immensely helpful and sometimes provide inspiration and solutions. We see the mistakes we make, and that others are as human as we are. We may be humbled to see that our realizations are no greater nor more profound and unique than those of our peers.

For me, traveling to India for the first time in 2010 was an eye-opener in terms of appreciating the three jewels and particularly the value of the sangha. Like so many Buddhists from around the world, a major focus of our family’s trip was pilgrimage. We visited a number of the sites connected with Shakyamuni Buddha, including Bodhgaya, where he attained enlightenment.

There was a palpable feeling of immense space and peace at Bodhgaya. Being a rationally minded Westerner, I was quite stunned by it. My sense of connection to the historical Buddha grew immeasurably, as well as an appreciation for the quality of wakefulness. Feeling the power of this place was beyond my conceptual framework. This experience of atmospheric wisdom emanating from ancient ruins happened at a number of sites in India.

Seeing so many empty ruins in India also heightened for me the reality that Buddhism had virtually died out there for centuries. I had known this before intellectually, but it was viscerally shocking to realize that such a powerful place as Bodhgaya had gone to ruin with no community to maintain or protect it for hundreds of years. Stones removed from the Mahabodhi Temple had been used as cobblestones in nearby communities. It was European gentlemen explorers, largely, who rediscovered the significance of the site, with the help of the writings of a Chinese mendicant monk and other early accounts of travels in India.

Even today, there are relatively few Indian Buddhists in India. It struck me that without people to practice the teachings, a place like Bodhgaya becomes empty of meaning. It’s a bit like asking whether a tree that falls in the forest makes a sound if there’s no one there to hear it. How can the power of the place be felt without a sangha to feel it? More significantly, the Buddhist teachings themselves would be lost without people practicing and studying them. The great practice traditions were kept alive and deepened in Southeast Asia, China, Japan, and Tibet. It’s really only in the last hundred years that the teachings have begun to come home to India, being disseminated again to an Indian Buddhist community.

In contemplating this, I turned to a sutra that Chögyam Trungpa Rinpoche introduced as a chant in connection with monastic eating, or oryoki. The Sutra of the Recollection of the Noble Three Jewels offers this description of the sangha:

This view may seem contrary to how we often experience sanghahood in the West. One is tempted to think of another sutra for the twenty-first century, such as: “The sangha is a source of aggravation; it is a complete source of great aggravation.” However, I’ve begun to see my irritation as just the other side of the coin of appreciating the sangha as a whole. The enlightened qualities of the sangha mentioned in this sutra might be seen, not as a contrast to the modern sangha or criticism of it, but as an aspiration.

In that light, “entering completely” can relate to dedication, not giving up on the practice or the community, whatever its ups and downs. Perhaps we are rarely “insightful, straightforward, and harmonious,” but we aspire to these qualities. The sangha may not always be harmonious but we are dedicated to finding harmony. Because the sangha practices and studies the dharma, it is worthy of veneration. Because the sangha is not just worthwhile but essential to the survival of the buddhadharma, it is worthy of receiving prostration. Being a field of glorious merit acknowledges the power and the duty that the sangha has to keep the dharma alive. At the same time, we shouldn’t take our virtue for granted. This is the basis of being completely capable of receiving all gifts, which is in fact a responsibility, not a right. The sangha should behave in such a way that it is worthy of being supported, by demonstrating sanity, generosity, and all the virtues of a bodhisattva. Then we will be an object of generosity, a great object of complete generosity.

As Buddhist practitioners, we all have the burden of protecting and shepherding the three jewels. We are one of them. And without our efforts and those of future generations, these jewels could be tarnished and lost. I think there is not a single practitioner who does not feel tremendous gratitude for having encountered the dharma in this life. We all have a sense of the great debt that we owe to the Buddha, both the historical Buddha and our personal teachers, and to the dharma and our fellow practitioners. In that spirit, let us venerate the three jewels.

Carolyn Rose Gimian is a meditation teacher trained by Chogyam Trungpa. She is the editor of Smile at Fear: Awakening the True Heart of Bravery, and other teachings by Chogyam Trungpa, including his collected works.