A new organization called Buddhist Insights is helping New Yorkers meditate in all manner of surprising places — and to make friends with their surroundings. And they’re garnering attention, too. 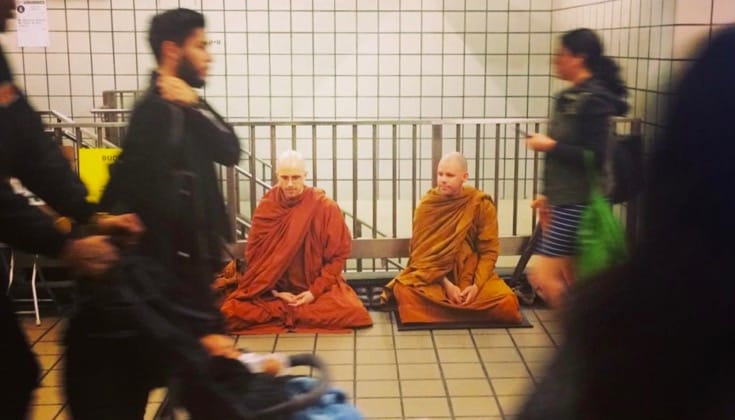 New Yorkers may not think of the city’s gritty streets as a place to find inner peace, but a new group called Buddhist Insights is aiming to change that.

“There’s this idea that you have to escape New York to find peace and quiet,” explains Buddhist Insights co-founder Giovanna Maselli. To challenge that idea, she and her co-founder, Buddhist monk Bhante Suddhaso, hold meditation classes in unconventional locations around the city. They call them “street retreats.”

“The street retreats started as a fun thing to do,” explains Maselli. “But they got a lot of positive feedback. People realized that they could meditate anywhere.” 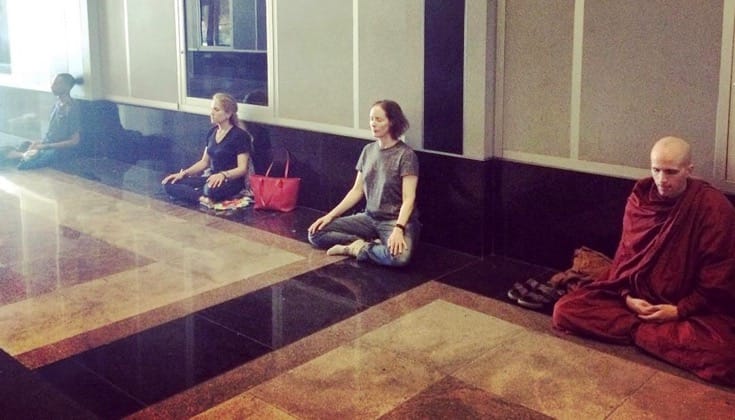 A Buddhist Insights class in a building lobby.

Buddhist Insight’s mission is to connect New Yorkers to Buddhist monastics. Maselli explains that when she was trying to find a monastic teacher in 2015, she came up empty. So she collaborated with Suddhaso, a monk in the Thai Forest Tradition of Theravada Buddhism, to start the organization. He and Maselli, who has a background in creative consulting, almost accidentally invented their concept of hosting meditation classes in the street.

“It all started because I tend to be late,” says Maselli. “Whenever we met, I would find him waiting for me in meditation, so I started taking pictures of him.” 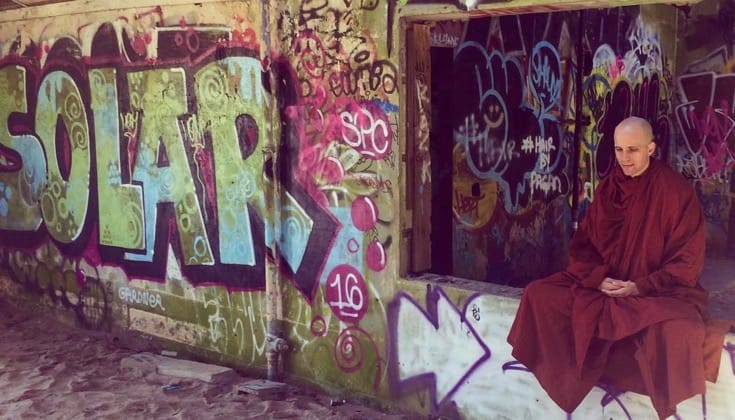 Maselli posted those photos to Instagram, where each one garnered hundreds of likes. After less than a year, the Buddhist Insights account has more than 20,000 followers. When Buddhist Insights held its first class in January, promoting it on Instagram, fifty people showed up and another fifty put their names on the waiting list.

In lieu of a dedicated space for their meditation classes, Maselli and Suddhaso started hosting weekly classes in the wilderness of New York City: churches, art galleries, beaches, sidewalks, subway stations, parks, and anywhere else they could freely sit. 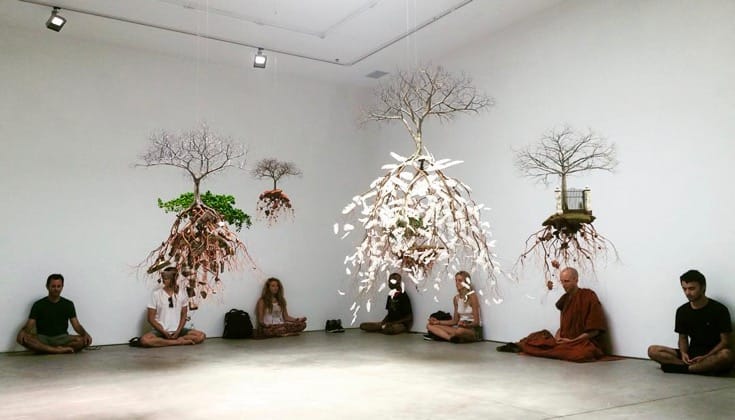 A Buddhist Insights class in an art gallery.

“It’s about establishing the attitude of meditating anywhere and making friends with your environment,” explains Suddhaso. “Often, when we’re meditating and there’s noise outside, we think, ‘Oh, I could meditate if not for that noise.’ The problem isn’t the noise. What’s disturbing your meditation is your attitude toward the noise. The noise is just noise. So, we’re establishing the attitude of focusing on the present moment and using it as your laboratory for investigating the mind. That’s something you can do anywhere, with any conditions.” 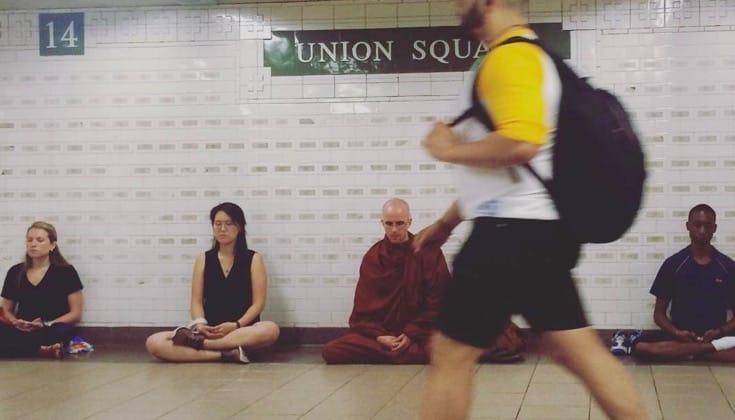 Weekly classes often take place on the beach or the sidewalk, but some programs have gotten very creative. In June, Buddhist Insights hosted contemplation-of-death meditation in a cemetery. In September, they held a retreat in a chocolate factory. “When we talk about renunciation, it’s abstract,” explains Maselli. “When you bring it to a place where you can taste the chocolate, it has a different impact.”

In October, they hosted a day-long retreat of loving-kindness meditation on the subway, encouraging attendees to practice loving-kindness for the commuters sitting around them.

Inadvertently, the meditation sessions also serve as a welcome counterpoint to the growing problem of fake Buddhist monks aggressively panhandling in Times Square, along with many other cities around the world.

The “street retreat” isn’t an entirely new idea. Zen teacher Bernie Glassman and the Zen Peacemakers order have been hosting “street retreats” for decades, spending days and nights living on the streets of New York. Buddhist Insight’s retreats are different in that they are short, and anyone — beginner or advanced — can attend.

The group also hosts more conventional programs and hopes to offer even more. Last month, Buddhist Insights launched an online fundraiser to open a meditation and retreat center in Queens. Suddhaso and Maselli say they’ve discovered a significant appetite for Buddhist monastic teachings in New York — something that no one else in the city is offering. 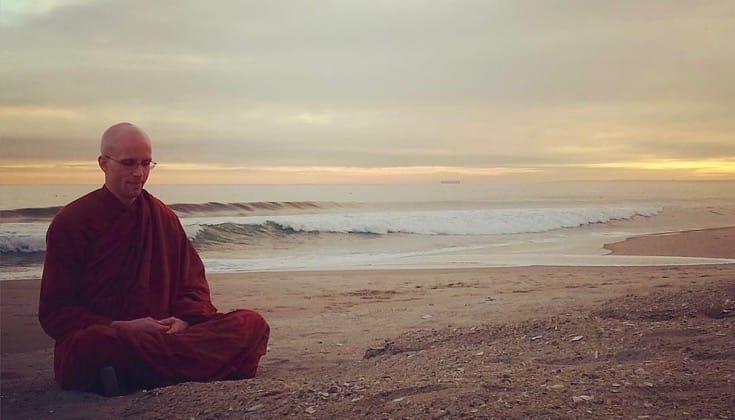 Suddhaso meditating on Rockaway beach in the winter.

Suddhaso says that he thinks the appetite comes from people wanting to move beyond secular practices like mindfulness meditation to find more profound meaning.

“When it comes to that more profound level, it’s useful to connect with people who have devoted their lives to these teachings, which is why we bring in monks and nuns who have often been practicing for decades,” he says. “They’ve committed their lives to embodying the Buddha’s teachings. That’s something people recognize as genuine and valuable.” 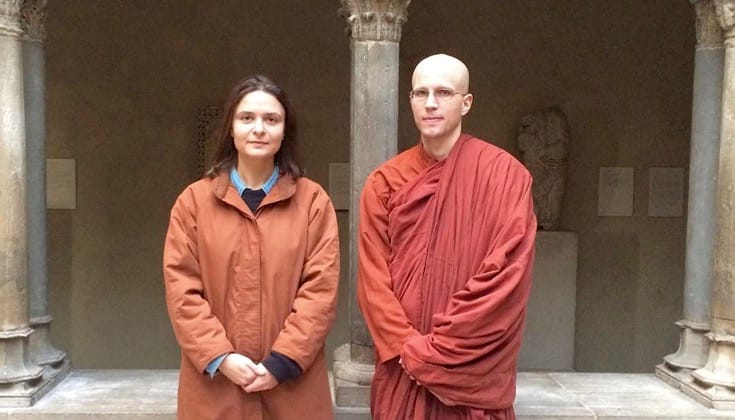 Classes and retreats at Buddhist insights are led by Suddhaso or monastics visiting from other centers in the Theravada, Vajrayana, or Zen traditions. Programs are offered free of charge, with donations welcomed.