Tulku Urgyen Rinpoche (1920–1996) on the differences between Mahamudra and Dzogchen — and the relationship between them. 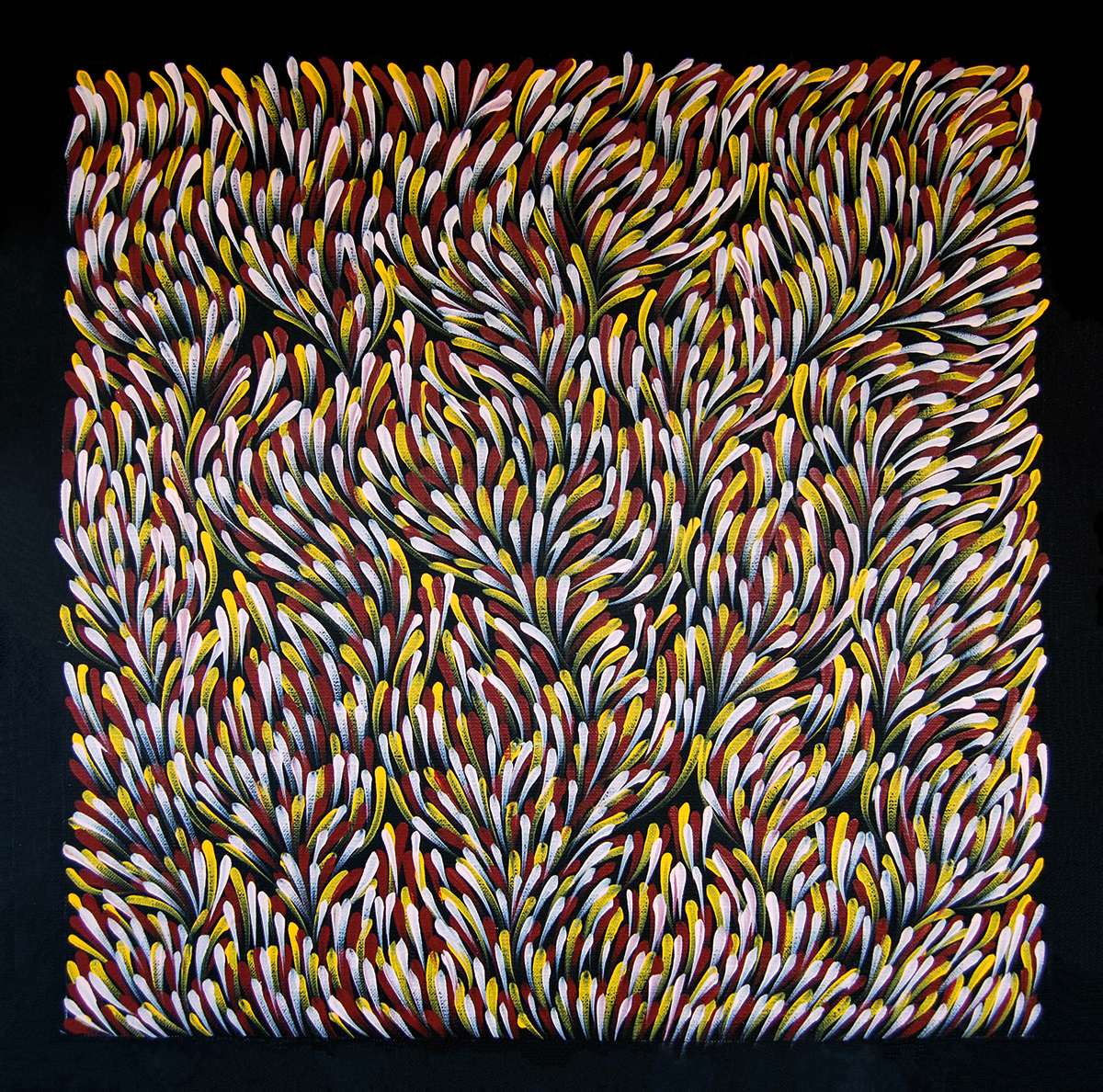 In Mahamudra, you are introduced to mind and then you train with awareness. The practice is mixed with mind until reaching nonmeditation. Then the practice is only rigpa, the ultimate view. In one-pointedness and simplicity, you exert lots of mental effort, through which fixation greatly reduces and obscurations are cast away. It is like peeling off different layers of corn; first one is peeled, then the next and the next. In Dzogchen, from the very beginning you are introduced to nonmeditation, nondistraction.

According to the words of Künkhyen Tsele Rinpoche, also called Tsele Natsok Rangdröl:

Mahamudra and Dzogchen
differ in words but not in meaning.
The only difference is that Mahamudra stresses mindfulness
while Dzogchen relaxes within awareness.

[In Mahamudra] you then train with appearances by utilizing whichever of the six sense perceptions that occurs, without keeping or discarding. —Tsele Natsok Rangdröl

In Dzogchen you “train with awareness” and in Mahamudra you “train with appearances.” The meaning of training with appearances is not inhibiting any experience. It is certain that forms will appear to your eyes and that sounds will appear to your ears; experience is unobstructed, intrinsic. To train means that whatever forms appear in your field of vision, however varied, just recognize the watcher; that is the training. According to Dzogchen, awareness does not need to depend on external appearances. Simply remain in rigpa. Whatever appearance may occur—without trying to prohibit, inhibit, or encourage it—train in awareness itself. Here, “training” means developing a skill, becoming practiced, such as doing physical exercise. Similarly, students in school train by developing some skill, learning something.

In the other case, when training with awareness in Dzogchen, whatever occurs as an experience is beyond benefit and harm. You abandon all appearances and only rest in rigpa. Train in that. In Mahamudra, you train on appearances of the five sense objects. We have the five sense organs and the five external sense objects. Whichever of these may appear or be experienced, you look into the essence of that.

We can say it like this, but as a matter of fact, appearances and rigpa are a unity. You don’t need to inhibit anything, because perceptions are beyond benefit and harm. You do not have to block anything out; all appearances are beyond benefit and harm. In this way rigpa and appearances are a unity. In Mahamudra, when you remain in rigpa, without having any fixation or clinging toward any appearances that may occur, this is the first of the perceptions of the six collections of sensations. They occur, but you do not cling to this occurrence; instead, you train in this nonclinging. The six sense perceptions refer to form, sound, smell, taste, touch, and mental joys and sorrows. When we say the six collections, we have to take into account the various mental joys and sorrows, the five senses, and mental objects. We do not need to cast them away or abandon them. We don’t need to adopt or keep them either. We experience them without rejecting or accepting.

Ordinary sentient beings, on the other hand, cling to perceptions; first they cling, and then they become attached. First there is the cognition or appearance that is called “holding something to be there.” One fixates on a perception. After that, there is attachment to whether it is good or bad. All sentient beings have clinging and attachment. For instance, if you have eyes, then a visual image is sure to appear, right? You perceive it. For example, you perceive a tape recorder and think, “Oh, this is a tape recorder.” First, you think—that aspect is called “holding it to be there.” After that, you discriminate, thinking, “Oh, it’s a good one.” Then, in addition to fixation, you have attachment. Thinking it is not good is anger, and thinking “I don’t care” is stupidity. These three tie us to samsara.

A yogi practitioner has eyes and perceives things. If you have eyes, you will have visual perception, unless your eyes are closed. Whoever has eyes will have visual perception, but whatever is perceived becomes empty perception. If you recognize the essence, then when forms appear, they become the unity of appearance and emptiness. While appearing, they are empty. While being empty, these six collections do occur or manifest. Appearing and being empty occur as a unity. The word “unity” has great significance. Don’t divide appearances as being there and awareness as being here. Let appearance and awareness be indivisible; this is what the Kagyüpas teach. To divide appearances as being there and mind as being here is what sentient beings do. Practitioners, however, do not divide these two, thinking appearances are there and mind is here. They practice the unity of appearance and mind, which is the meaning of “one taste.” That is the reason why things become smooth, easy for the practi-tioner; without that, there would be no way to attain ease.

Here, you train without keeping or discarding. This means that the training you develop is not in the realm of conceptual mind—it is beyond conceptual mind. To bring onto the path means that you mingle the practice with the path of action, the daily activities, without losing the continuity. If the continuity is lost, then you have not brought the practice onto the path.

Finally, you train in appearance and emptiness as a unity. Thus, though there is a difference in terminology, the essential meaning is identical [in both Mahamudra and Dzogchen].
—Tsele Natsok Rangdröl

To develop training on appearances comes after being introduced to emptiness. This is according to the Mahamudra system. You should recognize the four parts without three. Then, in all the paths of action, daily activities, no matter which of the six sense perceptions you experience—since they are self-occurring and self-liberated—you will be able to develop the training, the power of training.

A mother bird will train her babies to fly. Although they do not have the power to fly when they are very small, their father and mother will fly with them and show the chicks how to do it. Then the baby birds will train in the skill. When they are able to fly properly by themselves, they will separate from their parents. When we say training the skill, if you have not first been introduced to what you should train in, then there is no skill to develop. Once you have been introduced to and have recognized mind nature as primordially empty and rootless—that which is empty since the beginning and is free from any basis—then you can train in that recognition.

This is different from just imagining things to be empty and meditating, cultivating that. If you train in that way, it becomes like the mountain stream frozen by the ice-cold wind. Water is uninterruptedly flowing and naturally free. But, when the freezing wind comes in the wintertime, the water becomes stiff and solid. Likewise, if you have not recognized mind nature, there is no skill to develop. You should train in the expression, in the manifestation.

In the Mahamudra system, they talk about essence, manifestation, and expression. The essence is unborn, the manifestation is unobstructed, and the expression is manifold appearances. In our tradition, we talk about the essence, nature, and capacity. The essence is empty, the nature is cognizant, and the capacity is all-pervasive. These are the dharmakaya, sambhogakaya, and nirmanakaya. On the other hand, Mahamudra terminology refers to unborn essence, unobstructed manifestation, and manifold expression. First, you are introduced to the unborn essence as being the empty essence. Afterward, you train in order to develop skill during perceptions, the unobstructed experience.

Through Trekchö (recognizing that your own essence is primordial purity) you understand the view of primordial purity. Through Tögal (recognizing that the nature is spontaneous presence) you realize that spontaneous presence is self-display. Neither of these has any self-nature. The spontaneous presence does not have any self-nature; you cannot take hold of the deities. No matter how much you beat them with a stick, they would never feel any pain. Just joking! Appearances do manifest as deities and you can see them, but you cannot take hold of them with your hand in any way whatsoever, nor can the four elements harm them. They are like forms of rainbow light. That is the meaning of spontaneous presence. When this understanding takes place in the yogi’s mind, then he or she becomes at ease without any troubles. Practitioners never become more and more depressed, more and more narrow-minded, because they understand things as they are.

Since the very beginning, appearance and existence are of the same nature as the three kayas. This reference to the three kayas means that the essence is free from constructs. The essence is empty, the nature is cognizant, and the capacity is unity—this is how awareness is. Sentient beings’ essence is also empty, their nature is luminous or cognizant, and their capacity is unity. Guru Rinpoche explains what is called the “unity of emptiness and cognizance suffused with awareness.”

If a person asks you, “How is mind? What is mind? Tell me briefly.” Then you can say, “It is the unity of emptiness and cognizance suffused with awareness.” Mind is complete within that sentence. Its essence is empty; its nature is cognizant. Its capacity is that these two cannot be taken apart. That is the meaning of unity, impossible to separate. The emptiness and luminosity cannot be divided, right? That is the state of affairs in all beings, yet they do not experience it.

As is stated in the Mahaprajnaparamita: “Transcendental knowledge (prajnaparamita) is inexpressible, inconceivable, indescribable, nonarising, and unceasing—the essence of space itself. It is the experience of individual cognizance, self-cognizant wakefulness or wisdom.” In the case of sentient beings, it is the experience of an individual ignorance, but for yogis it is the unity of emptiness and luminosity suffused with awareness. The wisdom, yeshe, refers to the cognizant aspect, namely rigpa. Sentient beings are of the ignorant aspect. Therefore, sentient beings are described as emptiness and luminosity suffused with ignorance.

In the Kham region of Tibet, there is a saying: “Tell all, like a sack turned inside out.” You have a sack in which you keep things. You then pour them out and turn the sack completely inside out, so nothing is left behind; everything is emptied out. Likewise, in this statement, Guru Rinpoche has turned his sack inside out; he has completely disclosed everything. It is the unity of cognizance and emptiness. Since the very beginning, it is cognizant and empty; these two are a unity. The yogi is suffused with awareness, cognizance. Rigpa means “knowing.” All sentient beings are suffused with ignorance. In this statement, the essential meaning of one hundred lines is contained. It is complete; Guru Rinpoche has turned his sack inside out.

Hasn’t he? Didn’t he completely lay it bare?

Tulku Urgyen Rinpoche (1920–1996) spent thirty-three years at Nagi Gompa Hermitage—twenty of those in retreat—and established six retreat centers and monasteries in Nepal, including Tergar Osel Ling Monastery in Kathmandu. He was recognized as the reincarnation of both the Chowang Tulku and Nubchen Sangye Yeshe (one of Padmasambhava’s principal students). His teachings have been published in the two-volume As It Is and in the new Vajra Heart Revisited, published this year to celebrate the hundredth anniversary of his birth.