Interdependent Origination as defined by Francesca Fremantle, a scholar and translator of Sanskrit and Tibetan works. 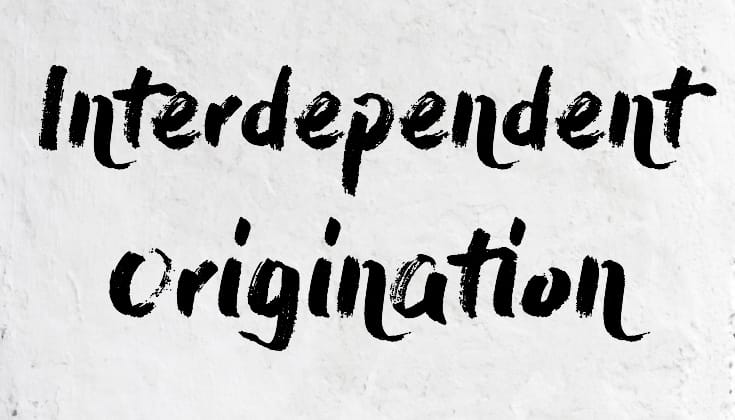 Interdependent origination (Sanskrit, pratityasamutpada) is the law of causality, which the Buddha discovered at his awakening. It revealed to him the whole truth of existence, and in penetrating it he became the Awakened One. What he saw was a total vision of how and why all beings throughout space and time are entangled in samsara for countless lives, as well as his own past lives in his progress toward liberation. This was the extraordinary insight that distinguished his teaching from others, so it is said, “whoever sees interdependent origination sees the dharma, whoever sees the dharma sees the Buddha.” When Assaji, one of the Buddha’s first disciples, was asked by Shariputra about his master’s teaching, his reply was a summary of interdependent origination, which became famous as the fundamental doctrine of buddhadharma:

Whatever things are cause-produced, the Tathagata has told their cause;
and what their cessation is, thus the great ascetic teaches.

According to this law, nothing has independent, permanent, or absolute existence. Everything is part of a limitless web of interconnections and undergoes a continual process of transformation. Every appearance arises from complex causes and conditions, and in turn combines with others to produce countless effects. By interrupting the causal chain at certain key points, the course of existence can be altered and effects prevented by eliminating their causes.

This law embraces all the basic principles of Buddhism. (The late Dilgo Khyentse Rinpoche said that the whole range of teachings, from the shravakayana to dzogchen, has only the meaning of interdependent origination.) It demonstrates the doctrines of karma and rebirth. The three marks of existence are inherent within it: there is no unchanging self in this process, and it is characterized by impermanence and suffering, since whatever comes into being must change and pass away. The four noble truths flow from it: the first truth is the recognition of inherent suffering; the second truth, the cause of suffering, is shown by the law; understanding the cause of suffering leads to its cessation, the third truth; therefore, there is a path to liberation, the fourth truth.

Its best known formulation is the twelve causal links, which has been called the karmic chain reaction. In the traditional image of the Wheel of Life, it depicts the life, death and rebirth of sentient beings, but it can also be understood as the life cycle of appearances, actions, thoughts or any phenomenon whatever. Essentially it analyzes the process of an illusion crystallizing out of emptiness and being taken for reality.

The twelve links are:
(1) ignorance or unawareness, which imagines self and the world to have intrinsic existence;
(2) conditioning, the karmic forces that ripen in the ground of ignorance from seeds sown in previous lives and form the conditioning factors of the next life;
(3) consciousness, arising from conditioning, which carries the sense of self and operates through the mind and senses;
(4) name and form, the totality of an individual’s mental and physical constituents;
(5) the six senses: sight, hearing, smell, taste, touch, and mental faculty;
(6) contact, the meeting of the senses with their objects;
(7) feeling, the positive or negative sensations aroused by contact;
(8) thirst, the desire to possess or avoid these sensations;
(9) grasping, the physical, verbal or mental action that follows thirst;
(10) existence or becoming, the coming into existence that results from grasping;
(11) birth, manifesting in one of the six realms;
(12) decay and death, the process of aging and passing away that inevitably follows birth.

The circle of the twelvefold chain is continuous, a self-contained system without beginning or end. At death we fall back into ignorance and start all over again. The whole cycle can be contemplated in reverse order, starting with death and tracing its causes back to ignorance. Although the links appear sequentially, they may also be seen as interconnected, simultaneous, and mutually dependent. The wheel is a schematic picture, designed to demonstrate the conditioned and relative nature of apparent existence, while exposing sentient beings’ intense attachment and habituation to the causes of suffering.

But on what does the law of causality rest? Nagarjuna declares that interdependent origination itself is emptiness, and this identity is the Middle Way, while the Heart Sutra proclaims “in emptiness… there is no ignorance or extinction of ignorance, up to no decay and death and no extinction of decay and death.” Chögyam Trungpa Rinpoche says of the Wheel of Life, “this wheel is the portrait of samsara and therefore also of nirvana, which is the undoing of the samsaric coil,” bringing to mind his wonderfully vivid image of self-liberation, “the snake-knot of conceptual mind uncoils in space.”

For significant as life and death may seem, genuine as suffering is, and seriously as we must regard the law of karma, as long as we remain within samsara, nothing produced by interdependent origination has ultimate reality. It is an illusion appearing from ignorance, whose nature is the error of belief in self. Since it has never existed it cannot be destroyed. It is dispelled only by the wisdom of nonself. Transcending both existence and nonexistence, it is self-liberated into emptiness, the vast openness of space beyond conceptual thought.

Though she’d planned to become a nuclear physicist, Francesca Fremantle fell in love with India and began studying Sanskrit. At some point, Chögyam Trungpa Rinpoche appeared in her life, so she accidentally became a Buddhist and has wondered ever since what that really means. Francesca Fremantle is the author of Luminous Emptiness: Understanding the Tibetan Book of the Dead .