Meditation is getting mainstream enough to attract the attention of big league advertisers. Good news or the beginning of the end? Rod Meade Sperry analyzes the latest videos from KFC. 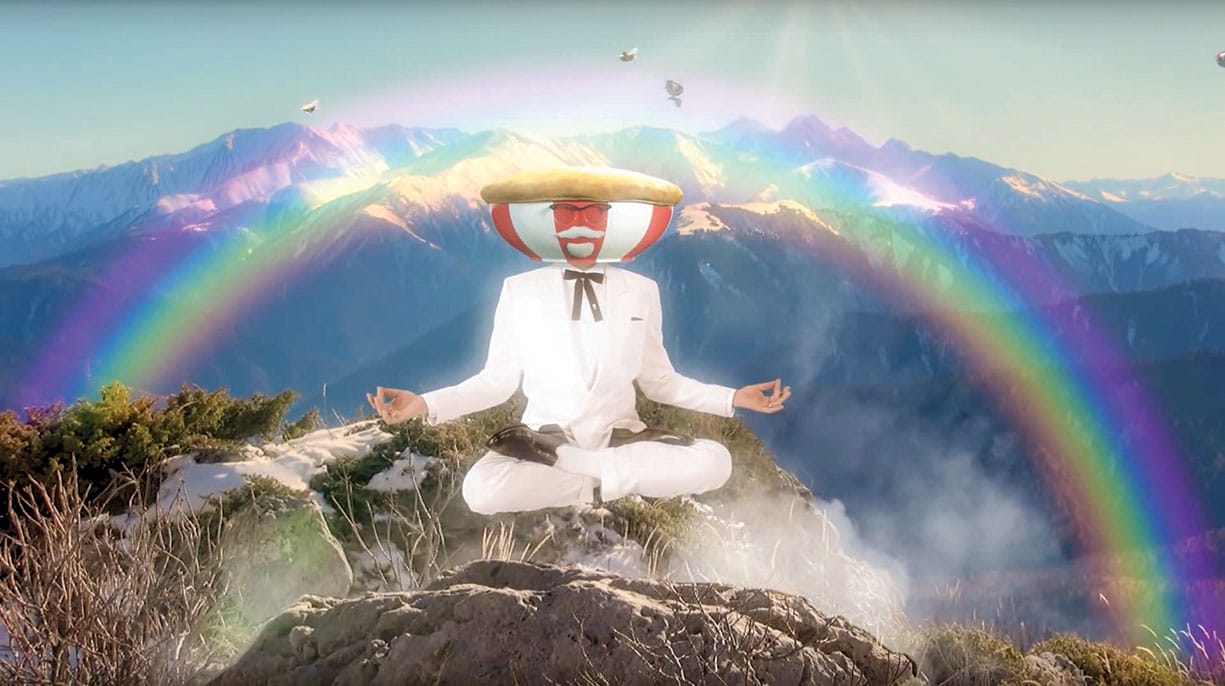 Screenshot from KFC’s “Welcome to the Comfort Zone” video, 2018.

I don’t mean just to be glib when I invoke the famous Virginia Slims cigarettes tagline, which debuted in 1968 to take advantage of the surging women’s movement. Because, really: when a global fast-food giant invests in thirty-five minutes’ worth of videos that parlay tropes from meditation, Eastern religion, secular mindfulness, and the very counterculture that was birthing alongside Virginia Slims—all in order to hock chicken pot pies, of all things—just how unimaginable would, say, cigarette marketing that quotes the Buddha be?

When breathing out, know: it’s smooth!

Okay, I’m being at least a little facetious. But the launch of KFC’s “Comfort Zone” YouTube videos—which depict Colonel Sanders reborn as a multiplicity of spinning, pot-pie-headed meditators leading us through a kaleidoscopic outer/inner-space realm on a psychonautic quest for savory meat pastry—do make one wonder just how far things might go.

The ads, which range from three-plus to about nine minutes long, are the work of Wieden + Kennedy, an agency renowned for its willingness to be weird. But these take things up a notch. Blending highbrow and lowbrow, stoner humor—I think we now know at least one of the “11 herbs and spices” in the Colonel’s secret recipe—and philosophical references, these videos are about as bizarre as advertising to the masses gets.

That this kind of well-funded and brazen co-optation is coming at us from a mega-corporation (KFC is a subsidiary of Yum! Brands, which also owns Pizza Hut and Taco Bell), much less a problematic one that serves animals en masse and has a dubious track record in animal welfare, isn’t in itself surprising. (Nor is it surprising that even the Dalai Lama has spoken out against KFC, when they tried to open shop in Tibet in the early 2000s.)

There’s nothing new about this sort of thing. Thomas Frank’s brilliant book The Conquest of Cool documents how Madison Avenue, noting that the 1960s counterculture was only getting stronger, decided that it’d rather switch than fight—and started jamming copy about “joining the revolution” and “sticking it to the man” into every campaign they could, no matter how square.

What is surprising is just how out-there the content here really is. And I use the word “content,” here intentionally, because, lo, these videos transcend mere advertising. Together, they compose a “system” of “ground-breaking personal meditation, mindfulness, and affirmation based on the incredible power of KFC’s signature pot pie,” through which “comfort and enlightenment can be yours today.”

And all the appropriate—or appropriated—signifiers are present: we see the Colonel meditating and doing tai chi, we see finger cymbals and mandalas, and the chakra system retooled to relate specifically to pot-pie consumption. We hear the narrator’s soothing voice (which recalls for me a logy Alan Watts) say, more than once, “Namaste.”

Sometimes, he gets things right, though this is likely by accident. “The chicken that accompanies those vegetables,” he waxes about the pot pie’s ingredients, “is the result of a million-year journey toward your mouth.” This statement recalls the Zen meal chant that reminds us, “72 labors brought us this food; we should know how it comes to us.” But do we really want to know how this food comes to us? Probably not.

In one video, the narrator counsels us that, after unwrapping our sporks, we should “take the extra plastic and throw it as far away from you as possible. Mother Earth will recycle it as future sporks.” (Did I mention that KFC isn’t exactly beloved for its environmental responsibility, either?) You can taste the stupidity. But then, the video turns into a lesson on duality and non-duality. Really. Kind of.

And such hints of smartness, or the appearance of smartness, coupled with the absurd visuals and voiceover, make for an awful lot of fun—on the surface, at least.

Adweek wrote in their coverage of these ads: “Remember when Don Draper had his epiphany at the meditation retreat? … The appropriation of meditation techniques for consumerist ends is very Draper-esque—Don’s spiritual awakening in Mad Men, of course, being little more than his discovering a new way into a better advertising pitch.”

Oh yeah, I remember that well. It played like a moment from The Conquest of Cool come to life—just replace the revolution in the streets that corporations had been co-opting with the revolution of the mind on offer by Eastern Religion. As a Buddhist media-watcher, I was rapt. And maybe a little too willing to give ol’ Don a pass.

This time it was the Colonel’s turn. Now, I’m hardly about to rush out for a pot pie, but it wasn’t long before these videos found me laughing. Which makes me, while no bullseye, surely part of the intended target market. What’s more, by getting me laughing, they seduced me, for a moment, into forgiving KFC for its sins. Now, that’s good advertising. Funny, isn’t it, how often “good advertising” and “bad advertising” are the same thing?

But that doesn’t mean all advertising is bad. Okay, yes, advertising’s ubiquity and constancy is pretty much inescapable, unless you live in a monastery. (Hmm: that’s a pretty good sell-line for a monastery.) And that’s bad. But what I want to know is, given all that, when it comes to dharma, where do you draw the line?

There are advertisements, of course, in this magazine, telling you about retreats and Buddhist centers and, yes, products, that you might benefit from and otherwise not know about. I don’t think that’s bad. Even the magazine’s cover, it must be acknowledged, is a form of advertising. It’s designed to entice you to look inside. (And, hopefully, within.)

These KFC videos: what are they designed to do?

They are designed—beautifully, hilariously so—to subvert that idea of looking within. They will lead exactly no one to meditate, or do tai chi, or explore Heraclitus or thermodynamics or any of the other concepts they namecheck.

To this Buddhist media-watcher, they are simultaneously the best thing ever and the worst thing ever. (Another little lesson on duality and non-duality.) They are in themselves evidence that meditation, when it comes to mass-acceptance, has come a long way.

But, baby, we still have a long way to go.