Music connects us to the present moment like nothing else, says Teenage Bottlerocket bassist Miguel Chen. In this excerpt from his new book, I Wanna Be Well: How a Punk Found Peace and You Can Too, coauthored with LionsRoar.com editorial director Rod Meade Sperry, Chen explains how to really listen to music. 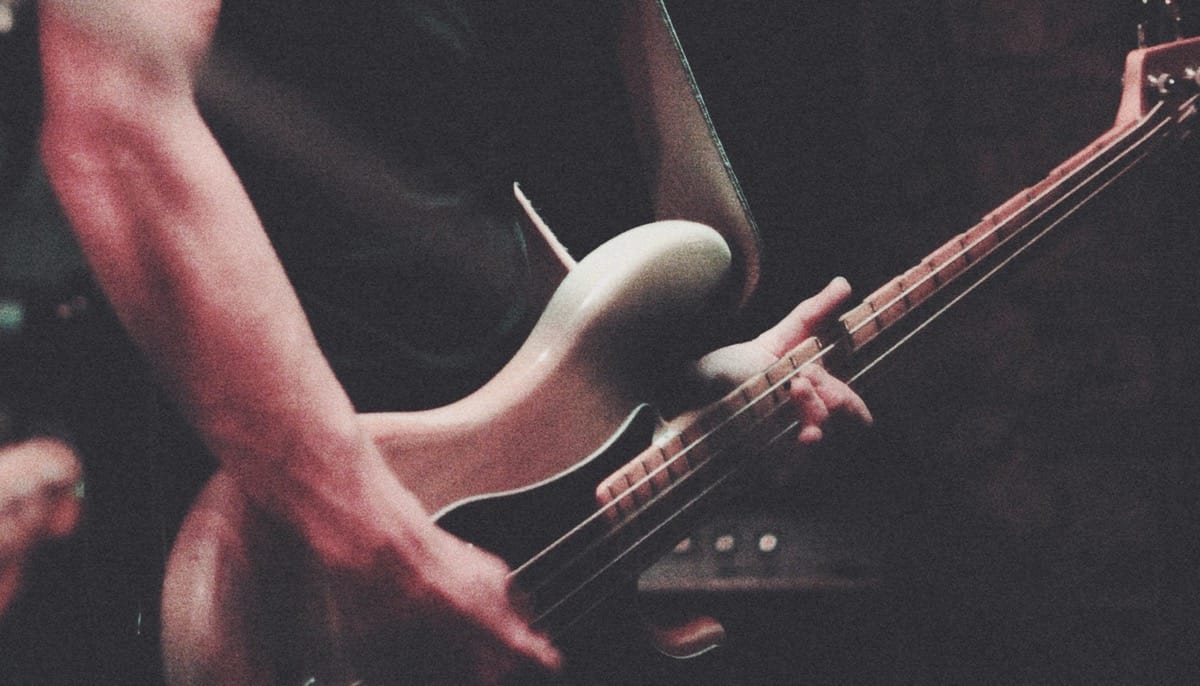 Playing shows, writing songs, recording albums, and most of all, listening to music—it’s all a huge part of my life.

I think a lot of this came from my mom. She seemed to always be singing, or playing piano or percussion, or dancing. From an early age, because of her, I saw just how much music could fill people with joy. I wanted a piece of the action.

When I was in second grade, she enrolled me in private guitar lessons. By fifth grade, I was playing saxophone, inspired by Mom’s big band records. I kept up with the sax through junior high and high school. I was even offered a full music scholarship at the University of Wyoming. I turned that down, though. I liked the music education I’d had up to that point, but wanted to do things my way.

Rewind a few years to sixth grade. Kids a couple of grades older than I was had gotten into punk rock and skateboards. I’d known about Green Day because, you know, the radio, but these kids seemed to be in on a really good secret. One guy had a T-shirt that was a play on the Trix cereal box, but it instead of Trix, it said NOFX. I had no idea what that meant, but I knew it was rad.

You know that feeling of being lost in a song? When that happens, you’re not lost—you are connected to the music as it unfolds here and now.

When I finally heard NOFX, I was hooked. I started digging deeper, checking out as many punk-rock bands as I could. Descendents, Ramones, Rudimentary Peni—these bands made me want to play music, loud. Saxophone? Acoustic guitar? I wanted to go electric. So I saved up whatever money I could, begged my friends for donations, and bought my first electric guitar: some piece of shit Kramer that still sits broken in my basement. I was thirteen.

I started a band. We sucked—bad. It didn’t matter, though: we were having the best time ever. We were coming alive, connected to something.

Of course, we broke up. So I did the only thing you can do in that situation: start another band. All I wanted to do was play music and travel.

Eventually I found myself going on tour selling T-shirts for a band called Teenage Bottlerocket. Then one tour, the old guitarist for TBR had to pull out at the last minute. I had spent so much time with the other guys that I was the natural choice as a replacement. I couldn’t believe it: I had just been promoted to a full-time member of my favorite band! They asked if I wanted to play guitar or bass. I said bass, because honestly I thought it’d be easier to learn all the songs in time. Now I’m a bass player.

Now, having spent more than the last decade making records, going all over the world, and playing shows of all sizes with my best friends, I feel so blessed. TBR has gotten to do everything we ever wanted with our music. We’ve put records out on our favorite labels, toured with our favorite bands, seen so many countries, and all while doing something we love. And music has loved us back, giving our lives shape.

Maybe you haven’t dedicated your life to sitting in a van with your friends and waiting to play shows (or maybe you have!), but I’m willing to bet music has been a companion in your life as well. Rock-and-roll, country, hip-hop, jazz, pop, punk, salsa, klezmer—there’s music out there for everybody, except maybe my dad. I don’t think he listens to music. Why do the rest of us love music so much? Because it really connects us. When we’re really listening, with our whole beings, we can let go of distractions and be fully, 100% connected to the present moment. You know that feeling of being lost in a song? When that happens, you’re not lost—you are connected to the music as it unfolds here and now. That’s a special kind of connection: the beauty that comes from being fully present with whatever the moment brings. Music can bring us there faster than a lot of things.

Music can be a very powerful tool of connection, if you let it.

And it doesn’t have to be a song on the radio. It can be hitting a couple of pencils on a table or a bucket. It can be the song of a bird outside your window at five in the morning.

In bhakti yoga, the yoga of devotion, music is often used specifically as a tool for connection. Part of this connection and devotion is expressed and realized through kirtan, a musical form of chanting from the heart. Through kirtan, we leave ego aside and connect to something bigger. For some, that “something bigger” is God; for some, it’s nature or the universe. Again, you don’t have to see things the same way. Music can connect you to whatever you need connection to, with or without a higher power involved. Take what serves you, and leave the rest. (Some might argue that music in and of itself is a higher power—and I’d be inclined to agree with them.)

Back in the day, kirtan would be about the last thing on earth I’d ever listen to or participate in. After a couple of experiences with it, though, I’ve found it to be a pure form of connection, very similar to the connection I feel when playing a show or listening to my favorite Ramones tracks. Whatever you’re into listening to, just remember that music can be a very powerful tool of connection, if you let it. I’m not sure I can imagine a perfect day without it.

So, the next time you need to take a break from the rest of life and find yourself connected to your heart again, give music a try. But don’t just throw something on in the background. Listen mindfully. This practice shows you how.

Let’s spend some time connecting to our deeper selves by mindfully listening to music. Instead of just throwing music on as background noise and doing a hundred other things, let’s really listen.

Find a space without distraction near your stereo. If you have a record collection, bust out the vinyl. If you don’t, don’t worry about it. I’m not a vinyl purist like many of my friends, though I agree it might help in this particular practice. It’s totally not necessary though. Grab your favorite record, or CD, tape, mp3, whatever.

Headphones might help for this practice, but again they are not completely necessary. The important thing is to set yourself up to just listen to music and do nothing else. Turn your phone off for a minute. Put away any other distractions. It’s time.

Reprinted from I Wanna Be Well: How a Punk Found Peace and You Can Too with permission from Wisdom Publications, 199 Elm Street, Somerville, MA 02144 USA. www.wisdompubs.org