Llundup Damcho reports on the Seventeeth Karmapa’s vow to reinstate full ordination for women in the Tibetan Buddhist tradition. 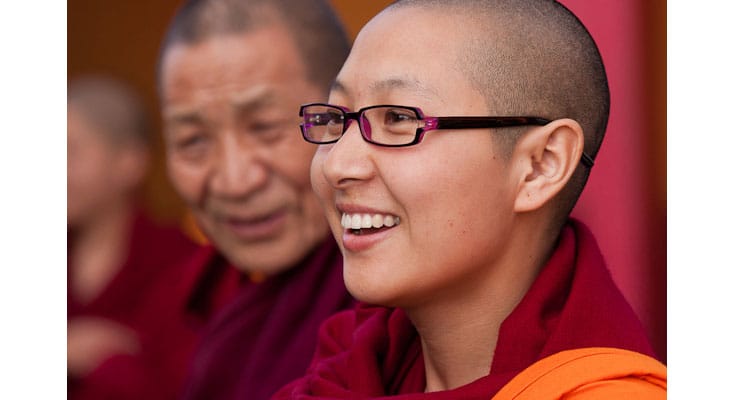 The Seventeenth Gyalwang Karmapa stunned an international audience in Bodhgaya last winter by making an unprecedented declaration of commitment to ordaining women as bhikshunis in the Tibetan Buddhist tradition. when there would be bhikshuni ordination in the Tibetan tradition, he leaned forward and said, in English, “I will do it.”

As applause broke out, he cautioned against expecting quick results. “Be patient,” he said. “Be patient.”

This proclamation by Ogyen Trinley Dorje, the Seventeenth Karmapa, was groundbreaking, for it was the first time that a Tibetan Buddhist leader of this stature had publicly committed to personally making bhikshuni ordination available. His declaration came after intensive research into the feasibility of establishing full ordination for women according to the monastic code that regulates Tibetan Buddhism. More broadly, it reflected the Karmapa’s dedication to addressing women’s issues, especially regarding nuns.

At present, women in Tibetan Buddhism may take ordination as novice nuns (Tibetan: getsulmas), but they do not have the opportunity to take the highest level of ordination that the Buddha created for women: bhikshuni, or gelongma, ordination. While full ordination for women is available in Chinese, Korean, and Vietnamese traditions, and has recently been reestablished for nuns in the Sri Lanka Theravada tradition, Tibetan Buddhism lags behind in the movement toward providing equal spiritual opportunities to women.

For several decades, the Dalai Lama has consistently spoken out in favor of bhikshuni ordination, but progress toward that goal has been incremental, consisting mainly of conferences and discussions. The Karmapa’s acceptance of a personal role in extending the opportunity of full ordination to women is a decisive step forward on a path that the Dalai Lama first asked Tibetan Buddhists to traverse.

The Karmapa traces his involvement with the bhikshuni issue to the time when he instituted new discipline rules for monastics attending the Kagyu Monlam Chenmo. “We were deciding how to organize the gelongs and getsuls, and there were some gelongmas from the Chinese tradition. Then we needed to think: Where do they sit? How do we make arrangements for them?” Since that time, bhikshunis have been given a prominent place at the annual Kagyu Monlam events in Bodhgaya, with special invitations issued to bhikshunis.

As well, the Karmapa has taken on the task of translating a volume of biographies of Chinese nuns from Chinese into Tibetan. While that project is ongoing, he also has plans to translate a collection of narratives of the lives of Buddha’s direct female disciples from the classical literary language of the Tibetan canon into colloquial Tibetan so the examples of these early nuns’ lives are more accessible to modern Tibetan readers.

Not Just a Women’s Issue

Just before his public statement in Bodhgaya, the Karmapa presided over a five-day Vinaya conference he had convened during the Kagyu Winter Debates. He spoke at length to the gathering of Kagyu khenpos, monks, and nuns about the importance of establishing bhikshuni ordination in Tibetan Buddhism. He pointed out that the Buddha himself offered bhikshuni ordination to women as a means to bring about their liberation from samsara. The need to offer women all the conditions to achieve liberation, he said, is particularly clear from the Mahayana perspective of compassion and sense of responsibility for the well-being of others. Nowadays, he noted, the majority of those seeking teachings in dharma centers outside India and Tibet are women.

The Karmapa went on to explain that bhikshuni ordination was needed to enable the teachings to spread and become fully accessible to everyone. He said the four circles of disciples that the Buddha created— bhikshus, bhikshunis, female holders of lay precepts, and male holders of lay precepts—were like four pillars in a house. And since the bhikshuni order was one of those four pillars, the Tibetan house of Buddha’s teachings was missing an important condition needed to remain stable.

He suggested that although there were procedural issues to be resolved, any obstacles needed to be weighed against the great need to offer bhikshuni ordination to qualified female candidates. As such, he stressed, research into the surrounding issues ought to take place with an appreciation of the need to offer women the opportunity to follow the complete path to liberation that the Buddha created for them.

Earlier in 2009, the Karmapa summoned khenpos from the major Karma Kagyu monasteries for several months of study and research under Vinaya experts at his residence in Dharamsala, and was directly engaged in exploring the various options for conferring valid full ordination of women. According to the Mūlasarvāstivāda Vinaya followed by Tibetan Buddhism, standard ordination practices stipulate that a sangha of bhikshus as well as a sangha of bhikshunis be present at the ritual ceremony to fully ordain women. Yet a bhikshuni order does not appear to have been brought to Tibet from India. This absence of bhikshunis in Tibetan Buddhism has been a stumbling block for those seeking to establish full ordination for women.

Although it did not result in the formation of a bhikshuni order in Tibet, a number of great Tibetan masters of the past did fully ordain some of their female disciples. Such masters include no less authoritative a figure than the Eighth Karmapa, Je Mikyö Dorje, one of Tibet’s greatest Vinaya scholars. “We rediscovered an old text on rituals in the collected works of Mikyö Dorje,” the Seventeenth Karmapa said. “In that text, Mikyö Dorje said that in Tibet there was no bhikshuni lineage, but that we can give bhikshuni vows using the bhikshu rituals. I thought, ‘Oh! This is news!’ I thought, okay, maybe… This was a sort of small beginning.”

These days, two major options have been considered in Tibetan monastic circles. One is ordination by a bhikshu sangha alone, which would consist of monks from the Tibetan Mūlasarvāstivāda tradition. Another is what is known as “dual sangha ordination,” in which the sangha of Tibetan bhikshus conferring the ordination would be joined by a bhikshuni sangha from a separate Vinaya tradition, the Dharmagupta lineage that has been preserved in Chinese, Korean, and Vietnamese Buddhism.

“I do not think there are major obstacles or challenges,” the Karmapa said. “But we do need to develop our views on the matter. There are some old views and old ways of thinking, and people who hold them are not prepared to accept bhikshuni ordination. But I do not think this is a big obstacle. The main need is for some leader to take a step, to move beyond conferences and discussions. What is needed is to take full steps.”

Many Tibetan Buddhists have looked to the Dalai Lama to take the initiative in organizing bhikshuni ordinations. When the Karmapa was asked why he was now willing to accept the responsibility for doing so, he said: “His Holiness the Dalai Lama always takes responsibility. But he has lots of activities and is very busy, so he cannot devote a great deal of his attention to this issue and try to find sources and join every conference himself. He cannot simply focus on this issue. Maybe I have more time, and so more opportunities to find some sources and hold conferences. And I also have some sort of personal interest in it myself.”

The Karmapa articulated his personal connection and commitment at the conclusion of a series of teachings at Tilokpur Nunnery in India in 2007 by stating: “My body is male, but my mind has lots of feminine qualities, so I find myself a little bit both male and female. Although I have high aspirations to be of benefit to all sentient beings, I especially have a commitment to work for the welfare of women and especially of nuns. As long as I have this life, I would like to work one-pointedly and diligently for their cause. I have this responsibility as the head of this school of Buddhism, and from that point of view also, I promise that I will do my very best to see that the nuns’ sangha will progress.”

Llundup Damcho (Dianna Finnegan) was ordained as a getsulma, or novice nun, in 1999. She studied Buddhist philosophy for seven years with Geshe Lhundup Sopa, her preceptor, and produced the English translation of the Sanghata Sutra. In 2009, she received her doctorate from the University of Wisconsin at Madison, working on Sanskrit and Tibetan narratives about Buddha’s female disciples. She is a student of the Seventeenth Gyalwang Karmapa, and lives in north India in the Dharmadatta Nuns’ Community (www.nunscommunity.net), which was founded by and for Western women and is guided by the Karmapa.