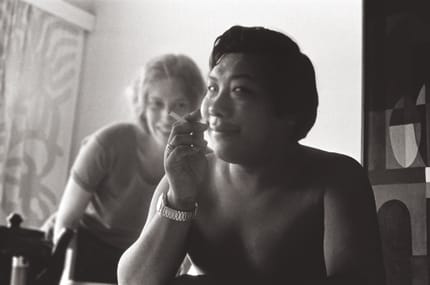 Buddhadharma sits down with Johanna Demetrakas, an award-winning filmmaker, to discuss her latest film, Crazy Wisdom: The Life and Times of Chögyam Trungpa Rinpoche, which premiered in 2011.

What inspired you to make a film about your teacher, Chögyam Trungpa?

In 1983 I was in Boulder editing the film The Lion’s Roar. At a private interview with Rinpoche, he asked me to make a “Shambhala film.” Frankly, I didn’t know what a Shambhala film would or could be, but I said yes. Four years later, he was gone. I directed the filming of his cremation and made a short edit from the sixteen-millimeter footage, but there was no funding to develop a proper film. Years went by, during which I taught a lot of Shambhala training. Then one day I woke up and realized what my Shambhala film had to be.

Were you concerned about how difficult it might be to truly capture on film who Chögyam Trungpa was and what he accomplished?

More than concerned. At times I was sure it was an impossible feat and I must have been mad as a hatter to attempt a definitive documentary biography on such a being. My direction to myself was to make a film that gave general audiences an opportunity to experience a glimpse of his immediate limitless radiation of crazy wisdom, and to offer his unique grasp and expression of the Buddhist teachings. All the rest of it—dharma art, poetry, humor, drinking, the girlfriends, the military—are offsprings of his genius. I wanted to give my audience an opportunity to see all that in the most simple, direct way, while giving them enough time to form their own opinions about it. And then continuously bringing them back to that glimpse of his mind. In other words, I left it up to him.

What was the biggest challenge for you?

There were many challenges, such as raising money and trying to maintain the highest quality technically and artistically without enough funding. I have to give a shout-out to Bill Russell, our superb colorist and graphic designer. The footage came in almost every format possible: eight millimeter, sixteen millimeter, old black-and-white VHS, various forms of color Beta, standard DV, HDV, stills, you name it. To create a fluid viewing experience, Bill suggested that the best way was to color correct and convert every shot to twenty-four frames per second. This took months, and was way beyond my budget. But Bill finished the job. The result was a more beautiful film, which made a huge difference for the audience. I like to think it was the kind of attention to detail that would have pleased Rinpoche.

It was also a challenge to trust myself in the thousands of decisions one makes creating a film. In documentaries, there’s the story, the craft, and if you’re lucky, the underlying art that triggers unmanipulated emotion by telling the truth with dignity and respect for all, including the audience. No one else can do that for you, so I had to trust myself to know when it was right. And then, somehow, after almost five years of active filmmaking, knowing when it was finished.

Were there any surprises?

I learned so much. We went to Scotland and England for three weeks and interviewed extraordinary people there. We made trips to Tibet, Halifax, Boulder, New York, Pennsylvania, California. I interviewed sixty-eight people. Tibet was the deepest learning experience. It surprised me when I realized how very Tibetan Trungpa Rinpoche was. There’s a physical strength, like a rock, that Tibetans have, and enormous pride that isn’t personal. Also a beauty in how they present themselves. I remember a woman breaking up rocks. She was wearing a beautiful red silk shirt under a tidy, embroidered jacket, and she was swinging a sledgehammer with a big smile.

You worked with Chögyam Trungpa on a few film projects. What did you learn from those experiences?

He gave cinematographer Baird Bryant and me exercises to shoot images that reflected the qualities of the five Buddha families, one of the most fundamental teachings in the Buddhist system. The Buddha families represent five aspects not only of enlightenment, but of the energies of a neurotic state of mind. The neurotic aspect of a vajra shot, for example, might be sped up pedestrians passing a little boy, showing aggression and narrow awareness in their speed. This teaching made me aware of the energy in a shot, the tension that brings an image to life. Nothing was ever one-dimensional. Film is a two-dimensional art form, but at its best it’s experienced as if it were in three dimensions. He appreciated space in images, always looking for a frame that has a foreground, middle ground, and background. He was very connected to every image he created—like giving birth.

You’ve directed a number of documentaries. What draws you to this form?

With documentaries, you are always looking for some kind of truth. I love diving into new worlds and learning intimately how they work. Unlike scripted films, you never know where it’s going to go, what’s going to happen. The film is “found” in the editing. It’s actually the writing of the film, so the creative process is challenging all the way through. If you make documentaries too solid, they won’t reflect life.

What do you hope viewers will take away from this film?

I hope viewers will feel something genuine in their hearts. I hope it will give them greater confidence in their own humanity and that they’ll be inspired by that to be more open to others. Rinpoche was a visionary, seeing both the dark side of society and its creative potential. He had unshakable confidence in our basic goodness. I hope that comes through in the film. Apart from that, it makes me happy when people laugh out loud and feel uplifted.