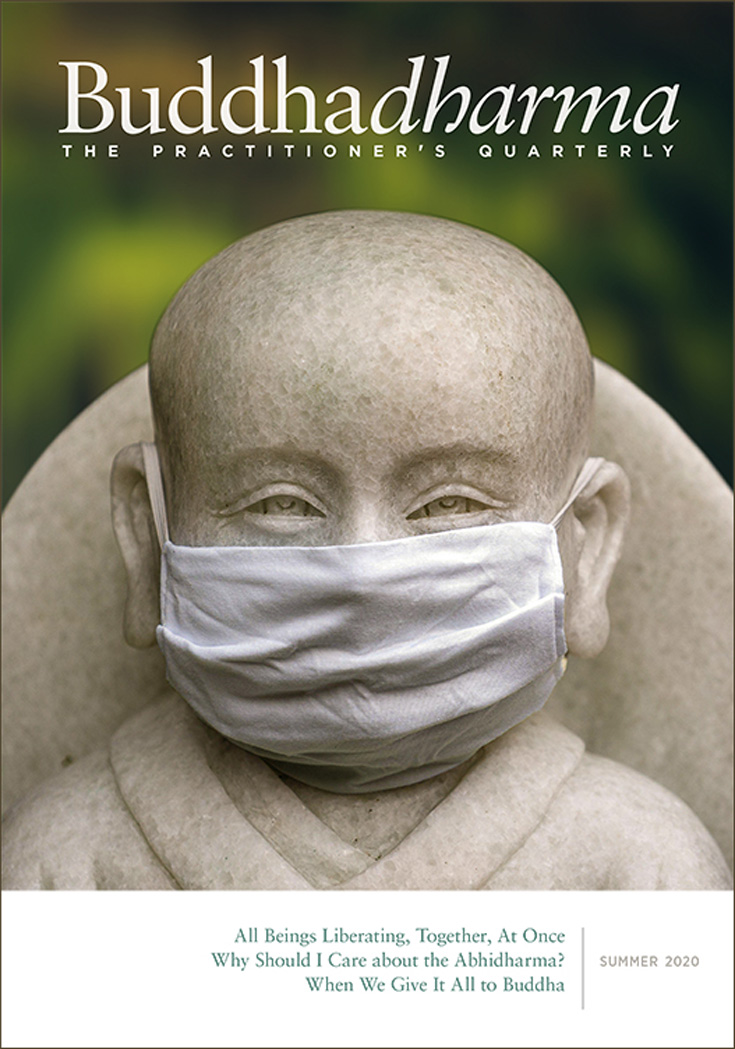 The Summer 2020 issue of Buddhadharma: The Practitioner’s Quarterly features in-depth teachings for cultivating your Buddhist practice and manifesting those teachings meaningfully in everyday life. Inside, you’ll find thoughtful commentaries, reviews of the latest Buddhist books, Ask the Teachers, and more.

In Times of Crisis, Draw on the Strength of Peace

When we are called upon to help in a crisis, says Kaira Jewel Lingo, we must respond. But the way we do is crucial.

Why Should I Care about the Abhidharma?

At first glance, the Abhidharma, with all its lists and analysis, may not seem so inviting. But give it another look, says Steven D. Goodman — it explains the entire world.

When We Give It All to Buddha

How do we make offerings to Buddha? First we find Buddha everywhere, says Kokyo Henkel — and then we offer everything.

Forum: How Millenials Are Reframing the Buddhist Path

Young Buddhists are adopting a broad, inclusive vision of Buddhist teachings and practice. In this Buddhadharma Forum, Gesshin Greenwood, Matthew Hepburn, Chenxing Han, and Lama Bryn Dawson take a look at where Buddhism is, and where it’s headed. Moderated by Ray Buckner.

All Beings Liberating, Together, At Once

Judy Roitman unpacks the Mahayana vision. “The essence of this vision,” she says, “is a universe in which time and space are flexible, and in which beings are neither separate nor dissolved in each other.”

As China is changing, so is Chinese Buddhism, morphing to meet cultural forces and adapting to find a place in the economy. Justin Ritzinger provides an inside look.

Blooming in the Bardo by Tynette Deveaux

“Zen teachings speak of the importance of not knowing, or ‘don’t know mind.’ Trying to stay with that mind has been a powerful practice for me — more than once, it’s kept me from jumping to an incorrect assumption or unskillful action. But at some point, don’t we also need to do something? What’s the threshold for saying, ‘I know I don’t know, but I know enough to draw a conclusion and act on it’?

The Life of the Buddha  by Heather Sanche; illustrations by Tara Di Gesu

Guardian of a Dying Flame: Sariputra (c. 1335-1426) and the End of Late Indian Buddhism by Arthur McKeown

Mindfulness: Where It Comes From and What It Means by Sarah Shaw

Introduction to Buddhist Economics: The Relevance of Buddhist Values in Contemporary Economy and Society by Ernest C.H. Ng

A Wild Love for the World: Joanna Macy and the Work of Our Time edited by Stephanie Kaza