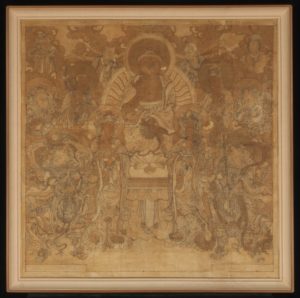 From the archives of Buddhadharma, the late scholar and translator Taitetsu Unno defines several key terms of Shin Buddhism.

Pure Land: Translation from the Chinese ching-t’u (jodo in Japanese). The term as such is not found in Sanskrit, the closest being the phrase “purification of the Buddha Land.” Shinran describes it as the “Land of Immeasurable Light,” referring not to a place that emanates light, but a realization whenever one is illuminated by the light of compassion.

Birth in the Pure Land: Symbolic expression for the transcendence of delusion. While such a birth was thought to come after death in traditional Pure Land thought, Shinran spoke of its realization here and now; for example, he states, “Although my defiled body remains in samsara, my mind and heart plays in the Pure Land.”

Amida Buddha: The Buddha of Immeasurable Light and Immeasurable Life, who as Dharmakara Bodhisattva fulfilled forty-eight vows to save all sentient beings and attained supreme enlightenment.

Nembutsu: The practice of reciting Namu-Amida-Butsu (the Name of Amida) is known as recitative nembutsu. There is also meditative nembutsu, which is a method of contemplation. Nembutsu is used synonymously with myogo, or the Name.

Name-that-calls: Interpretive translation for Namu-Amida-Butsu, which is Amida Buddha’s beckoning call to human beings to take leave of delusions and awaken to reality, including the self, as it is.

Shinjin: True entrusting realized as the result of being transformed by the light of boundless compassion, enabling a person to simultaneously affirm karmic limitations and attain freedom from their binding shackles.

Other Power (tariki): The working of the boundless compassion of Amida Buddha, which nullifies all dualistic notions, including constructs of self and other. According to Shinran, “Other Power means to be free of any form of calculations (hakarai).”

Myokonin: Literally, “wonderful, good person.” Devout, sincere followers of Shin Buddhism who came from the lower classes in pre-modern times. They had little formal education, but their sayings are imbued with deep spirituality.

Taitetsu Unno (1929-2014) was a scholar and teacher in the Shin Buddhist tradition, as well as the Jill Ker Conway Professor Emeritus of Religion at Smith College. One of the leading authorities in the United States on Shin Buddhism, his work as a translator has made many important Buddhist texts available to the English-speaking world.