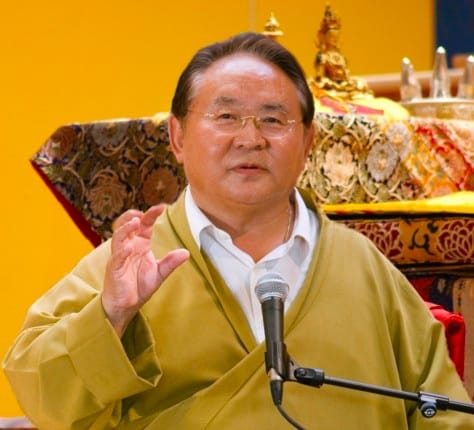 “As long-time committed and devoted students we feel compelled to share our deep concerns about your violent and abusive behavior,” the letter reads. Later:

“Those of us who write to you today have firsthand experience of your abusive behaviors, as well as the massive efforts not to allow others to know about them. Our concerns are deepened with the organizational culture you have created around you that maintains absolute secrecy of your actions, which is in sharp contrast with your stated directive of openness and transparency within the Sangha. Our wish is to break this veil of secrecy, deception, and deceit. We can no longer remain silent.”

The twelve-page letter then addresses, in detail, four areas of alleged behavior by Sogyal Rinpoche: physical and psychological abuse of students, sexual abuse of students, a “lavish” lifestyle, and that his actions have “tainted our appreciation for the practice of the Dharma.”

The allegations are numerous, and graphically presented, alleging, for example, that:

“Your physical abuse – which constitutes a crime under the laws of the lands where you have done these acts – have left monks, nuns, and lay students of yours with bloody injuries and permanent scars.”

“there are hundreds of examples of trivial incidents that have set you off and your response has been to strikes us violently [. . .] Your emotional and psychological abuse has been perhaps more damaging than the physical scars you have left on us”

“You use your role as a teacher to gain access to young women, and to coerce, intimidate and manipulate them into giving you sexual favors. The ongoing controversies of your sexual abuse that we can read and watch on the Internet are only a small window into your decades of this behavior.”

“Much of the money that is used to fund your luxurious appetites comes from the donations of your students who believe their offering is being used to further wisdom and compassion in the world.”

Our heartfelt wish is that you seek guidance from the Dalai Lama, other reputable lamas of good heart, or anyone who can help to bring you back onto the true path of the Dharma.

The letter references and links to still other complaints (including a recently circulating account alleging that, as the letter puts it, “Sogyal [Rinpoche] gut-punched a nun in front of an assembly of more than 1,000 students at Lerab Ling in France, August 2016″), and links to resources and “a blog where concerned students can connect with each other.”

Update: On Friday afternoon, July 21, Lion’s Roar received from Rigpa a press release in response to the letter; it indicates that Sogyal Rinpoche will “step back” as the community looks into next steps. Read “Rigpa press release responds to letter detailing allegations of abuses by Sogyal Rinpoche” here.