You’ve seen his distinctive single-panel comics everywhere—they’re published in 360 newspapers, and the panels are shared wildly all over the web. Including here on Lion’s Roar—because its often clever, sometimes puntastic, always funny creator Dan Piraro loves a good joke about Buddhism and meditation.

Here’s a little gallery of hits: 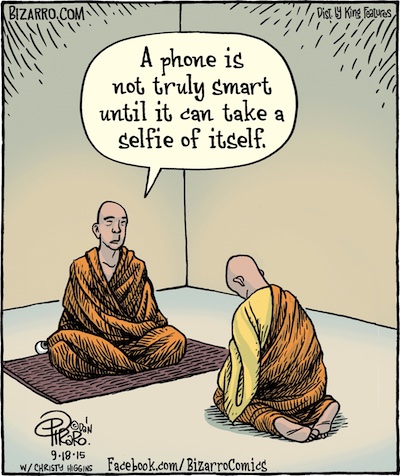 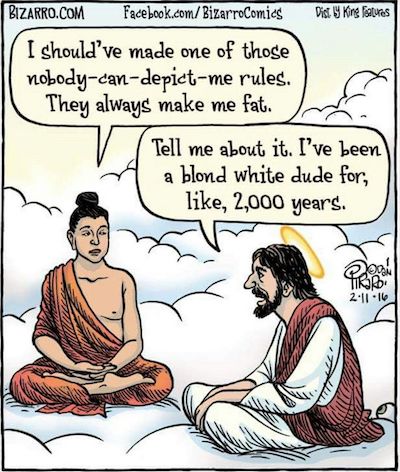 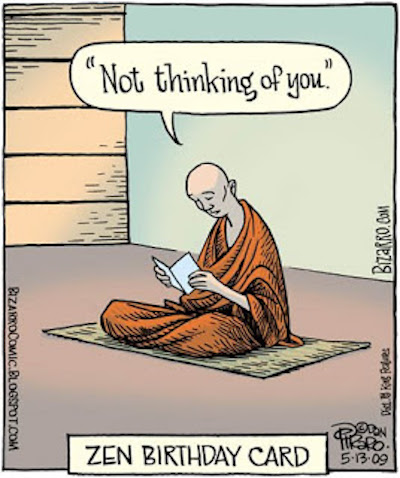 And here’s his latest: 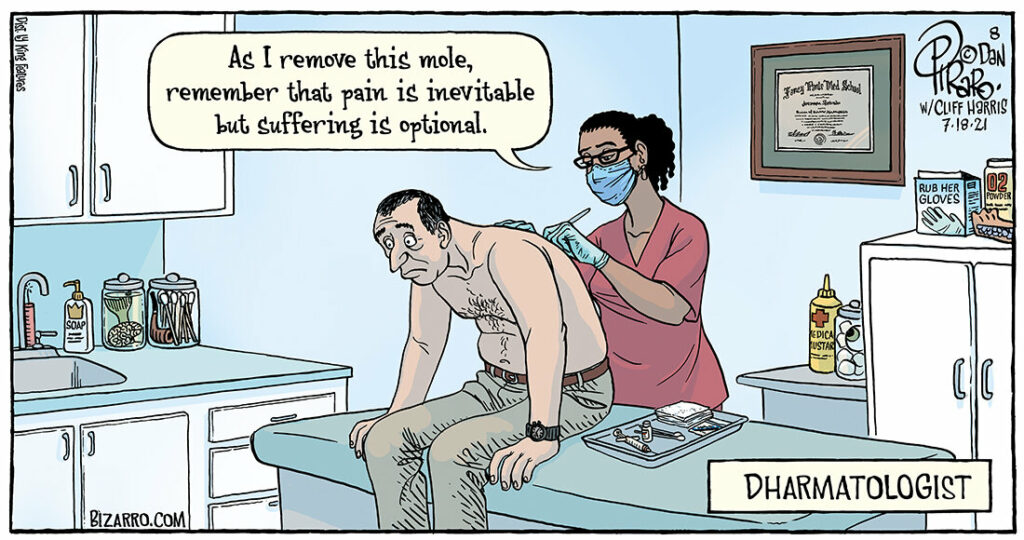 But meditation is not just fodder for Piraro’s jokes. It’s fodder for our real lives, our reality, his included. Hence his post last week, in which he wrote about open-mindedness, how we perceive reality, and how mindfulness and meditation can help. What the cartoonist has to say made me recall the opening lines of the Dhammapada, the concise compilation of the Buddha’s teachings:

Mind is the forerunner of all actions.
All deeds are led by mind, created by mind.
If one speaks or acts with a corrupt mind, suffering follows,
As the wheel follows the hoof of an ox pulling a cart.

Mind is the forerunner of all actions.
All deeds are led by mind, created by mind.
If one speaks or acts with a serene mind, happiness follows,
As surely as one’s shadow.
[Quoted from the 1995 Parallax Press edition of the Dhammapada, translated by Ven. Ananda Maitreya]

We talk about open-mindedness all the time and it’s not just a nice way to be, it’s a prerequisite to controlling your reality. The next step is recognizing your own fears, traumas, expectations, misconceptions, preconceptions, prejudices, and the like—anything your brain is doing automatically without you really thinking about it. No matter who you are, you believe what your brain tells you without even thinking about it, and you’re doing this thousands of times every day. Almost constantly.

A lot of people throughout history have found that one way to begin to alter your reality is through “mindfulness,” and one way to achieve that is through the widely misunderstood practice of meditation. Meditation is not religious and it is not thinking with your eyes closed. It is learning how to step back and train your consciousness to watch what your mind does. You don’t think anything, you pay attention to what your brain is thinking without your having asked it to. Eventually, this practice allows you to stop it from doing that and when that happens, you begin to experience moments very differently.

It’s a subtle skill, but one that can be quite amazing. If you’re new to it, the first thing you might realize is that your brain will not shut the F- up. Ever. At every waking moment of every day, it blabbers about everything and nothing without your asking it to AT ALL. Meditation is one way to help stop that. And once that constant static begins to be calmed, you may find that you can direct that powerful blob inside your boney melon in more productive directions.

Luckily, if you’d like to get started directing the powerful blob inside your boney melon in such a way, it’s as easy as just doing it. Our How to Meditate page is a great place to get started. (Just press play and follow along with the guided meditation found there.) The trickier part, of course, is sticking with your meditation practice. But Piraro’s got good advice there, too:

Like anything worthwhile, it takes time and practice. I’ve dabbled in this off and on for many years but have never been able to maintain a daily meditation practice for more than a few weeks. Last January, however, I began a daily practice that I’m still at more than six months later and although that still is not a very long time, I can personally testify that the difference is profound.

As just one small, practical example, for the first time in my life I can stop a musical ear worm. For half a century, I’ve been walking around with songs playing in my head almost constantly—usually ones I particularly dislike—and it has driven me crazy. I can shut those off now.

And that’s just the beginning. I also find that I’m not as annoyed by things—big or small. And I no longer regularly want to strangle imaginary strangers who disagree with my worldview. It has been and continues to be amazing. I just wanted to share that.