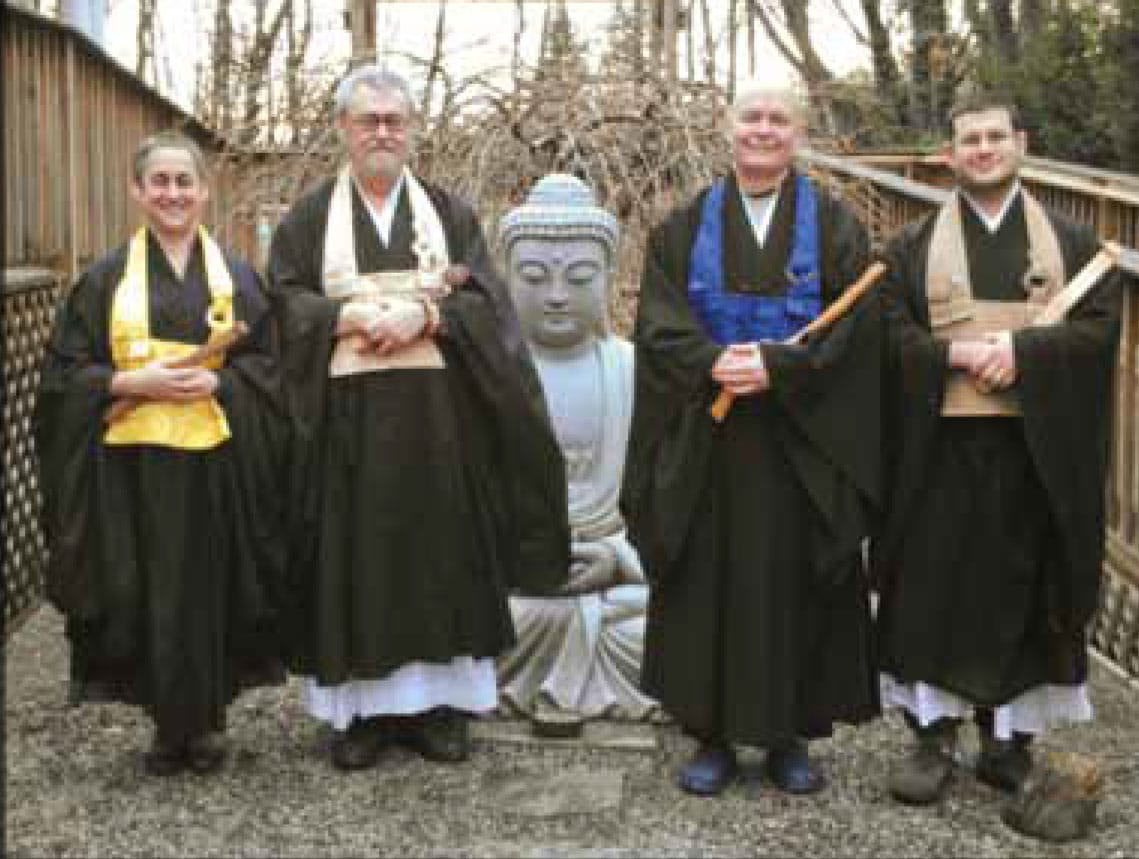 When asked about the challenges of teaching Zen, Josh Munen Bartok Sensei, one of the four guiding teachers of Boundless Way Zen (BWZ), recalls these rather severe lines from The Gateless Gate, a thirteenth-century koan collection compiled by the Chinese master Wumen. The teacher’s role has been a subject of particular interest for Boundless Way, a hybrid Zen school led by four teachers trained in different lineages. Taking seriously Wumen’s admonition, the leaders of Boundless Way decided that Zen teaching is a burden best shared and sought new means of carrying the iron yoke. Founded in 2002, Boundless Way is one of the fastest-growing Zen communities in the U.S., with more than two hundred regularly attending members and nine affiliated sanghas, mostly in New England. The Boundless Way Temple, founded in 2009 in Worcester, Massachusetts, hosts the sangha’s sesshin, held several times a year, as well as daily practice. Last year BWZ also opened a new dedicated practice space in Cambridge, Massachusetts. Boundless Way students generally train in both of the central Zen practices: shikantaza, or “just sitting,” and koan introspection. This blend is one of the marks of the group, whose guiding teachers are each lineage holders in more than one Zen tradition, representing between them Soto Zen, Korean Linji, and the Harada-Yasutani school, which combines elements of Soto and Rinzai.

Unlike in the more traditional single-teacher model, the four guiding teachers of Boundless Way are on equal footing, working collaboratively and sharing all aspects of leading the community. The catalyst for this arrangement was guiding teacher James Myoun Ford Roshi, who moved to the Boston area in 2000. Two of the other guiding teachers, Bartok and Melissa Myozen Blacker Roshi, became Ford’s students and were eventually authorized by him to teach. Both had been leading unaffiliated Zen groups nearby; Bartok in Somerville, Massachusetts, and Blacker with her husband, David Dae An Rynick Roshi, in Worcester. The idea for a new community was born when Ford and Blacker, already teaching together, invited Rynick to join them. The resonance between the three inspired deeper collaboration. Bartok became the fourth guiding teacher after receiving dharma transmission from Ford in 2012.

From these origins came a rethinking of how to structure a Zen community, from ordination to leadership roles, in order to best reflect and support the blended influences of BWZ. In this new teaching paradigm, the four guiding teachers lead retreats and give dharma talks together, forming a “sangha of teachers” that offers rich opportunities for teachers and students alike. “The challenge and fragility of what we’re doing is that the four of us have to continue to do the work of relationship,” Rynick says. These relationships create checks and balances among the teachers, as well as a framework of support.“One of the great things about teaching together,” Bartok explains, “is that we only have to say our part and then trust our co-teachers to come at it from a different way—to let the entirety of the dharma be expounded, without any one of us having to meet the unmeetable burden of doing it all.” Boundless Way students take one of the four teachers as their core guide but are expected to continue studying with the other three, which can mean having interviews with several teachers during the same day of a retreat. “Students working with particular practices will get a view from each teacher that’s a little bit different,” Blacker says. “It’s the student’s responsibility to take all that in and own it.”

This innovative approach aims to preserve the heart-to-heart transmission of the dharma from teacher to student in a manner that is healthy and sustainable.“It really avoids some of the pitfalls that we see in American dharma practice, where there’s one teacher who is put on a pedestal and almost dehumanized,” Blacker explains. In this co-teaching model, Ford says his growth as a teacher “has advanced much more rapidly than it could have if it were based exclusively on working with students in isolation.” He also sees another very positive aspect to the collaborative dynamic: “We believe this open and consciously equal communication deeply mitigates the likelihood of inappropriate infatuations, much less inappropriate interpersonal actions.”

Boundless Way encourages a very human, grounded approach to practice.“There’s definitely an emphasis on showing up as yourself, not as some idealized version of what a Zen student ought to look like or what a Zen teacher ought to be, and certainly not a simulacrum or clone of your teacher,” Bartok says. In fact, the list of requirements for ordination includes this stipulation: “The candidate must have fallen on their butt in public at least once. This may be accomplished literally or figuratively.” And among the teachers’ commitments outlined in BWZ’s code of ethics—a link to which appears on the home page of its website—is the pledge “to accept correction as generously as it may be offered.” The emphasis on one’s own humanity and ordinary life—as Ford puts it, “rubbing our noses in reality is the path”—is communicated to students in a variety of ways.

During retreats, sitting periods are broken into twenty-five-minute intervals—significantly shorter than the periods used in many Zen communities—in an effort to prevent meditative experience being taken as an end unto itself. “We regard retreats as essential and important, but the endeavor is not related to special states of mind attained on retreat,” Bartok says. “It’s about actualizing the precepts and the bodhisattva vows in the midst of our lives, and helping us meet the difficulties and pains of life with equanimity and skillfulness.” In the eyes of its guiding teachers, the experiment that grew into Boundless Way appears to be succeeding so far; the community continues to grow, and a foundation is being laid for the future of their particular flavor of Zen. “One of our most conscious aims is dharma leadership, nurturing voices in the sangha,” says Rynick, “So one of the most heartening things I see in Boundless Way is among our senior students—when they give dharma talks, they all sound like themselves.”