Music as a contemplative practice requires both the performer and the listener to pay close attention. Read culture critic Donald Brackett’s suggestions for meditative albums and listen to his playlist below. 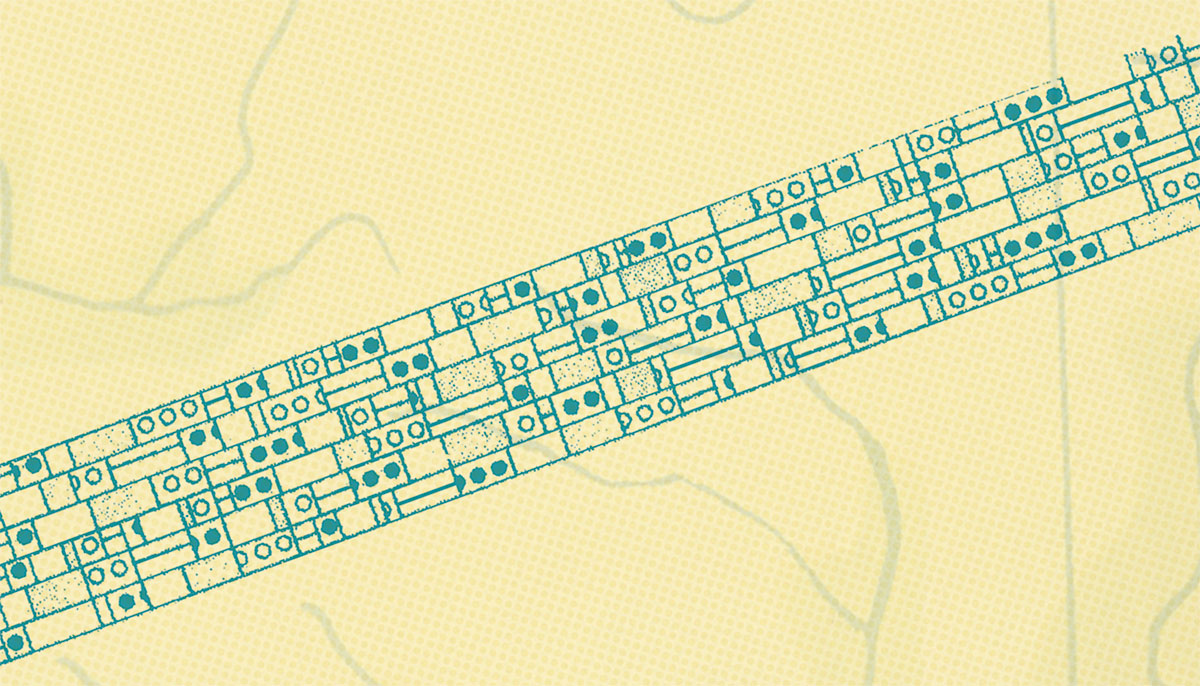 Composer Brian Eno created his own way of scoring music to capture elements that can’t be reflected in standard notation. Graphic scores from Music for Airports by Brian Eno.

“We ought to listen to music or sit and practice breathing at the beginning of every meeting or discussion.” —Thich Nhat Hanh

What kind of music, if any at all, serves the purpose of helping meditators establish equilibrium? Some teachers would suggest that music is a distraction, and perhaps it is, but it’s one that has a core place in my own practice.

My practice is a kind of beat hybrid of Zen and Dzogchen, and I use sound as an accompaniment to concentration on the breath, which is in itself a kind of reverberating music created by our own lungs. Putting on a piece of music to facilitate meditation also provides me with a set ritual within which I can briefly forget all limits.

I can personally testify that meditating … provides access to a zone of cognitive freedom that one can only characterize as dreaming with your eyes open.

The fact that certain modern composers use meditation techniques in their creative process—with or without a focus on specific religious content—has long been recognized. Many notable composers have also featured contemplative concepts in their artistic work.

Among the best known of such practitioners might be Zen adept John Cage, plus composers Stuart Dempster, Pauline Oliveros, Terry Riley, La Monte Young, R. Murray Schafer, and Karlheinz Stockhausen. Cage, in fact, described his works as meditations that measure the passing of time, and Stockhausen employed the attractive term intuitive music to characterize his orchestral direction that performers only play notes when they’re not thinking about their playing.

Some music expresses a sonic balance between East and West. Take American jazz clarinetist Tony Scott. He was a meditator who created the groundbreaking 1964 album Music for Zen Meditation, which is considered by many to be the very first New Age recording. This album featured Scott’s own improvisations on clarinet in conversation with master koto and shakuhachi musicians from Japan. The results were just as liberating as they were imaginative, and they still feel surprisingly fresh today.

But it was in 1975, with the release of Brian Eno’s Discreet Music, when the door was officially opened to the unique realm known as ambient music, a designation that for me best captures the essence of what meditative music might actually be and mean. Note, however, that this territory was also explored during the last years of the nineteenth century by the French iconoclast Erik Satie. He termed some of his majestically unadorned pieces furniture music, suggesting that the music is simply part of the room where it’s being played, like a chair or a table.

Oddly enough, Eno’s concept of discreet sounds came about as the result of an accident. When he was recuperating in a hospital from the injury, a friend brought in a turntable to play music in his room, but then left without realizing the volume was turned way down. Eno had something of a transformative experience when he continued listening to Pachelbel’s Canon at a barely audible level, which permitted him to also absorb the ambient sounds in his room and on the street outside. It was what I’m daring to call a moment of sonic satori.

Three years later, Eno consciously explored the ethereal realm he’d stumbled into with his groundbreaking meditative composition entitled Ambient 1: Music for Airports. A gentle bath of soft and drifting sounds, it appears to loop and overlap back and forth into and out of itself in a most mesmerizing manner. I can personally testify that meditating (not to it, or with it, but in it) provides access to a zone of cognitive freedom that one can only characterize as dreaming with your eyes open.

A recently released double-CD of largely solo piano music strikes me as being sonically pristine in exactly the same way, although it uses an entirely different approach. Not so much music for meditation as it is music as meditation, it creates a complex contemplative experience in a hauntingly simple setting: a woman sitting at a piano, one whose breath seemingly comes in and out of her fingertips.

Music as a contemplative tool requires, of both its performer and listener, the utmost attention to attention.

In this recording, Japanese pianist Yoshiko Shimizu plays George Crumb’s Makrokosmos, Volume I, Volume II, and Music for a Summer Evening (Makrokosmos III) accompanied by Austrian percussionist Rupert Struber. Crumb’s Makrokosmos sequence is filled with references to the religious history of humankind; archetypal myths, Gnostic Christianity, the buddhadharma, nature-based paganism, and even a subtle occultism all find a home in his compositions. In the same way Béla Bartók recapitulated classical values in the context of a modernist ethos, Crumb reorders modernist myths within a stringently archaic drama.

Like his contemporary and peer John Cage, Crumb takes silence as the origin and starting point for all sound. From the moment you place the Crumb CD in its chamber and hit play, there is very little else to do but meditate, in whatever shape or form you might choose to define it. His music occupies the space and time in which you hear it in a manner that Erik Satie would have adored. It’s there, but then again it isn’t. It’s everywhere. Pianist Yoshiko Shimizu manages to extract a here and now-ness, the wow of a very long now, from the cadence and cascade that Crumb invites us to experience. Indeed, it’s meditative music, which measures, as Cage put it, the passing of time.

Recently, the intersections between the pop, electronic, synth, and world music categories have produced a new wave of meditative music that eliminates boundaries between genres. This fresh crop of experimental musicians includes Robert Fripp and Harold Budd, who were both early collaborators with Brian Eno. Notably, there are Budd’s shimmering sounds on After the Night Falls (2007) and Fripp’s excursions with fellow ambient master Theo Travis on their perfectly titled The Silence Beneath (2008).

Another gifted sonic meditator is David Sylvian, ex­–front man of Japan. In his post-pop incarnations, he’s had magical partnerships with Holger Czukay and others. With Franz Wright and Christian Fennesz, he created the exquisite album There’s a Light that Enters Houses with No Other Houses in Sight (2014). Equally rewarding is the remarkably ethereal duo-band Dead Can Dance, which re-formed to release Anastasis (2012) and Dionysus (2018). The experimentation with hybrid styles and inspiring ethos that commenced so long ago with Tony Scott continues today.

Music as a contemplative tool requires, of both its performer and listener, the utmost attention to attention. It’s music that detaches us from over-thinking and reconnects us to life. As that great accidental Buddhist Albert Einstein put it: “Life is like a piano: what you get out of it depends on how you play it.”

Donald Brackett is the author of Tumult!: The Incredible Like and Music of Tina Turner and Back to Black: Amy Winehouse's Only Masterpiece.