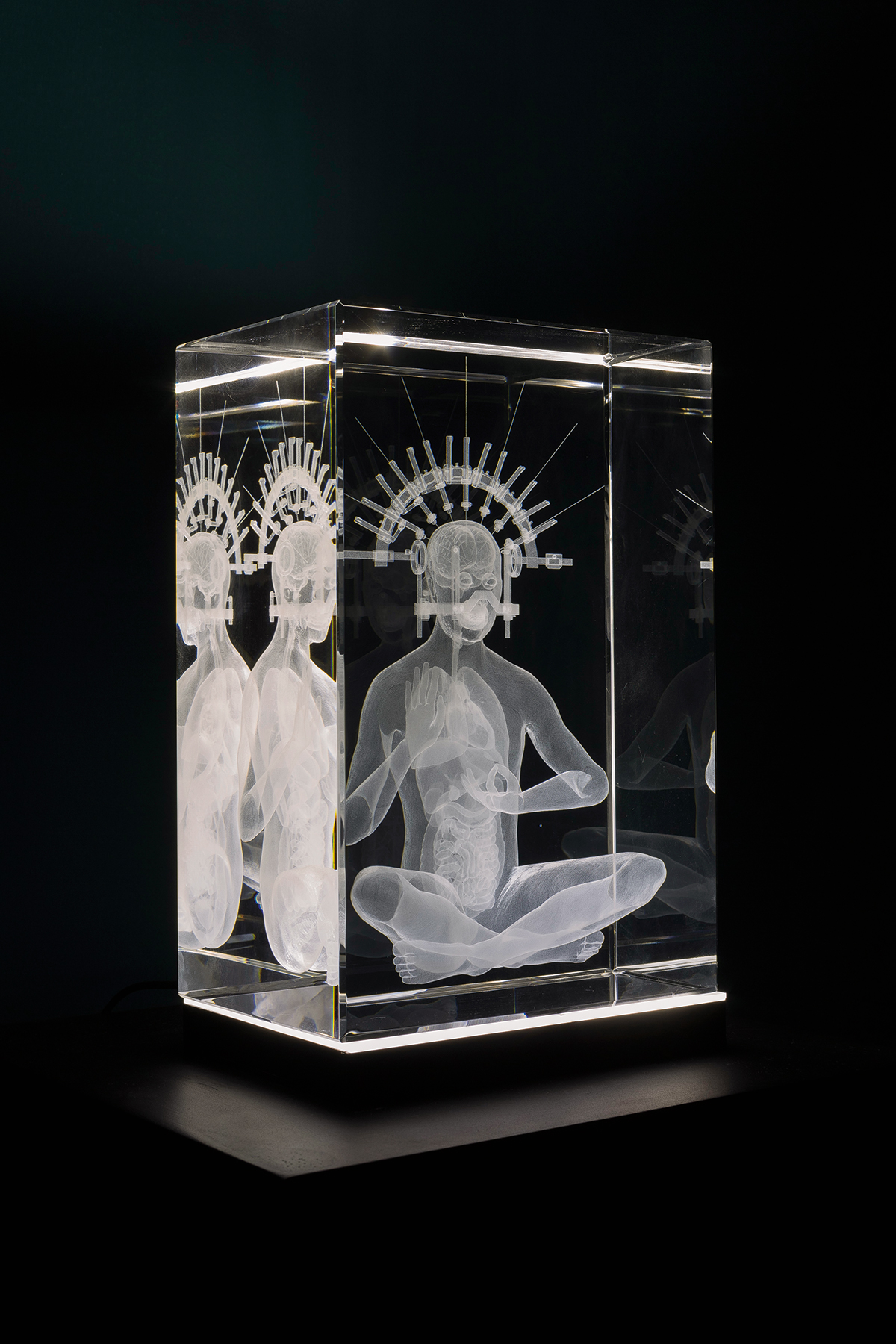 In 2015, during his opening remarks at the Mind & Life Dialogue at Sera Monastery in south India, the Fourteenth Dalai Lama remarked that the dialogue was not between Buddhism and science, but rather between “Buddhist science and modern science.” With this slight rhetorical gesture, likely unnoticed by most in the audience, the Dalai Lama reframed the dialogue between Buddhism and science.

The phrase “Buddhist science” is a neologism that was coined from this context and is not part of the classical Tibetan Buddhist lexicon. As the Dalai Lama explains in his introduction to the newly published Science and Philosophy in Indian and Buddhist Classics, Volume 2, he distinguishes three distinct domains within Buddhism: science, philosophy, and religious practice. This volume, the second in a four-volume series, anthologizes the discussion around Buddhist science. The purpose of these volumes is to extract the scientific and philosophical ideas from Indian Buddhist source literature and present them independently from Buddhist religion. The first volume (2017) was on the physical world and included chapters on sense objects, atomic particles, time, planetary motions, the brain, and fetal development (see Michel Bitbol’s review in the spring 2018 issue of Buddhadharma). This second volume is dedicated to topics on the mind, and includes chapters on mental factors, the subtle mind in tantra, reasoning and inferential knowing, and training the mind through meditation.

The aim of this project is not to secularize Buddhism, but rather by selecting Buddhist canonical writings with empirical claims, to include Buddhism within an expansive vision of science.

The multivolume anthology to which this volume belongs was conceived by the Dalai Lama to bring together select texts in translation from the Tengyur, the Tibetan language canonical collection of Indian Buddhist writings. While the volumes on the physical world and mind comprise texts that represent scientific presentations, the forthcoming two volumes will represent philosophical works from Indian Buddhist authors. The project is an astonishing feat of collaboration that involved the efforts of many minds. Under the direction of the Dalai Lama, a team of Tibetan scholars selected important passages from the canon and wrote essays in Tibetan that interwove these key passages into coherent chapters. This Tibetan language volume, which was published separately in India, was then translated into English by Dechen Rochard. For each part, John Dunne wrote an essay to contextualize main concepts and bring these ideas into conversation with contemporary thought, particularly the cognitive sciences. The translation was further refined by Dunne, particularly the part on Buddhist epistemology, and the entire project is being edited by Thupten Jinpa.

This book is not about what the Dalai Lama calls “Buddhist business.” By that he means those topics that are not empirically detected and are therefore off the table for discussion with scientists—karma, rebirth, enlightenment, and so forth. One explicit purpose of this project is to extract content that can be empirically verified, and in so doing, to redact content that cannot be empirically verified. By asserting that Buddhism is scientific, this sets the stage to even the playing field with scientists on empirical grounds. This process also raises critical questions about how viable it is to extract ideas from their Buddhist contexts. For instance, to fully understand the operations of subtle consciousness at the moment of death is not merely dependent on scientific instruments of empirical detection but requires knowledge of the metaphysical, ritual, cosmological, and cultural contexts from which these experiences of consciousness are described. To not consider the broader contexts is to risk throwing the buddha out with the bathwater.

The aim of this project is not to secularize Buddhism, an objective of other projects, but rather by selecting Buddhist canonical writings with empirical claims, to include Buddhism within an expansive vision of science. This volume seeks to broaden the scope of science by articulating a Buddhist science of mind that includes the living experience of the inquirer or observer. Unlike the science of the physical world, to which the first volume is dedicated, a goal of this second volume is to enrich modern science with more nuanced and detailed understandings of the mind derived from Buddhist sources. What is meant by “science” in these volumes is not limited to the normative Euro-American science that began in Greece and culminated in the European Renaissance but rather spans global eras, regions, and cultures. This broad vision of science encompasses knowledge about the principles or laws that govern the natural world and is, in fact, resonant with intuitions of the early naturalists from which modern science emerged. More specifically, the project delves into the textual record to make a case for a certain kind of scientific Buddhist knowledge that was produced in India from the sixth through the ninth centuries CE.

This volume is divided into six parts on (1) the nature of mind; (2) mental factors; (3) subtle degrees of mind; (4) objects of cognition; (5) inference from Buddhist epistemology; and (6) training the mind through meditation. The first part on the nature of mind clarifies the Buddhist distinction between sense consciousness and mental consciousness. Each of the five sense consciousnesses depends on one of the five bodily sense faculties, including the eye, ear, nose, and so forth, while mental consciousness is not dependent on a physical sense faculty.

Given that consciousness is qualitatively different than physical objects, and Buddhism proposes consciousness to be subject to natural laws, the authors go into detail about the conditions necessary for either sense consciousness or mental consciousness to arise. Within this presentation of conditions, the case is made for a proof of past and future lives based on the logic of a continuum of consciousness—thereby making a bold attempt to put the Buddhist business of rebirth back on the table. In this same section on the nature of the mind, the discussion on the difference between conceptual and nonconceptual is limited to Dharmakirti’s Exposition on Valid Cognition and does not consider the nonconceptual according to the Buddhist tantras. The next part on mental factors—that is, events in the life of the mind—is a synopsis of categories from the Abhi-dharma literature.

The shortest chapter in the volume, and the only section that deviates from a discussion of ordinary gross levels of cognition, is on the subtle degrees of mind. This is also the only part that derives content from the Buddhist tantras, in this case from the so-called Highest Yoga Tantra (or Anuttarayogatantra, a term unattested in Sanskrit that Tibetans employ), albeit passages are largely from the Guhyasamaja Tantra and its commentaries. There is a brief presentation of the subtlety of mind across waking, dreaming, and dreamless sleep states as well as the clear light at the time of death.

Though subtle body theory is not discussed in depth, the chapter on the subtle winds, or lung, details a Buddhist tantric understanding of these subtle energetic movements in relationship with the mind and body. The extremely subtle wind is no different from the extremely subtle mind—the two are mixed inseparably, like “butter poured into butter.” This understanding of the functions and stages of the winds, particularly winds dissolving into clear light at death, are important not only for Buddhist practitioners, but also prospectively for science. For instance, neuroscience and pulmonary science could possibly benefit from Buddhist tantric descriptions of the subtle workings of the body, including breath and the nervous system.

To demonstrate a Buddhist emphasis on direct experience, the volume dedicates two parts to the importance of reasoning. These sections on the objects of cognition and inferential reasoning derive from Indian Buddhist epistemology, largely from Dharmakirti’s writings but also from Dignaga’s Drum of a Wheel of Reasons, which details categories of inferential evidence. From the Buddhist perspective, these writings establish knowledge based on direct experience as opposed to inferential or conceptual cognition. While these chapters are less relevant for scientific research, they serve the project by demonstrating a Buddhist commitment to observation and analysis based on reason. 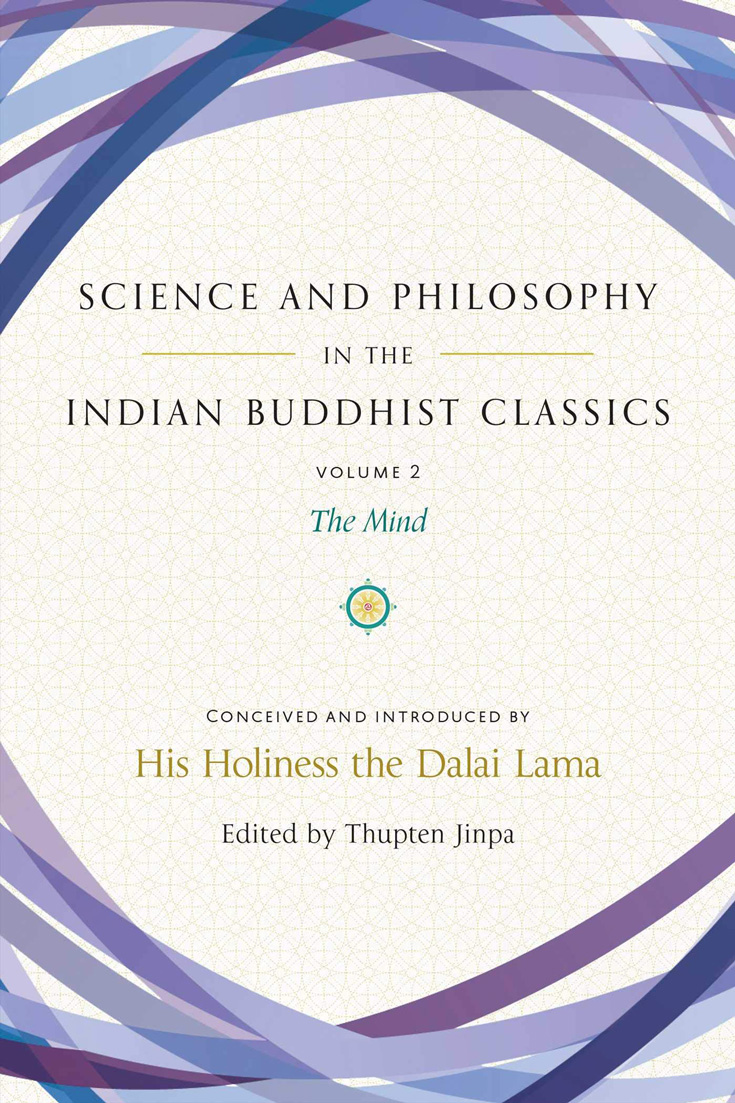 “Science and Philosophy in Indian and Buddhist Classics, Vol. 2: The Mind”
Conceived and introduced by His Holiness the Dalai Lama, with essays by John D. Dunne
edited by Thubten Jinpa; translation by Dechen Rochard
Wisdom Publications, 2020
576 pages; $29.95

To date, Buddhist meditation is the area of greatest overlap with scientific research. While much of the volume describes Buddhist reasoning and operations of mind, the part on meditation details practices to train the mind. After a chapter on the conditions and outlooks for meditation, there are chapters on calm abiding or shamatha meditation, the four foundations of mindfulness, and the eight worldly concerns. The chapter on calm abiding meditation is especially practical, providing explicit instructions on how to practice based on canonical sources. The chapter on mindfulness is interesting because it combines passages from the Sutta on the Applications of Mindfulness, found in the Pali canon, with passages from Indian Buddhism found in the Tibetan canon. Discussion on the operations of mindfulness, meta-awareness, and attention are particularly relevant to the current science of meditation. Including meditation in this volume, however, serves another purpose, not only to inform contemporary science but also to assert that empirical observation includes observations derived from meditation. This view is at the heart of a Buddhist science of mind.

All of the passages, with a few exceptions from the Pali canon on mindfulness, are translations drawn from texts in the Tibetan Buddhist canon. There is no inclusion of Indic original texts or Sanskrit sources in translation from the East Asian canon. This constrains this volume to Indian works through the lens of Tibetan Buddhism. Even more, passages selected are from Indian works favored by the Geluk order. For instance, there is no representation of Indian sources for Dzogchen or Mahamudra understandings of nondual awareness. Even given the constraints of drawing from Tibetan sources, the project would have benefited from presenting a greater diversity of canonical sources from Indian Buddhism—particularly from the tantras and related texts that integrate medical and contemplative understandings of mind and body.

Readers should keep in mind that this series on science and philosophy from Indian Buddhist works is the product of a very particular project: the current Buddhism and science dialogue. This volume is not a history of science, nor does it attempt to analyze or provide contexts for the knowledge that it presents. On one hand, it provides content that argues for a Buddhist science of mind, and on the other, it informs empirically minded readers about Buddhist contributions to understanding the life of the mind. Because the translation is clear and accessible, and the introductory essays for each part provide necessary context, this volume serves as a helpful roadmap in the dialogue between Buddhism, cultural psychology, and the cognitive sciences.