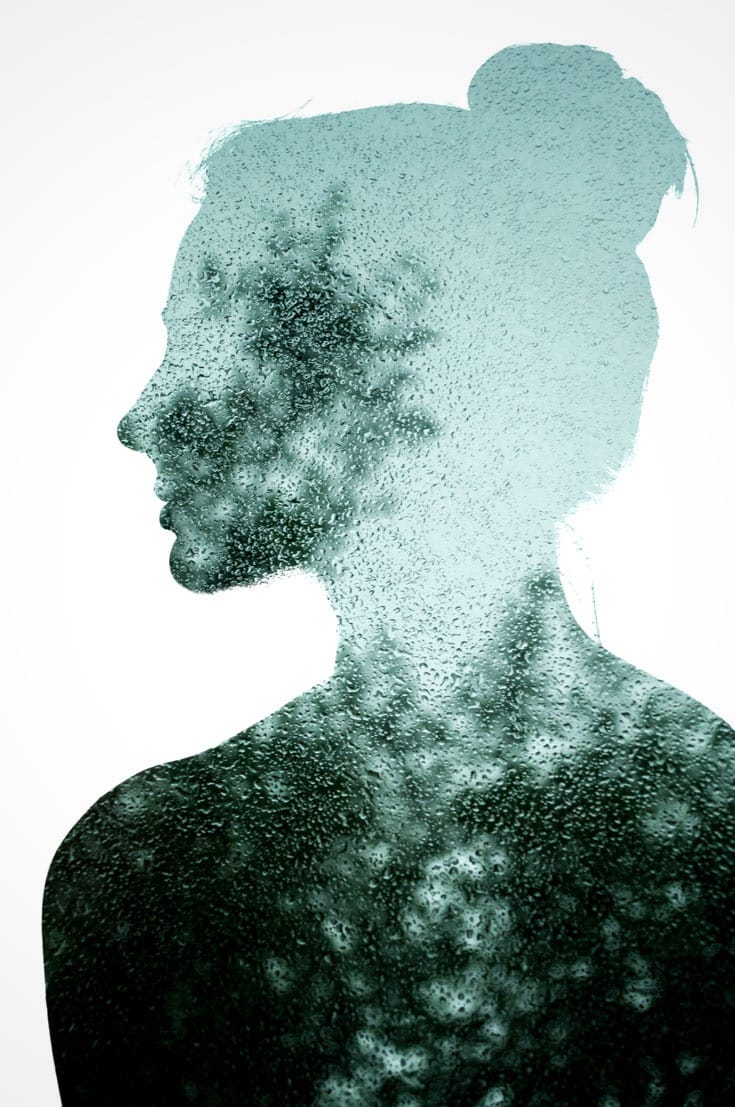 “When you say the rain is falling, it’s very funny, because if it weren’t falling, it wouldn’t be rain.” Photo by Lacie Slezak.

Abhidharma, Buddhism’s map of the mind, is sometimes treated as a topic of merely intellectual interest. In fact, says Thich Nhat Hanh, identifying the different elements of consciousness, and understanding how they interact, is essential to our practice of meditation.

Mindfulness keeps us in the present moment and allows our mind consciousness to relax and let go of the energy of worrying about the past or predicting the future.

The second level of consciousness is sense consciousness, the consciousness that comes from our five senses: sight, hearing, taste, touch, and smell. We sometimes call these senses “gates,” or “doors,” because all objects of perception enter consciousness through our sensory contact with them. Sense consciousness always involves three elements: first, the sense organ (eyes, ears, nose, tongue, or body); second, the sense object itself (the object we’re smelling or the sound we’re hearing); and finally, our experience of what we are seeing, hearing, smelling, tasting, or touching.

Store consciousness is like a museum. A museum can only be called a museum when there are things in it. When there is nothing in it, you can call it a building, but not a museum. The conservator is the one who is responsible for the museum. Her function is to keep the various objects preserved and not allow them to be stolen. But there must be things to be stored, things to be kept. Store consciousness refers to the storing and also to what is stored—that is, all the information from the past, from our ancestors, and all the information received from the other consciousnesses. In Buddhist tradition, this information is stored as bija, seeds.

When we go into a department store and look for a hat or a shirt, we have the impression, while looking at the items displayed, that we have free will and that, finances permitting, we are free to choose whatever we want. If the vendor asks us what we like, we can point to or verbalize the object of our desire. And we likely have the impression that we are free people at this moment, using our mind consciousness to select things that we like. But that is an illusion. Everything has been decided already in store consciousness. At that moment we are caught; we are not free people. Our sense of beauty, our sense of liking or disliking, has been decided very certainly and very discreetly on the level of store consciousness.

The value of the dollar is made up of the collective thinking of people, not just of objective economic elements. People’s fears, desires, and expectations make the dollar go up and go down. We are influenced by the collective ways of seeing and thinking. That’s why selecting the people you are around is very important. It’s very important to surround yourself with people who have loving-kindness, understanding, and compassion, because day and night we are influenced by the collective consciousness.

Another way of thinking of manas is as adana consciousness. Adana means “appropriation.” Imagine that a vine puts forth a shoot, and then the shoot turns back and embraces and encircles the trunk of the tree. This deep-seated delusion—the belief that there is a self—is there in store consciousness as the result of ignorance and fear, and it gives rise to an energy that turns around and embraces store consciousness and makes it the only object of its love.

The word “formation” (samskara in Sanskrit) means something that manifests when many conditions come together. When we look at a flower, we can recognize many of the elements that have come together to make the flower manifest in that form. We know that without the rain there can be no water and the flower cannot manifest. And we see that the sunshine is also there. The earth, the compost, the gardener, time, space, and many elements came together to help this flower manifest. The flower doesn’t have a separate existence; it’s a formation. The sun, the moon, the mountain, and the river are all formations. Using the word “formation” reminds us that there is no separate core of existence in them. There is only a coming together of many, many conditions for something to manifest.

When Descartes said, “I think, therefore I am,” his point was that if I think, there must be an “I” for thinking to be possible.

As Buddhist practitioners, we can train ourselves to look at everything as a formation. We know that all formations are changing all the time. Impermanence is one of the marks of reality, because everything changes.

If the impression is weak, then the vibration stops and the current of store consciousness recovers its tranquility; you continue to sleep or you continue with your activities, because that impression created by touch has not been strong enough to draw the attention of mind consciousnesses. It’s like when a flying insect lands on the surface of the water and causes the water to ripple a little bit. After the insect flies off, the surface of the water becomes completely calm again. So although the mental formation manifests, although the current of the life continuum vibrates, there’s no awareness born in mind consciousness because the impression is too weak.

Without mental formations, there can’t be consciousness. It’s as if we’re discussing a formation of birds. The formation holds the birds together, and they fly beautifully in the sky. You don’t need someone to hold the birds and keep them flying in one formation. You don’t need a self to create the formation. The birds just do it. In a beehive, you don’t need someone who gives the order for this bee to go left and that bee to go right; they just communicate among one another and are a beehive. Among all the bees, every bee may have a different responsibility, but no bee claims to be the boss of all the bees, not even the queen. The queen is not the boss. Her function is simply to give birth to the eggs. If you have a good community, a good sangha, it’s like this beehive in which all the parts make up the whole, with no leader, no boss.

When we say it’s raining, we mean that raining is taking place. You don’t need someone up above to perform the raining. It’s not that there is the rain, and there is the one who causes the rain to fall. In fact, when you say the rain is falling, it’s very funny, because if it weren’t falling, it wouldn’t be rain. In our way of speaking, we’re used to having a subject and a verb. That’s why we need the word “it” when we say, “it rains.” “It” is the subject, the one who makes the rain possible. But, looking deeply, we don’t need a “rainer,” we just need the rain. Raining and the rain are the same. The formation of birds and the birds are the same—there’s no “self,” no boss involved.

There’s a mental formation called vitarka, “thinking.” When we use the verb “to think” in English, we need a subject of the verb: I think, you think, he thinks. But, really, you don’t need a subject for a thought to be produced. Thinking without thinker—it’s absolutely possible. To think is to think about something. To perceive is to perceive something. The perceiver and the object that is perceived are one.

When Descartes said, “I think, therefore I am,” his point was that if I think, there must be an “I” for thinking to be possible. When he made the declaration “I think,” he believed that he could demonstrate that the “I” exists. We have the strong habit of believing in a self. But, observing very deeply, we can see that a thought does not need a thinker to be possible. There is no thinker behind the thinking—there is just the thinking; that’s enough.

Now, if Mr. Descartes were here, we might ask him, “Monsieur Descartes, you say, ‘You think, therefore you are.’ But what are you? You are your thinking. Thinking—that’s enough. Thinking manifests without the need of a self behind it.”

Thinking without a thinker. Feeling without a feeler. What is our anger without our “self”? This is the object of our meditation. All the fifty-one mental formations take place and manifest without a self behind them that’s arranging for this to appear, and then for that to appear. Our mind consciousness is in the habit of basing itself on the idea of self, on manas. But we can meditate to be more aware of our store consciousness, where we keep the seeds of all those mental formations that are not currently manifesting in our mind.

When we meditate, we practice looking deeply in order to bring light and clarity into our way of seeing things. When the vision of no-self is obtained, our delusion is removed. This is what we call transformation. In the Buddhist tradition, transformation is possible with deep understanding. The moment the vision of no-self is there, manas, the elusive notion of “I am,” disintegrates, and we find ourselves enjoying, in this very moment, freedom and happiness.