Pure Land is both a distinct school of Buddhism that developed in Japan and, says Aaron Proffitt, a cornerstone of the whole Mahayana tradition. 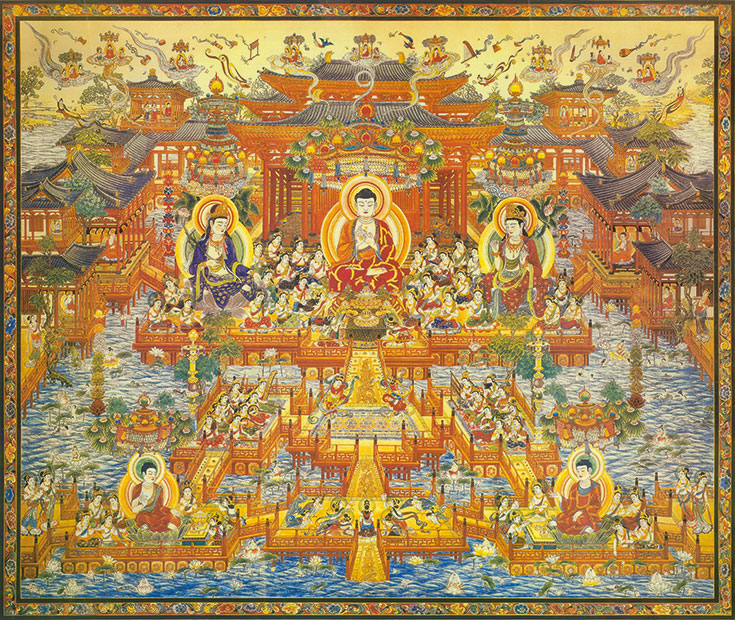 A modern painting of Sukhavati, the pure land that’s associated in Mahayana Buddhism with the buddha Amitabha, known in Japanese as Amida.

Early Orientalist scholars of Buddhism working under colonialism had little interest in the diversity and vitality of living Buddhist cultures. Instead, they cherry-picked the Buddhist teachings to fit their own modernist, Protestant worldview.

This ahistorical perspective on Buddhism—a “Buddhism” created by and for European intellectuals—was then used to criticize living Buddhist cultures. These scholars believed that Mahayana Buddhism in general, but especially the Pure Land teachings, were a perverse distortion of the buddhadharma (as they defined it).

Sadly, this attitude is still widely seen. Pure Land Buddhism is arguably the most commonly practiced form of Buddhism in the world. Yet in English-language academic and popular writing it is largely ignored, or wholly misunderstood.

The Pure Land teachings are fundamental to Mahayana philosophy, ritual, meditation, art, and scripture. Generally, we could think of Mahayana Buddhism itself as a “Buddhism of the Pure Lands.” More specifically, the term “Pure Land Buddhism” also refers to a distinct form or school of Buddhism that developed in Japan. While drawing on the general Pure Land teachings in Mahayana Buddhism, this school focuses particularly on contemplation of the Pure Land named Sukhavati (Land of Bliss) and the Buddha of that land, Amitabha.

While some Mahayana Buddhists may aspire to be reborn in the Pure Land in the next life, others conceive of the Pure Land as a symbol for nirvana that is in some sense present within this world. Others may hold both positions at the same time. As the Contemplation Sutra says, “the mind that creates the Buddha is the Buddha.” 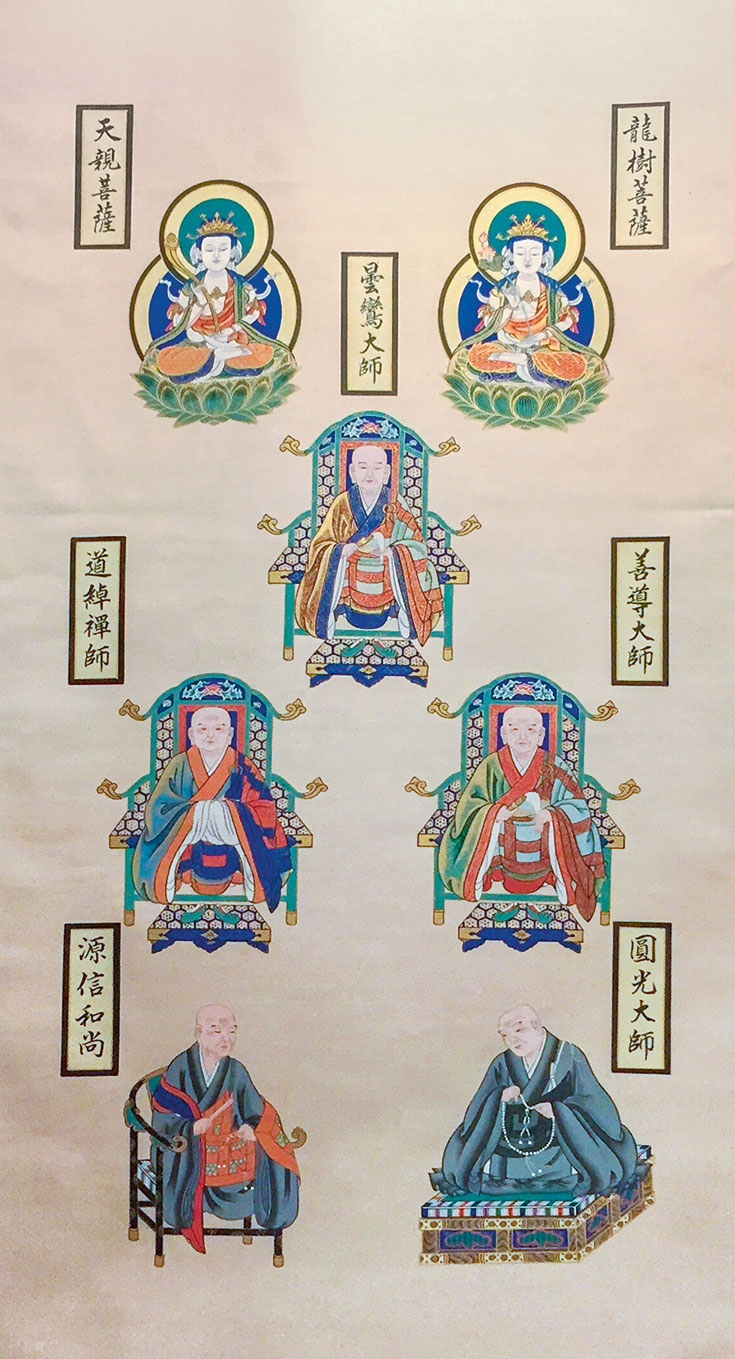 Today we divide the Buddhist world into Theravada and Mahayana, yet this division wasn’t always so clear-cut. Many elements we now identify as Mahayana or Theravada or tantra developed gradually within diverse early Indian cultural contexts in the period 500 BCE–100 CE, before the sutras we now have access to were written down.

For the most part, the texts written in the literary language known as Pali, which today we associate with Theravada Buddhism, preserve a worldview that suggests only one buddha may exist at a time. But the body of sutras we now label as Mahayana offer diverse perspectives on the nature of buddhahood and the path to awakening.

Buddhists of all schools agree that Shakyamuni Buddha taught about buddhas of the past and future, but within Mahayana sutras and tantras, it’s believed the Buddha also taught about other buddhas of this age, such as Akshobhya, Vairocana, and Amitabha.

Sukhavati and Amitabha appear to have been very popular when Mahayana texts were written down, as they’re mentioned in literally hundreds of Mahayana sutras and tantras. Later treatises dealing with the Pure Land teachings are attributed to great Indian masters such as Nagarjuna (circa 150–250 CE) and Vasubandhu (fourth–fifth century CE). 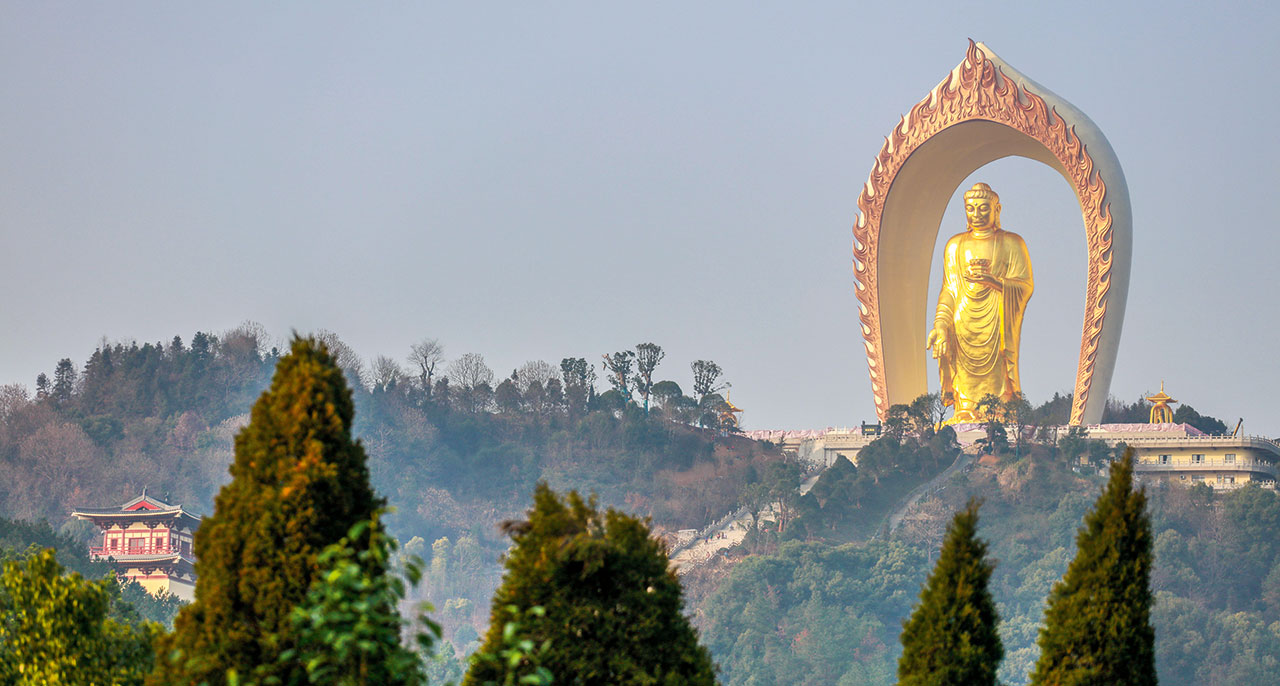 A statue of Amitabha at Donglin Temple at the foot of China’s Mount Lu. The temple was founded by the Pure Land patriarch Huiyuan. Photo by Imaginechina Limited / Alamy Stock Photo

Buddhism was transmitted along trade routes throughout South and Central Asia, and by the first century of the Common Era it began taking root in China. Mahayana Buddhism was particularly embraced, and as the Pure Land teachings are a fundamental aspect of Mahayana philosophy and practice, diverse perspectives on the pure lands flourished in China early on.

Born in Gandhara in 147 CE, the monk Lokaksema translated Sanskrit Mahayana texts into Chinese, including the Pratyutpanna Samadhi Sutra (the Sutra on the Samadhi for Encountering Face-Face the Buddhas of the Present). The Pratyutpanna Samadhi Sutra was particularly influential upon the monk Huiyuan (334–416), whom later generations recognized as the first Pure Land patriarch.

Huiyuan organized Pure Land practice societies, referred to as White Lotus Societies, whose practitioners contemplated Amitabha Buddha in order to receive mystical visions of him. This inspired later forms of communal Pure Land practice. Like most other Chinese Buddhist masters, Huiyuan was also conversant in Daoist and Confucian thought. He’s famous for rebuking a local warlord by declaring “monks do not revere kings.”

Zhiyi (538–597) of Mount Tiantai in Zhejiang, China, is regarded as the founder of the Tiantai tradition, which offered an indigenous Chinese approach to Indian Buddhism. Zhiyi revered Nagarjuna’s teachings on emptiness, and offered a comprehensive understanding of Buddhist doctrine and meditation that ended up influencing the whole of East Asian Buddhism.

Zhiyi’s perspective on Pure Land practice also drew upon the Pratyutpanna Samadhi Sutra, recommending recitation of the name of Amitabha as a way of staying focused during meditation. Some of the most influential Pure Land teachers in East Asian history were associated with the Tiantai lineage, known as Cheontae in Korea and Tendai in Japan.

The works of Shandao (613–681) represent another important strand of East Asian Pure Land Buddhist thought. Shandao was revered for his visionary experiences and meditative prowess. What distinguishes Shandao was his revolutionary teaching that Pure Land practices can help even ordinary beings attain rebirth in the Pure Land, and thus awakening. This was in contrast to the elite view that Pure Land rebirth was only possible for highly accomplished bodhisattvas.

Tibetan Buddhism developed later than East Asian Buddhism, so it was able to draw upon the full range of Indian Buddhist texts. Eventually the tantras were emphasized. While we may often associate the tantras with the rapid attainment of buddhahood in this body and world, many tantras are said to lead to rebirth in the pure lands, especially Sukhavati.

The Pure Land tradition has manifested in myriad ways in Tibetan Buddhism. Padmasambhava (circa eighth–ninth century) was a great tantric teacher in Tibet who came to be recognized as an incarnation of Amitabha Buddha; the Tibetan lineage of reincarnated tulkus known as the Panchen Lamas are said to be emanations of Amitabha. A Tibetan ritual known as phowa involves practitioners ejecting their consciousness out the top of their heads and into Sukhavati. One of the most important mantras in Tibetan Buddhism is that of Avalokiteshvara, “Om Mani Padme Hum,” which is said to lead to rebirth in Sukhavati. 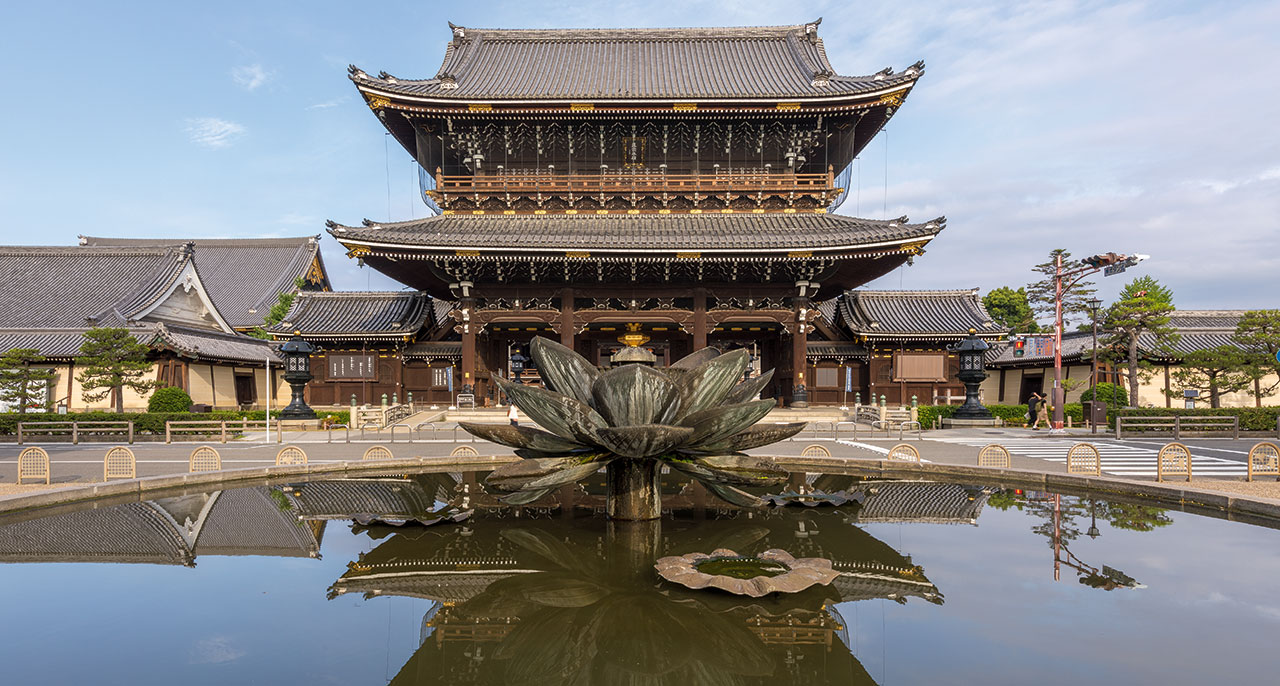 Higashi-Honganji in Kyoto is one of the head temples of the Shin sect of Pure Land Buddhism. Shinran’s ashes are in a mausoleum on the temple’s grounds. Photo by Basile Morin

The Japanese monk Eon was a scholar of Nagarjuna’s Madhyamaka (Middle Way) philosophy who traveled to China in 608 CE. Upon his return to Japan over thirty years later, he chose the Pure Land teachings as the subject of his first lecture.

Japanese monks associated with the Mount Hiei Tendai tradition, such as Ennin (794–864) and Genshin (942–1017), promoted Tendai philosophy, esoteric ritual, and the practice of nembutsu (Pure Land contemplation and the recitation of Amitabha Buddha’s name). Wandering ascetics such as Kuya (903–972) traveled between mountain monastic centers and the marketplace to share Pure Land teachings with the common people.

Kakuban (1095–1143), and later Dohan (1179–1252), drew upon the esoteric understanding of mantra and promoted the idea that Amitabha Buddha is best understood as the breath of life of all beings and that Pure Land “rebirth” is the same as attaining buddhahood in this very body.

In the twelfth and thirteenth centuries, the rising power of the samurai class sent Japan into chaos. In response to this social upheaval, an egalitarian approach to Buddhism emerged that emphasized the Pure Land path as open to ordinary people, not just those engaged in elite monastic practice. The medieval Japanese Pure Land schools tended to emphasize the Pure Land path almost to the exclusion of practices such as scholasticism, Zen meditation, and esoteric ritual, while at the same time drawing upon the philosophical insights that arose from those traditions.

Honen (1133–1212) is the great revolutionary of Japanese Pure Land history. Drawing on his broad erudition in Mahayana philosophy and practice, and the works of Shandao in particular, Honen sought the teaching that would be most effective for people living in this age of chaos and anxiety. Eventually, Honen came to see the recitation of the name of Amitabha, “Namu Amida Butsu,” as the essential practice.

Because this simple practice is possible for all people, regardless of gender or social station, it exemplifies the universal compassion and wisdom of Amitabha Buddha. Honen inspired a movement that, though persecuted by the powers that be, ended up transforming Japanese Buddhism by creating a “Buddhism of the Pure Land.”
Honen’s disciple Shinran (1173–1263) referred to himself as a “stubble headed dummy,” and claimed to not even have one student. Yet the Jodo Shinshu lineage that looks to him as its founder is the largest school of Buddhism in Japan and one of the oldest and largest in the Americas as well, making him one of the most influential Buddhist thinkers in world history.

Shinran argued that progress along the path, Pure Land rebirth, and the attainment of awakening occur not through one’s own efforts alone. Rather, Amitabha Buddha is the dynamic force to which beings spontaneously awaken through a radical letting go—an experience known as shinjin, “the mind of confidence” or “awakening.”

Women have played an important role in Pure Land Buddhism, and Shinran owed his success in many ways to the women in his life. Without his wife, Eshinni, who supported his ministry, and his daughter Kakushinni, who built a mausoleum dedicated to him, Shinran likely would have been little more than an historical footnote.

Although Pure Land Buddhism remains understudied and poorly understood in the English-speaking world, scholars and practitioners today are building new bridges with other Buddhist schools and helping people understand what Pure Land Buddhism really is. In time, the profundity and diversity of the Pure Land tradition will become apparent.

Aaron Proffitt is an assistant professor of Japanese studies at the University at Albany-SUNY. His book Esoteric Pure Land Buddhism will be published in September by University of Hawaii Press.