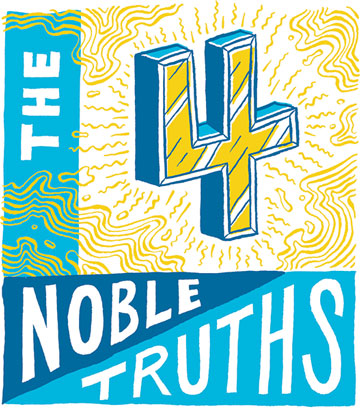 What are the four noble truths? Buddhism’s famed four truths are called noble because they liberate us from suffering. They are the Buddha’s basic teaching, encapsulating the entire Buddhist path.

Life always involves suffering, in obvious and subtle forms. Even when things seem good, we always feel an undercurrent of anxiety and uncertainty inside.

2. The Cause of Suffering

The cause of suffering is craving and fundamental ignorance. We suffer because of our mistaken belief that we are a separate, independent, solid “I.” The painful and futile struggle to maintain this delusion of ego is known as samsara, or cyclic existence.

3. The End of Suffering

The good news is that our obscurations are temporary. They are like passing clouds that obscure the sun of our enlightened nature, which is always present. Therefore, suffering can end because our obscurations can be purified and awakened mind is always available to us.

By living ethically, practicing meditation, and developing wisdom, we can take exactly the same journey to enlightenment and freedom from suffering that the buddhas do. We too can wake up.

The Message of the Buddha’s Four Noble Truths

In short, it’s that paying attention and seeing clearly lead to behaving impeccably in every moment, out of love, and on behalf of all beings. Sylvia Boorstein explains.

The Buddha laid out a four-step path to freedom from difficult emotions. The secret, says Anyen Rinpoche, is understanding why our emotions cause us so much suffering. Once we know that, the path to freedom becomes clear.

Tulku Thondup on the four simple and practical statements that encompass the entire Buddhist path, the Buddha’s Four Noble Truths.

Ten Buddhist teachers explain the first noble truth — the Buddha’s first teaching — and why it’s not a condemnation, but a joyous opportunity.

Deer to the Heart

They were present at the Buddha’s first sermon, and, reportedly, they listened. Andrea Miller reexamines something we all might have missed in the meaning of the quiet, watchful deer.