Devaduta is Pali for “divine messengers.” It is said that the Buddha embarked on his quest for enlightenment after encountering three devadutas: a sick person, an old man, and a corpse. 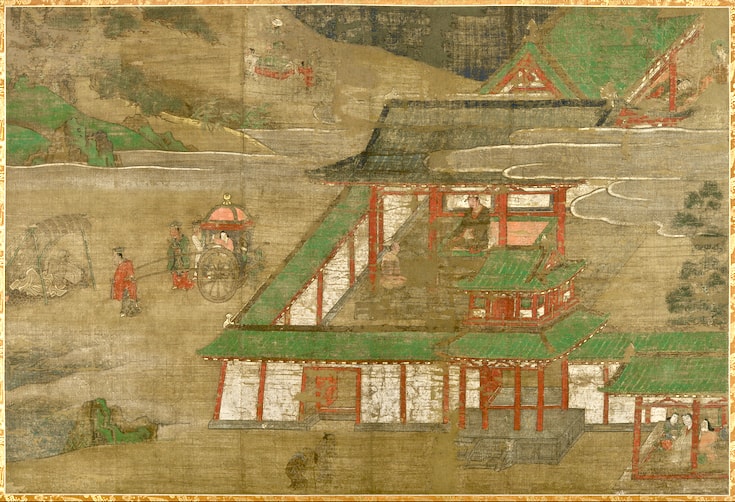 A fifteenth-century Japanese painting of the sheltered Prince Siddhartha leaving his palace and happening upon an old man. Courtesy of The Met.

Devaduta is a Pali term that means “divine messenger” (deva is “divine”; duta is “messenger”). Depending on the context, deva can also be translated as the shining one, a celestial being, or heavenly one. The ontology and mythology of this term in the Hindu tradition and Sanskrit literature is quite complex, and translations such as “angel” or “god” are often used. But they are not part of Buddhist frames of reference.

In the Pali suttas, the term devaduta is used symbolically for the three messengers of old age, sickness, and death. A passage in the Anguttara Nikaya (3:35) makes it explicit:

“There are three divine messengers, O monks. What three? … ‘Have you never seen in the world a man—or a woman—at eighty, ninety, or a hundred years, aged, as crooked as a roof bracket, doubled up, supported by a walking stick, tottering, frail, youth gone, teeth broken, grey-haired, scanty-haired, bald, wrinkled, with limbs all blotchy? … [And] did it never occur to you—an intelligent and mature man—“I too am subject to ageing, I am not exempt from ageing…?’”

The passage goes on to make similar observations regarding a sick person and a corpse. The language in this passage is almost identical to one in the Devaduta Sutta (discourse number 130 in Majjhima Nikaya, The Middle-Length Discourses of the Buddha). Judging by the sutta’s title in the Majjhima Nikaya, we have to conclude that this is where the term devaduta first appears, and that it is later extrapolated into the Anguttara Nikaya.

The Devadutta Sutta speaks of five divine messengers that, in addition to an old person, a sick person, and a corpse, include a newborn helpless infant (as a reminder of rebirth because of unwholesome actions in the past) and a person tortured after committing an evil deed. But old age, sickness, and death are generally considered to be the core of the devaduta teaching.

A somewhat humorous take on the term devaduta is offered in the Makkhadeva Sutta. In it the Buddha tells a story about a righteous king named Makkhadeva, whose barber, following the king’s earlier instructions, says upon seeing the first grey hairs appearing on the king’s head, “The divine messengers have appeared, sire; grey hairs are to be seen growing on your majesty’s head” (Majjhima Nikaya, 83:4).

The term devaduta is associated with the core foundational story of the Buddha’s life. The story, known to almost every Buddhist, says that when the young prince Siddhartha left the comfortable surroundings of his palace at the age of twenty-nine to venture forth unchaperoned into the streets of his city for the first time, he came across a sick person, a decrepit old man, and a corpse. He also saw a shramana, a renunciate with a radiant face. The tradition tells us that these four appearances were devaduta in disguise who had been sent to awaken the young prince to his preordained mission in life. This mission was of becoming a Buddha, the perfectly awakened one.

Both the Devadutta Sutta in the Majj- bima Nikaya and its extrapolated version in the Anguttara Nikaya are set in the “hell realms” presided over by Yama, the gatekeeper and ruler of those realms. These passages contain some rather gruesome descriptions of beings being tortured in those realms. The Devaduta Sutta ends with the Buddha uttering these words: “Bhikkhus, I tell you this not as something I heard from another recluse or brahmin. I tell you this as something that I have actually known, seen, and discovered by myself” (Majjhima Nikaya, 130:29).

Our challenge today is how to negotiate our way through the claims made in the Devaduta Sutta, and the resonance of devaduta metaphor in our own life and practice. Do we need to accept the hell realms and their torture schemes as literally true and create a theological or cosmological framework on that basis? Or can we see this and similar passages in the Pali suttas as metaphors and similes, and thereby create a more practice-oriented investigative framework for ourselves?

If we choose the latter approach, it may be possible for us to retranslate devaduta in a slightly different manner and get a more nuanced understanding of the inevitable processes of life it evokes: deva meaning higher or evolved or inspirational; duta meaning call, reminder, reaching out. We might thus read devaduta as “inspirational reminder” or “higher calling” or “wise reaching out.” The grey hairs of king Makkhadeva come to us all, as do all other signatories to old age, sickness, and death. All of these conditions are beyond our control and their times of arrival unpredictable. The only choice we have is to put ourselves on notice about the eventual and inevitable arrival of these messengers. We also have the choice of not being resentful or dreading their arrival.