Samvrti Satya as defined by Andy Karr, a Buddhist teacher in the Vajrayana tradition. 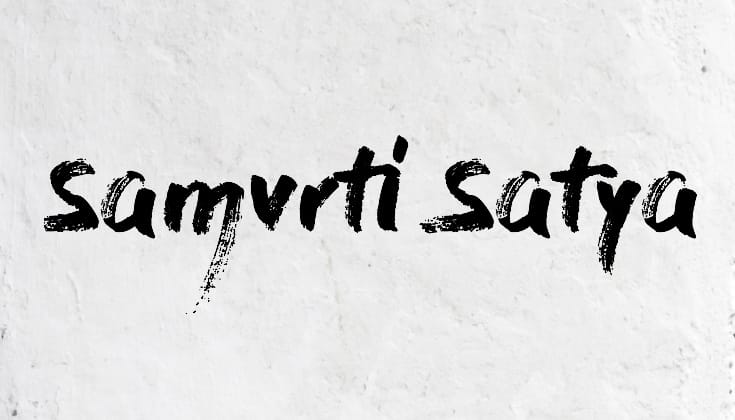 The Sanskrit term samvrti satya, used in Buddhist teachings that explore the nature of reality, is often translated as “relative truth” or “conventional truth,” but these renderings don’t quite convey the full meaning of the term. Superficial truth, deceptive truth, or obscured truth seem to come closer. Samvrti means to conceal, hide, or cover. Satya means truth. Together they mean something like “truth that conceals.” Usually, truth is related to revealing, and falsehood to concealing. How are we to understand a truth that conceals?

In fact, samvrti satya is a truth that both reveals and conceals. It reveals the causes of things while concealing their nature. Revealing the causes of things means showing how causes and conditions gather to produce appearances. Water boils under certain conditions of temperature and pressure and freezes under other conditions; crops grow when seeds get the right amount of water, warmth, nutrients, and light; if we look both ways before crossing the street, we are likely to get to the other side. Through understanding the causes of things, we are able to manipulate appearances and predict things that will appear in the future. Samvriti satya is very handy.

During the past century, science and technology have developed a remarkable understanding of the causes of things, giving us the power to produce the appearances of everything from Prozac to atom bombs. These advances have been so dramatic that we often overlook the limits of the conceptual understanding that is samvriti satya.

Buddhism, too, presents teachings about causes and results; for example, that suffering comes from self-concern and happiness comes from concern for the welfare of others. But Buddhism’s aim is liberation from conditioned existence, not just temporary improvement. Ironically, liberation comes from revealing

the nature of things that is concealed hy conceptual understanding. The nature of things is variously described as emptiness, egolessness, or suchness, and it is called “ultimate truth.” In Sanskrit, it is known as paramartba satya. The term paramartba gives rise to a variety of connotations and is worthy of its own full-length treatment. The key point, though, is that the ultimate truth refers to genuine reality, unconcealed reality.

By contrast, samvrti satya conceals because it is conceptual. Concepts may correctly or incorrectly describe the relationship between causes and results, but both correct and incorrect concepts cover the ultimate. This is because the objects of concepts don’t exist. Conceptual mind is mistaken about what appears to it.

To illustrate this, think of the relationship between a map and a journey. By looking at the map, we understand which direction to head in, how far to go, when to turn, and so on. When we make the actual journey, we won’t find any of the objects shown on the map, because they don’t actually exist in the way they are depicted. We will see things like roads and streets that will cause images of the objects on the map to arise in our minds, but nothing that looks like the map objects will actually appear.

Another illustration used in classical Buddhist texts deals with the way concepts about the relationship between seeds and sprouts obscure their ultimate nature. When a full-grown plant appears to us, the concept of its seed appears to us, but the seed itself does not. The seed is imaginary. Likewise, when we see the seed, the full-grown plant is imaginary. We don’t recognize the nature of the seed when it appears, or the plant when it appears, because they are covered by concepts about their causes, histories, meanings, and future trajectories. We don’t see things as they are but rather see concepts, which are our own projections. The ultimate is free from, or empty of, these projections.

While the mere appearance of sights, sounds, smells, tastes, and so on are emotionally neutral, conceptions do set off chain reactions. All attraction and repulsion, grasping and fixation, hope and fear, are reactions to our own projections. By recognizing the nature of things, suchness, we are liberated from kleshas and karma. The key point is that the more tightly we cling to the truth that conceals, the more elusive is the genuine reality that liberates.

Nevertheless, we can’t just discard conceptual understanding. That would merely be another concept, and we would have no idea how to proceed on the path. Instead, we use conceptual dharma to guide us to what is inexpressible, just as we use a map to guide us on a conventional journey. As Nagarjuna wrote in The Fundamental Wisdom of the Middle Way:

There is another translation of samvrti satya that avoids the seeming contradiction between revealing and concealing. It’s the phrase “apparent reality,” which is more experiential. It suggests that this is the reality experienced by ordinary beings. It contrasts nicely with “genuine reality,” which is what realized beings who recognize suchness experience.

Andy Karr dropped out of Columbia College in 1971 to pursue Buddhist training under Shunryu Suzuki Roshi, a pursuit he has continued under Chögyam Trungpa Rinpoche, and other great teachers to this day. He’s the author of Contemplating Reality, and a forthcoming book, tentatively entitled, Rediscovering Mind: A Mahayana Journey for an Age of Materialism. Learn more at www.andykarrauthor.com