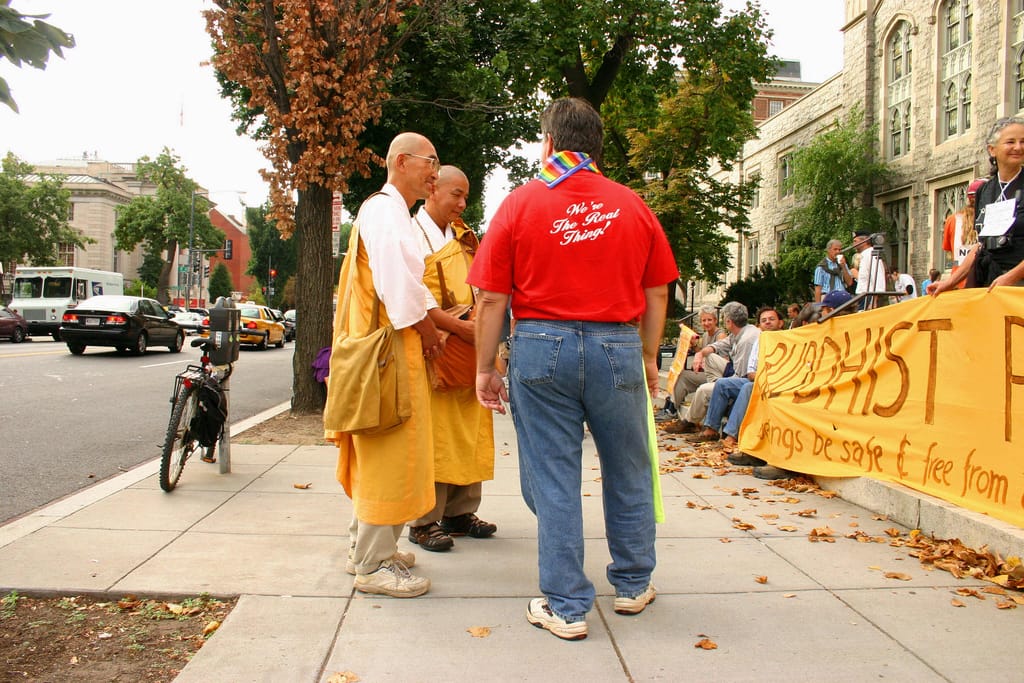 For many of us in the West, Buddhism first appears on the horizon as a path to inner peace offering relief from the tensions of daily living. This perception is reinforced by popular culture, which pictures the Buddha as a man sitting motionless with crossed legs and closed eyes, seemingly lost to his surroundings. Seldom do we think that Buddhism might hold out practical clues for resolving the complex problems that weigh so heavily on our planet. The problems seem just too big for an ancient system of contemplative spirituality.

Yet, I believe, if we as Buddhists are to adequately respond to the needs of our age, we will have to rise to the challenge. It won’t suffice for us merely to adopt Buddhist teachings as a route to deeper self-fulfillment. A predominantly personal approach to spiritual growth falls short of Buddhism’s ethical ideals and misses half its message. Greed, hatred, and delusion are not only in our mind but in the food we eat, the gas we put into our cars, and the movies we turn to for entertainment.

The Buddha taught the dharma on the basis of a far-reaching vision that pierced the depths of suffering in both its personal and collective dimensions. He offered his teaching not only as a method to tame the mind but also as a standard for ennobling us in all dimensions of our being, including the social, political, and economic. His discourses on lay ethics, communal harmony, and the duties of a king are testimony to his panoramic awareness.

There’s a real danger today that instead of using the dharma as a sharp lens for examining the existential crisis we’re facing, we’ll turn it into an intellectual toy or a cushion to soften the impact of reality. Even “Engaged Buddhism” doesn’t always live up to its potential. Though it starts off with valiant intentions, in practice it often settles for such things as operating soup kitchens or introducing mindfulness to corporate executives. While these activities are certainly good and praiseworthy, what’s sorely missing is the cutting edge of critical analysis that tackles our predicament at its roots.

It’s easy to evade that task by falling back on scriptural fundamentalism or adopting Buddhist practice as an adornment to a comfortable life. We need only look around, though, to see that time is running out. Our social and economic order has become a menace not only to our psychological resiliency but to the future of civilization itself. We’re wreaking havoc on the habitability of our planet, putting our own survival at risk.

As we struggle to stay afloat, Buddhism provides us with a clear perspective to ensure that our world remains viable. It offers an entire body of moral and spiritual values that can sustain our own well-being and nourish the wider webs to which we belong. The big question is whether we have the will and wisdom to implement them.

Especially imperiled today are three ethical principles integral to the dharma that we must uphold as guidelines to social policy. To insist on their social expression is not a matter of mixing religion and politics but of fulfilling our human responsibility; for if they were subverted, the consequences for millions upon millions of people would be unthinkable.

The first principle is nonviolence and noninjury, which is constantly being bashed as America slips into a mindless militarism decked in the trappings of patriotism. We’ve become almost inured to violence, whether against other nations, dark-skinned immigrants, or the natural world.

The second principle is social and economic justice. Too many of our brothers and sisters are being kicked out of their homes, denied urgent medical care, and forced to endure the pangs of hunger. While the rich enjoy tax breaks and corporate subsidies, ever more social services are being pulled away from those who need them most.

The third principle is commitment to truth, which, as the guardian of the first two principles, is especially susceptible to attack. Every day, distortion and disinformation reverberate through cyberspace to justify militarism, economic pillage, and the assault on social justice. Wealth controls the mainstream media, which bend over backward to serve the interests of wealth.

I harp on problems that have political and economic repercussions because these problems are real, painful, and persistent. For millions of people both in the U.S. and abroad, these constitute the noble truth of suffering. They testify to the deep spiritual and moral bankruptcy of our culture whereby an inner destitution at the top pushes social and economic destitution down on those in the lower ranks, who are often bullied by the corporate media to act against their own interests. Will we quietly pass over such injustices or will we stand up for their victims?

In his 1967 speech “Beyond Vietnam,” Martin Luther King said: “True compassion is more than flinging a coin to a beggar [but] comes to see that an edifice which produces beggars needs restructuring.” I would add that true compassion is more than just cultivating a beautiful emotion in the heart. Lovey-dovey sweetness is nowhere near enough. Many of our edifices drastically need restructuring if we are to leave behind a livable and humane planet.

As heirs to the Buddha’s teaching, we are called with compelling urgency to the task of envisaging the new structures needed to protect human life on earth. We have to create communities, both locally and globally, that express wisdom, care, and compassion. The word dharma means not just Buddhism but the whole body of principles that support human beings and draw out our best potentials. To be itself, karuna, “compassion,” must eventuate in karana, “doing.” Our work may begin with transforming our own minds and values but it cannot stop there. We have to go further and manifest these in action—in deeds that will build a safer, kinder, and more just world.