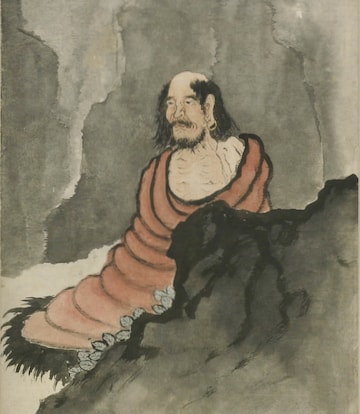 The legendary founder of Zen in China famously taught a dictum long-regarded as the taproot of Zen, “Point directly at the human mind, see its nature, and become Buddha.”

Bodhidharma is considered the founder of Zen Buddhism in China. While much of his biography may be the stuff of legend and his historicity is still in question, numerous early records speak of him (or someone by the name of Bodhidharma) as a wise and compassionate monk. Whether or not he was ever a living person, the legend of Bodhidharma has made him as real in the Zen tradition as anyone else.

But with many masters predating him, why is Bodhidharma considered the first ancestor of Chinese Zen? While there were many Buddhist monks from India at that time, and a lot of Buddhism in China, Bodhidharma was the first to introduce the specific teachings that defined the Zen school. Much of his renown comes from a famous four-line teaching attributed to him:

A special transmission outside the scriptures,
Not depending on words and letters;
Directly pointing to the mind,
Seeing into one’s true nature and attaining buddhahood.

This dictum has long been regarded as the taproot of Zen, and teachers from early times until now have credited it to Bodhidharma. While what is left of Bodhidharma’s work doesn’t contain this exact phrase, the writing attributed to him is full of teachings on observing the nature of mind.

It is said that Bodhidharma was born as the third prince of an Indian kingdom. Little is known about his youth, but he eventually immigrated to China as a missionary-monk in the late fourth or early fifth century. Some say he came by water, some say by land. In both iterations, in his journey he suffered setbacks and deprivations. In the story of the southern maritime route, his boat was tossed by storms; in the story of his northern overland route, he was besieged by bandits.

Eventually, Bodhidharma arrived and settled in China where he met Emperor Wu of the Liang dynasty, a devout Buddhist. Their famous meeting is recorded in the Blue Cliff Record, a collection of Buddhist koans compiled in 1125. The emperor asked Bodhidharma to tell him how much merit he had gained through his generous donations to construct monasteries and ordain monks. The exchange went something like this:

“How do I understand the merit I have accrued in building temples and making donations to monks?” the emperor asked.

Bodhidharma replied, “There is no merit.”

The emperor was confused because he understood karma to mean good begets good and evil begets evil, but Bodhidharma knew his intentions were not altruistic. The emperor made donations to improve karma and boost his ego.

“If there is no merit, then what is the essence of Buddhism?” The emperor asked.

Shocked, the emperor asked, “Who addresses me thus?”

“I don’t know,” Bodhidharma told him.

The emperor wasn’t impressed with these answers and Bodhidharma was disgruntled by the emperor’s failure to understand the profundity of his teachings. He left the emperor’s court, and they never spoke again. 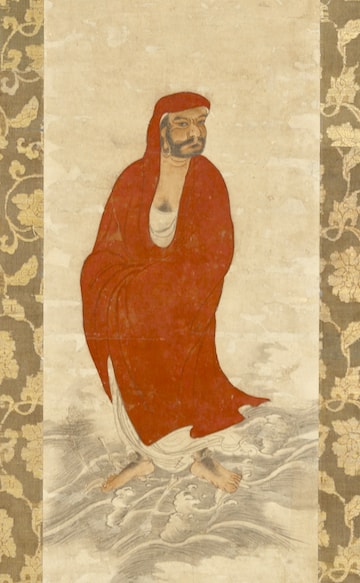 Bodhidharma Crossing the Yangzi on a Reed. Artwork by Sun Kehong (1532-1610). Courtesy of Freer | Sackler.

Bodhidharma traveled to the monastery of Shaolinsi on Songshan mountain in northern China. Legend holds that along the way, he crossed the Yangtze River on a reed, a scene frequently depicted in East Asian art.

After arriving at the monastery, Bodhidharma sat in meditation for nine years. It is said that he sat facing a wall the entire time, letting his legs wither away. Some stories even say he ripped off his eyelids to avoid falling asleep. Some say that where his eyelids fell, there grew the first tea plants in China, so he also gets credit for tea. This is the origin of the Daruma doll, a Japanese egg-shaped toy with lidless eyes and a weighted bottom that springs upright when knocked over (“Daruma” is the Japanese name of Bodhidharma). While it all seems a bit far fetched, a historical work attributed to Bodhidharma, The Two Entrances and Four Practices, references the practice of “wall-contemplation.”

Three views of a Daruma doll. Photo by Christopher Woodrich.

In many accounts, a Chinese monk called Huike came to Bodhidharma on a cold winter’s day while Bodhidharma was sitting and pleaded to become his student. Although Bodhidharma didn’t acknowledge him, Huike refused to leave. Finally, Huike cut off his arm at the elbow and presented it to Bodhidharma as an offering. Impressed by his determination, Bodhidharma asked Huike what he sought from him.

“Please pacify my mind,” he pleaded.

Bodhidharma told Huike to bring him his mind and he would pacify it.

After a long moment, Huike said, “I can’t find my mind.”

“See,” he said, “I have already pacified it.” After hearing this, Huike became enlightened and joined Bodhidharma as his first disciple.

It is said that in his old age, Bodhidharma gathered four of his enlightened disciples and asked them to convey their understanding of the dharma. While the others gave various responses, Huike stood, said nothing, bowed to Bodhidharma, and then sat back down. Based on this response, Bodhidharma formally named Huike his dharma heir.

This is historically known as the first Zen transmission from Bodhidharma—considered the founder and first patriarch of Zen—to its the second patriarch, Huike. It marks the beginning of the Zen lineage, an unbroken line that continues today.

Only two generations after Bodhidharma, his message is said to have been carried to Vietnam. Zen teachings thereafter spread throughout China and were established in Korea by the ninth century. Although Zen is usually associated with Japan, it did not take root there until the 12th century, almost seven hundred years after the death of Bodhidharma.