According to Zen priest and climate scientist Kritee, part of our work in addressing climate change is to understand systems — how they work, how we’re complicit in them, and how we can change them to work for the good. From the Spring 2020 issue of Buddhadharma: The Practitioner’s Quarterly. 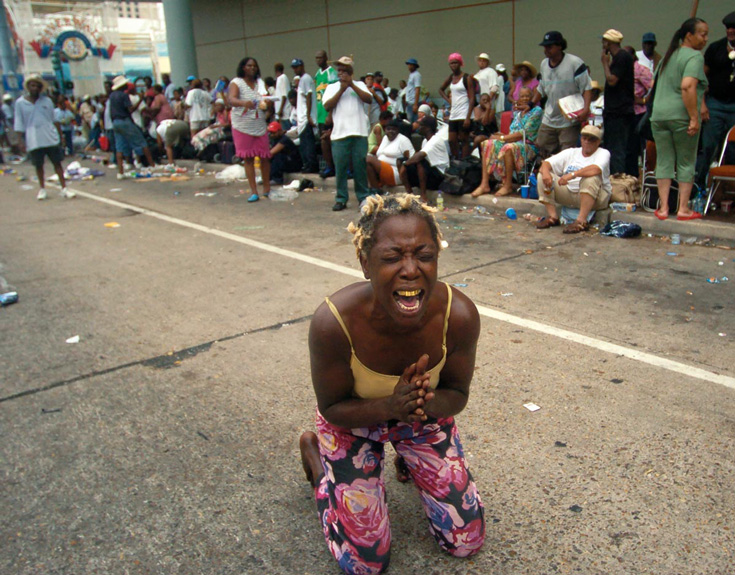 Following Hurricane Katrina, a New Orleans resident in a temporary shelter drops to her knees and screams, imploring journalists to help (September 1, 2005). Photo by Ted Jackson, The Times-Picayune/Landov

For the past decade, I have been researching the climate impacts of different food production practices, which is important because our global food system contributes more than a third of all human-generated climate pollution. Recently I had the opportunity to present my research to the Intergovernmental Panel on Climate Change (IPCC), which brought me—briefly—a sense of empowerment in the face of the climate crisis. But my deeper truth is that I find myself working with intense climate grief.

I’m not alone. A growing number of climate scientists and activists report sleeplessness, anxiety, and even panic attacks. Many are overwhelmed by grief or anger. If I were not engaged in regular meditation and grief practices, as well as strategic actions with an ever-widening circle of ecodharma activists, I know I would be overwhelmed too.

Buddhists can contribute much more radically to reducing suffering than they have so far.

In the past year, I have been in touch with a growing number of fellow dharma teachers who are waking up to the climate crisis and getting involved in climate action. This is due in large part to media attention brought on by youth-led school climate strikes, Sunrise Movement sit-ins, and Extinction Rebellion actions. While this is something to celebrate, I also think Buddhists can contribute much more radically to reducing suffering than they have so far. However, in order to do so effectively, we must bring not only our Buddhist understanding but also a systems-level view.

Averting a climate catastrophe will require enormous transitions, which raises important questions, such as: who will pay for the transitions? Will these transitions be consistent with democracy? And who will suffer the most if these transitions don’t happen—will it be the poor and the racially marginalized?

A just transition must be democratic, fair, and equitable. We must therefore consider the ethical, moral, and spiritual underpinnings of such a transition and ask how each of us—as well as our sanghas—can assist in practical and concrete ways. We must also be willing to consider changing our own behavior, and that of our sanghas, in order to create a more just and sustainable society.

As bodhisattvas committed to relieving the suffering of all beings, we start by seeing relative reality, or suffering as it is. If we don’t see the depth and extent of suffering, it’s very difficult to take compassionate action.

At least a quarter of the world’s population is already facing an existential crisis. According to the International Labour Organization, approximately a billion people live on less than two dollars a day. More than two billion people work in informal sectors and have no work contract with their employers. These people and their families struggle every day to make ends meet. One sickness, birth, or death, one leaking roof due to an extreme rainfall event, or one failed crop due to a drought can throw them into crisis. They are already facing what those in the privileged Eurocentric world fear awaits them in the not-too-distant future: illness and death brought on by extreme weather events and forced migration due to a lack of basic resources, including water and food, as well as physical safety. They have done the least to usher in climate crisis, but they will suffer the most as the climate crisis deepens.

We cannot put off dealing with the current existential crisis faced by a quarter of humanity until after we have tackled the climate crisis. We need an integrated approach that makes enormous changes to reduce greenhouse gas emissions while also redistributing power and money and avoiding climate apartheid.

How do we do this? A just transition will require working through “systems of separation,” more commonly known as “systems of oppression,” which is another way of saying systems of domination, hierarchy, or superiority. Based on myths and lies, these systems purport that one group is more normal, superior, and/or powerful, and empower it to dominate another set of living beings. For example, patriarchy, class or caste hierarchies, and human domination over animals are all systems of oppression.

Most crucially, white people of European descent have power and supremacy over Black, brown, yellow, and Indigenous people all over the world. Globally speaking, this racial domination and associated neoliberal economic systems have helped primarily white folks to amass enormous wealth, steal land, and enslave people for hundreds of years. This concentration of power and wealth is systematically guarded through militarization, laws, trade deals, and media campaigns.

While we have made progress on some fronts, for the most part we take these systems of domination to be a given. Our hearts and minds have grown accustomed to a paradigm in which one human being has control over another. This is our default, and it has infected all parts of our psyche.

In Buddhism, through meditation and other transformative practices, we aspire to know states of heart–mind that Buddha (the human being) embodied. These states of heart–mind bring us close to reality as it is. When we see the absolute reality as it is, there is no individual human being, no separate entity. There is only interdependent co-arising: I am you; you are me. I am a monarch butterfly that is going extinct, the Black woman whose five generations of family were lynched, and also Hitler and present-day fascists. All is me. Richest and poorest, we inter-are.

It is important to note that while Buddhism has devised many skillful practices to deal with the myth of separation in the consciousness of an individual practitioner, it has only just begun to grapple with systems of oppression. An individual cannot beat a system. To beat one system, it will require another system. Systems of oppression or separation must be replaced by systems of nonseparation or nonduality. The opposite of patriarchy is not matriarchy, where women are more powerful than men, but rather it is one of deep equality and solidarity. We are so used to systems of oppression that we have forgotten how to live in a way that is not separate. The top-down hierarchical systems that are rooted in exploitation and oppression must make way for systems and institutions that are rooted in compassion and sacred care of all beings. This requires more than words and good intentions; it must be backed by actions that redistribute power and wealth to those who are marginalized. Without this, societal healing and a just transition will not be possible.

While we need strategic and well-designed plans to redesign our economies, we also need spiritual and moral leaders who can penetrate hearts and minds. Their job is to embody genuine solidarity, interdependence, and friendship to help people wake up to the harm brought about by systems of domination and to see their complicity in it. Any legal policies involving redistribution of power and money will not be honored without changing the hearts of the oppressor and the oppressed.

Guided by the dharma, Buddhists can help our society disrupt the status quo, but in order to contribute to the transformation of the larger society, we also need to look at ourselves, as well as our sanghas. What do I mean? In an essay titled “Revolutionary Suicide,” African American pastor Lynice Pinkard challenges us as individuals and institutions to understand our own relationship with systems of oppression:

To what extent does any one of us identify with the forces of domination and participate in relations that reinforce domination and the exploitation that goes with it? In what ways and to what extent are we wedded to our own upward mobility, financial security, good reputation, and ability to “win friends and influence people” in positions of power? Or conversely, do we identify (by putting our lives on the line) with efforts to reverse patterns of domination, empower people on the margins (even when we are not on the margins ourselves), and seek healthy, sustainable relations?

She argues that this desire for upward mobility is killing us spiritually. It is like we all know that the tree of this civilization is rotting but we still want to climb to the top!

As Buddhists, we have taken vows not to turn away from the suffering of others, whom we come to know as ourselves. When we manifest with the full integrity of what we know to be true, we naturally find ways to help heal our world. Some of my Buddhist friends are actually putting their lives on the line to defend all beings. Even if we are not ready to put our lives on the line, we can ask important questions:

Who is in our sangha? If our sangha is not diverse, do we have relationships with Black, Indigenous, and other people of color (BIPOC) outside of our sanghas? Having these relationships often means working through the racial trauma lodged in the bodies of everyone involved. (I highly recommend Resmaa Menakem’s systematic exploration of the trauma suffered by both BIPOC and white people in his seminal book My Grandmother’s Hands.)

Are we more invested in building large Buddhist temples, or are we open to directing the money to building movements and to those on the front lines of systemic change?

Are we divesting from pathways that concentrate power and investing in those that redistribute power? How can we share power? How can we break the status quo systems of domination within our sangha or other communities we inhabit?

Are we making more than the average median income in our society? Why do we want to have a standard of living above that of others in our state or country?

Could we hire the most marginalized in our society? What do we have to learn to be able to hire and retain those individuals?

These are not easy questions. I wrestle with all of them myself and face the fear of letting go of my own privilege, wealth, and assets.

It won’t be easy, but as bodhisattvas in training, we must find the courage and compassion to step up both individually and as a community of practitioners to grapple with these questions. As we do, we might gain greater understanding of the mindset of those destroying our planet. And we might be able to say a much needed NO to too-big-to-fail oil and gas corporations (without “othering” and shaming individuals who work for them).

Given what is already happening, we do not have the luxury of assuming that we can deal with social and ecological issues after enlightenment. As we individually spend time on our cushions to face absolute reality as it is, we must also create awakened systems and beloved communities that can deal with present-day relative reality as it is without perpetuating trauma and harm.

Kritee (dharma name Kanko) is a Rinzai Zen priest, climate scientist, and a cofounder of Boundless in Motion, a community in Boulder dedicated to “Zen meditation and strategic activism.” A microbiologist and biogeochemist by training, she is a senior scientist in the Environmental Defense Fund’s Climate Program, through which she helps implement climate-smart farming in India.