Gesshin Greenwood offers an alternative to the “male fantasy” of striving for enlightenment. From the Winter 2018 issue of Buddhadharma: The Practitioner’s Quarterly 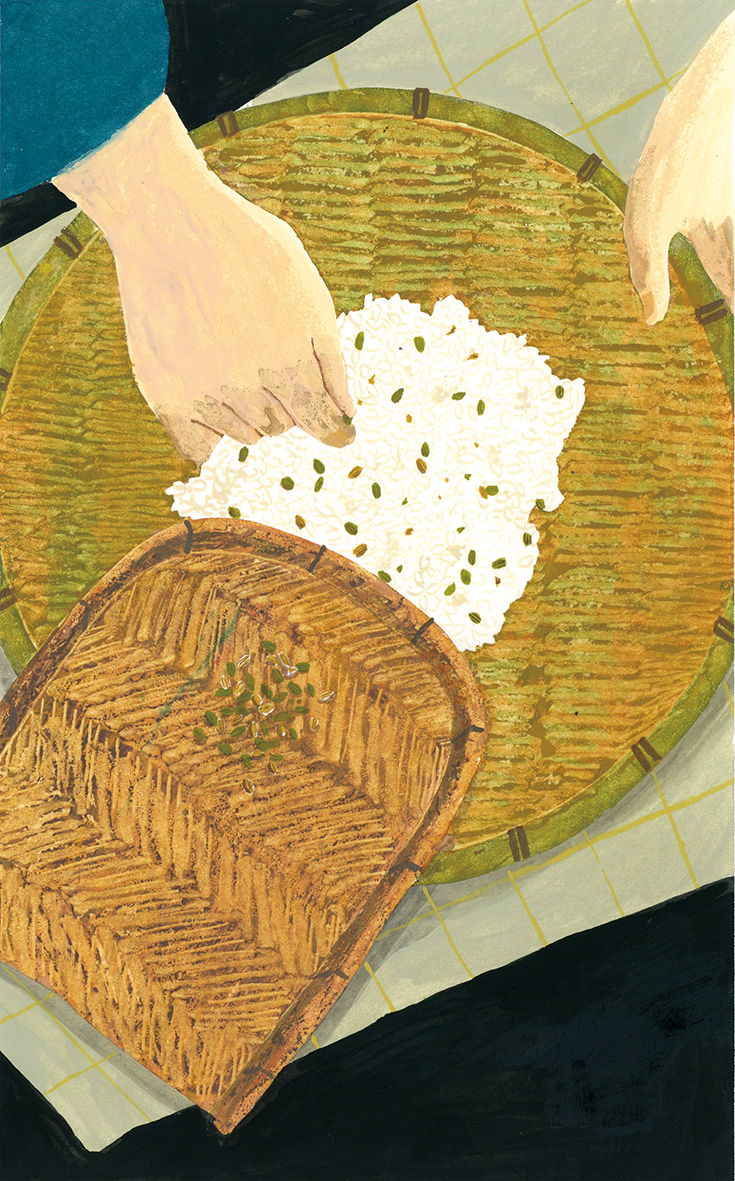 I used to hate Zen.

In fact, sometimes I still don’t really like Zen. My ex-boyfriend introduced me to Zen, and this is probably why I hated it so much. He was a lovely, idealistic, over-intellectual type who could not cook or clean, and his mom bought his clothes. He loved the koan of Nansen killing the cat. It goes like this: Some monks are arguing over a cat. The master, Nansen, holds up a cat and says to his monks, “If one of you can say a word, I’ll spare the cat. If not, I will kill it.” No one can say anything, and so he kills the cat. Later he tells this story to his disciple Joshu, who then puts his sandals on his head. Nansen then says, “Ah, if you had been there, you could have spared the cat.”

I hated this shit so much. I was coming to Buddhism with all of my suffering and anger and fear, and they give me a story about some sandals and a cat?

But eventually I met a real-life Zen master who talked about enlightenment and inspired me to ordain and try to get enlightened. I would sit in the zendo for hours, trying and trying to attain great realization, and maybe some things happened and I saw reality bend apart and open up, but this never solved the problem of my life.

While it’s not universally true that only men seek or want enlightenment, Zen practice in Japan breaks down along gender lines in some very clear ways.

When I was still practicing at my teacher’s temple, a Japanese nun who had trained at the women’s monastery visited us for a month. The way this nun spoke made it sound like the end-all and be-all of Zen practice is just cleaning and administrative work. My dharma sister was there and joked, “She sounds like ‘just do your work, concentrate on that and nothing more, enlightenment is a male fantasy.’”

The funny thing is, three years later my dharma sister and I revisited this conversation, and it turned out we both more or less agreed. While it’s not universally true that only men seek or want (or have “attained”) enlightenment, Zen practice in Japan breaks down along gender lines in some very clear ways. For most of history, women have not had access to things like higher education, temple ownership, and authority codified through the traditional dharma lin­eage. Zen nuns were prohibited from owning temples—and thus were cut off from the main source of income and author­ity for Buddhist clergy—until after World War II. Because of this lack of resources, nuns developed alternative strategies to survive—to find food and shelter as well as to practice. Most commonly, they learned and taught tea ceremony, flower arrangement, and Buddhist hymns to make a living.

Because of these historical and cultural specifics, Zen practice looks different for men and women. For those prac­ticing in coed settings, like my dharma sister and I had done, it became painfully clear that men’s “spiritual work”—dharma talks, dokusan, the earnest quests for enlightenment—were all made possible by women’s work, by the women who cooked, cleaned, and organized the schedules of those men.

The scholar Paula Arai has written about how in the face of societal inequality, instead of becoming resentful or complaining, Japanese Zen nuns attempt to convert their hardship and oppression into gratitude. Gratitude and full engagement with life become the main practice, instead of seeking an explicit kind of enlightenment on the cushion or a drastic overhaul of society. From a Western feminist perspective, this is a double-edged sword. Arai writes in Women Living Zen that for nuns, “practice is acting, being, sitting, sleeping. It is when these daily activities are done in accord with the Buddhist teachings that mundane actions become practice. Displaying awareness of the reality of life, one nun [said], practice is ‘daily cleaning.’”

For the nuns, there was no time to pursue enlightenment. We threw it away, and what was left was the whole world in front of us.

After I transferred to the women’s monastery, I heard Aoyama Roshi, the abbess, give zazen instructions for the first time. She said, “Put your right foot on your left thigh, and your left foot on your right thigh. Straighten your back. Throw out any idea of Buddha or enlightenment.”

So that’s how I tried to practice. For the nuns, there was no time to pursue enlightenment. We threw it away, and what was left was the whole world in front of us.

Three months or so after entering the women’s monastery, I was assigned to tenzo ryo, the group in charge of the kitchen and food preparation (tenzo means “cook” and ryo is “group”). We cleaned the kitchen, washed and chopped vegetables, kept inventory of the food, and prepared and stored smaller condiments like sesame salt, pickled plum, and dried seaweed.

One job that took up a substantial amount of time was the task of picking out the unpolished hulls from the polished white rice kernels. The hulls are hard to chew and difficult to digest, and depending on the bag of rice and how well it has been milled, there could be anywhere from two to two hundred hulls floating around with the white rice. Sorting has to be done by hand, very carefully.

We would sit in seiza (kneeling, sitting on our feet) along a wooden table for hours, with a small handful of white rice poured onto a black tray, and try to find small stones and rice hulls. After the first half hour, my legs started to hurt and I got bored. To pass the time, I would think about another famous Zen story.

Xuefeng said, “I remove the sand and rice at the same time.”

His teacher responds, “What will the great assembly eat then?” Xuefeng overturns the bowl. His teacher says, “One day you will study with someone else,” meaning that Xue­feng understands a little bit but still has more work to do with another teacher.

On the one hand, there are no “wrong answers” in Zen practice. On the other hand, however, there are answers in which people don’t get to eat because you dumped out all the rice.

So I was concentrating very hard on this koan about sand and rice and the great assembly, on relative and absolute, and in my profound concen­tration, I completely failed to actually remove the hulls of rice. I had somehow misunderstood the instruction and wasn’t properly identifying what was a hull and what was just an oddly shaped grain of rice. So all the rice hulls stayed in the bag. The next morning our porridge was full of them. During work we had to sort the rice all over again.

The next time around, I didn’t think about the koan of sand and rice. I just tried to actually take the hulls out of the white rice. This is also my experience of zazen prac­tice. In the beginning, I wanted some sort of enlightenment experience or understanding of buddha. I didn’t understand how a sitting practice could literally be just sitting. I sat, and I tried and tried to get enlightened, and this got in the way of actually sitting.

But in an important way, zazen actually is just sitting. It’s taking the inedible rice hulls out of the edible rice with­out making it some koan about the relative and absolute. If two Japanese nuns had that same exchange, I imagine it would go something like this:

Abbess: “Great, looking forward to it! Are we having miso soup or clear soup tonight?

[Brief exchange of cooking tips ensues, then both women carry on with work.]

There’s no teacher who can say anything that will be a substitute for your own time and effort.

Maybe I don’t get koans, but I do think that at the end of the day, actually cooking rice is more important than answering a koan about rice, because a koan about rice is answered in cooking rice well. (If any man wants to test my understanding of this koan, I challenge you to a rice-ball cook-off. First person to make a hundred rice balls wins the dharma! Go!)

Whenever I am asked to give zazen instructions, I give the same instructions I received: back straight, full or half lotus if you can, eyes open and looking down, hands in cos­mic mudra. Take out any idea of Buddha or enlightenment and just do the posture. That’s basically all the instruction I ever got, so that’s all I say. I’ve tried to coerce teachers into giving me more instruction than that, but they never do. I was frustrated with this for years.

And yet my understanding of zazen is that, at the funda­mental level, you are just sitting there, embodying being a buddha. You’re not doing anything other than sitting there. Of course when we come to zazen, we want all these things like peace of mind, concentration, tranquility, and so on. And then the asshole teacher just tells you to sit with your back straight and get rid of any hope of enlightenment? Lame! I totally understand people’s confusion.

I’ve spent a lot of time worrying about not knowing what to do in zazen and thinking I am not doing it “right.” I think everyone must go through this. My relationship with zazen has of course changed over the years, and I don’t worry anymore about doing it “wrong” or “right,” as long as I’m doing it. So when I am talking to people with questions about zazen, I am very aware that nothing I can say or do is going to help them. I’ve had the same questions as they, and nothing anyone told me helped at all. The only thing that helped was sitting more zazen. The only good advice I ever got about zazen or Zen practice in general is: “It takes time.” I never wanted to believe this, but I think it’s the only advice that anyone gives that is actually true. You just have to sit for a long time, for many years, and then wisdom and trust develop.

There are no wise words that are going to help you, because there is no substitute for doing it yourself. There’s no teacher who can say anything that will be a substitute for your own time and effort. I think the only useful thing a teacher can do is to show someone that their life is their own life and their karma is their own karma, meaning that you’re choosing how to live your life in every moment. I’ve never had a teacher “help” me in any other way than that.

No one else can do this for us, and there is no time to do it but the present moment. It’s your beautiful zazen practice, not mine. I can’t sit cross-legged for you, or breathe for you. Yes, we’re all connected to the great universe and sharing the same air, but at the end of the day, it’s just you staring at that wall, doing your work, concentrating on that and nothing more.