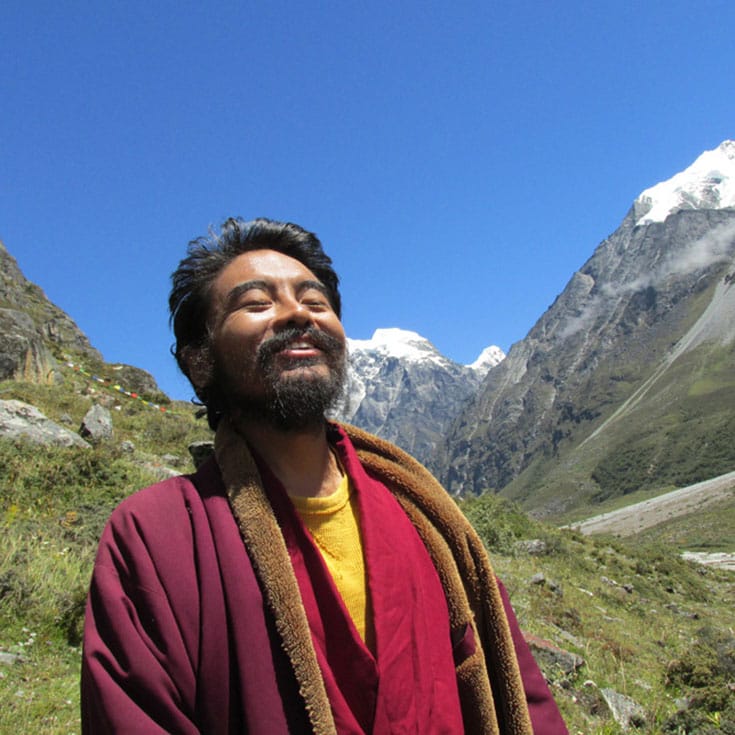 Mingyur Rinpoche on retreat in January, 2014.

In March 2012, Lion’s Roar published “The Wanderer,” about the Tibetan Buddhist teacher Yongey Mingyur Rinpoche’s secret plans to disappear and go on what would be a four-year-long wandering retreat. In November 2015 came the news that he’d returned. Now we bring you an exclusive interview, conducted by senior students of Mingyur Rinpoche immediately after he resurfaced.

Rinpoche, What gave you the idea to do this kind of wandering retreat, living on the streets with sadhus in India and meditating in caves in the Himalayas?

I had done a traditional three-year retreat, but since childhood I have had a very strong longing to do a kind of wandering retreat. I like mountains, I like caves, and I have been very inspired by the great meditators of the past and some of my own teachers, such as Nyoshul Khen Rinpoche, who have done retreats like this.

Why didn’t you tell anyone what you were planning to do?

My father, Tulku Urgyen Rinpoche, told me that he had wanted to go on a solitary wandering retreat like this. But when he tried to do it, his students begged him to return to his monastery and his teachers encouraged him to stay there. He told me that if I really wanted to do this, I shouldn’t tell anyone about it. He said, “Don’t tell anybody what you’ve been doing until you come back.”

What was it like to go from being an important Buddhist teacher living in comfort in a monastery to an anonymous sadhu, the ascetic Hindu yogis who beg and live on the street of India?

I had a strong determination to be on the streets, but I was naive to think I could live on the streets right away. It took me a while. Giving up my identity as a monk was one thing, and of course I also had to let go of my desire for comfort, food, and the basic necessities of life, even the desire to be safe. It was a good way to practice my meditation on letting go.

What was the best experience you had?

It was actually a near-death experience I had in Kushinagar, the holy place where the Buddha died, not long after I started my retreat. I got very sick with vomiting and diarrhea, and one morning my health was so bad that I was sure I was going to die.

I had a wonderful experience. There was no thought, no emotion, no concept, no subject or object. Mind was clear and wakeful, like a blue sky with the sun shining, transparent and all-pervasive.

I had some kind of dissolution, as they call it in the texts, and lost touch with my physical body altogether. Then I had a wonderful experience. There was no thought, no emotion, no concept, no subject or object. Mind was clear and wakeful, like a blue sky with the sun shining, transparent and all-pervasive. It’s very, very difficult to describe. It cannot really be put into words.

Then at a certain point I had the thought, “Okay, this is not the time for me to die.” This was somehow related to compassion mind. Then I could feel my body again and I opened my eyes. I stood up to get some water and suddenly became unconscious and collapsed. I woke up in a local clinic with a glucose drip in my arm. The next day, I recovered and left the clinic.

After this experience, my mind felt so fresh and my meditation really improved. I could appreciate everything. All resistance was gone, and I felt like I was one with the environment. I could go on the streets and rejoice in everything. I didn’t face any big problems after that.

How did the remaining years of your retreat go?

In the summers I would go into the Himalayas to Buddhist pilgrimage places such as Tso Pema and Ladakh, and in the winter I would come down to the plains and spend my time in Buddhist and Hindu holy places in India and the terai of Nepal.

The best part was being able to travel freely, with no commitment or schedule. It was complete freedom, like a bird flying in the sky. Of course, it was not without fear. I was homeless, and at times my money ran out. I would beg, and people would give me some money or food. Other times, they would just tell me to go away.

I kept my meditation practice very simple. I didn’t do any big rituals and I only carried a couple of texts with me. In some caves, I didn’t even have a shrine or an image of the Buddha. It was very simple.

Now that you’re back, how will this experience change the way you teach the dharma?

I want to teach in a more experiential style—not just meditation and practice, but also behavior and conduct. View, meditation, and conduct—these three together are very important. Maybe in the past I put more emphasis on view and meditation. Now I want to emphasize how meditation can transform our day-to-day life. Intellect, heart, and behavior—all three together.

I feel that happiness is really found in appreciation and rejoicing. Everything is a display of clarity, love, and wisdom. This is related to the main view of Vajrayana Buddhism: that we all are buddha. This enlightened nature is not just within you. It’s everywhere. You can see it and appreciate it. That’s the main cause of happiness—gratitude and appreciation.

This wandering retreat has been the best time in my life. I had been meditating for many years, and of course I’m a meditation teacher, but I still had subtle pride, subtle ego. Now, through this experience, I feel I am free like a bird soaring high in the sky. I am free and can fly everywhere.