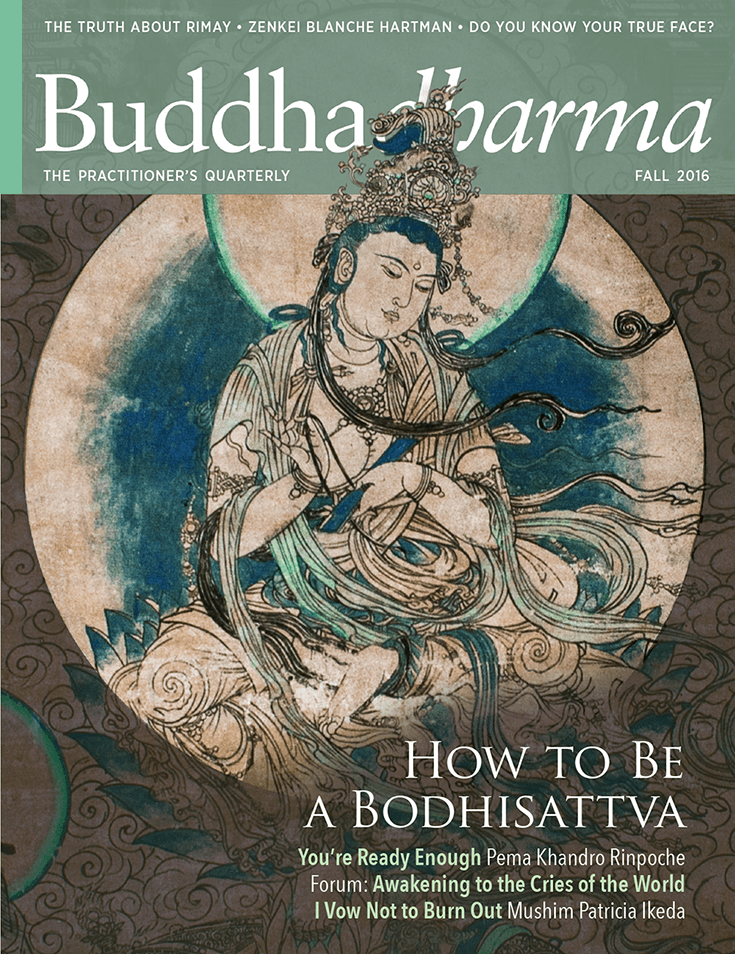 The Fall 2016 issue of Buddhadharma: The Practitioner’s Quarterly is available now. Below is a preview of what you’ll find in the magazine.

How to Be a Bodhisattva

In Accord with All Time

If you know yourself as the unity of past, present, and future, says Geoffrey Shugen Arnold, then you see you’re right where you ought to be.

Do You Know Your True Face?

Lama Rod Owens says we need to look honestly at who we are, in all our complexity. This is especially vital for those who teach the dharma.

Wherever you find yourself, says Pema Khandro Rinpoche, that’s the starting point of the bodhisattva path—all you need to do is take that first step.

Forum: Awakening to the Cries of the World

Venerable Pannavati, Anne Klein, and Ejo McMullen on the possibilities and challenges of the bodhisattva path. Introduction by Taigen Dan Leighton.

I Vow Not to Burn Out

Mushim Patricia Ikeda says it’s not enough to help others. You have to take care of yourself too.

A Lifetime of Insight

Jake Davis recalls the legacy of Burmese meditation master Sayadaw U Pandita, including his influence on the Western Insight movement.

This issue of Buddhadharma features artwork by Wang Zi Won. Watch a video of his moving bodhisattva sculpture, above.

The non-partisan view of rimay, championed by Jamgon Kongtrul, has strongly influenced Tibetan Buddhism in the West. But as Alexander Gardner explains, this view has also been widely misunderstood.

What if I’m practicing for myself?

See also: Click through our previous Ask the Teachers online.

Dharma King: The Life of The 16th Karmapa from KTD Publications

Readings of the Vessantara Jataka by Steven Collins

The Meditator’s Dilemma by Bill Morgan

The Spirit of Tibetan Buddhism by Sam van Schaik

Threads from My Past, by Carl Hultman