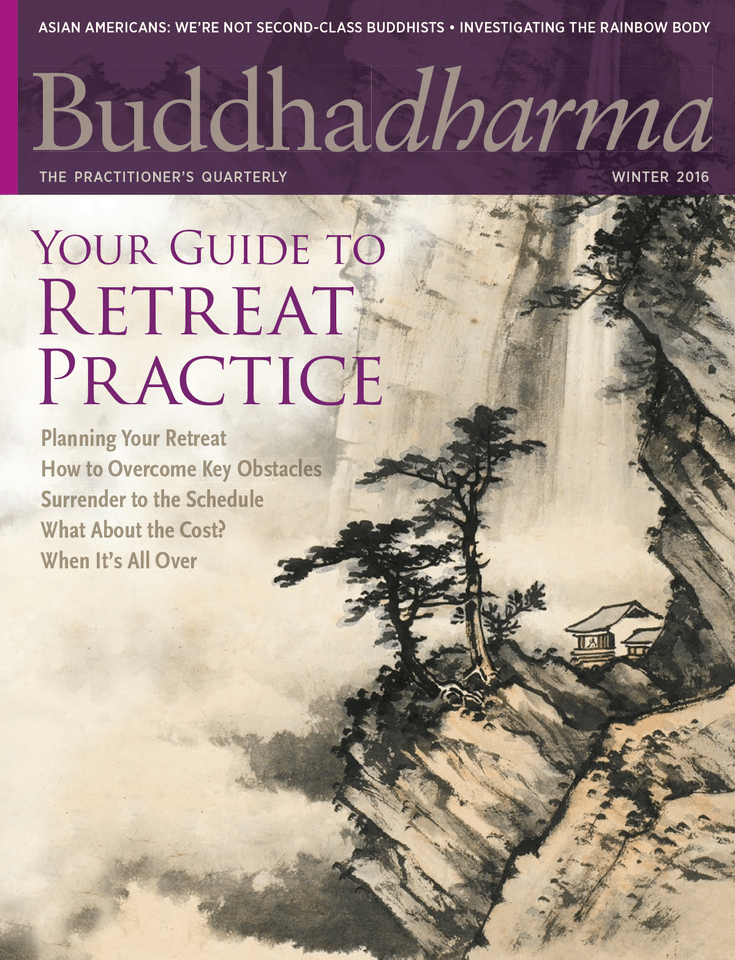 The Winter 2016 issue of Buddhadharma is available now. Below is a preview of what you’ll find in the magazine.

Your Guide to Retreat Practice

Retreat practice, in one form or another, has been an integral part of Buddhism from the beginning—and it’s something many practitioners long to do. Whether you’re considering a solo retreat or a weeklong sesshin, you’ll need a road map. Seven teachers, all with extensive retreat experience, share their insights.

It takes courage to undertake a retreat, says Andrew Holecek. But in that container we find freedom.

Surrender to the Schedule

Don’t want to wake up that early? Or sit another hour? Just do it anyway, says Roshi Pat Enkyo O’Hara.

What About the Cost?

Consider This Before You Go

Christine Skarda has spent much of the past twenty-five years on retreat. Based on her extensive experience, she offers advice on how to prepare for your own retreat.

When Bill and Susan Morgan embarked on a long-term retreat, they discovered that sometimes what’s needed is a creative and gentle approach.

When It’s All Over

Mingyur Rinpoche recently spent more than four years on wandering retreat in India and the Himalayas. In an interview with Buddhadharma, he shares his most challenging moments, as well as practical advice for returning home.

Funie Hsu says it’s time to recognize the contributions of Asian American Buddhists—and face up to the cultural appropriation that has all but rendered them invisible in mainstream white American Buddhism.

How Will You See the Guru?

Are you able to see your teacher as the Buddha? It’s not easy, says Dzongsar Khyentse Rinpoche, but for the Vajrayana practitioner, this is where the real path begins.

The Gate of Right Belief

Hoko Karnegis challenges the popular interpretation of the Kalama Sutra that suggests faith has no place in Buddhism.

A Teacher of Equality

Nichiren Shonin, the thirteenth-century champion of the Lotus Sutra, was a practical feminist, says Myokei Caine- Barrett. She shares letters he wrote to his female followers.

How Do You Step Forward?, by Jules Shuzen Harris

Don’t Put a Happy Face on Buddhism, by Mu Soeng

“I don’t know what you are doing, but stop it!”, by Zen Master Soeng Hyand (Barbara Rhodes)

Why We Study, by Thubten Chodron

The Greatest Opportunity You’ll Ever Have, by Gelek Rinpoche

The Next Big Thing, by Thubten Jinpa

How do you know when to avoid a difficult situation or accept it as a practice opportunity?

Why Awareness Becomes Natural, by Sayadaw U Tejaniya

Inside Vasubandhu’s Yogacara, by Ben Connelly

Gathering of Intentions, by Jacob Dalton

Echoes of Enlightenment, by Suzanne Bessenger

Reports from the Zen Wars, by Steven Antinoff

Buddhism Beyond Borders, edited by Scott Mitchell and Natalie Quli