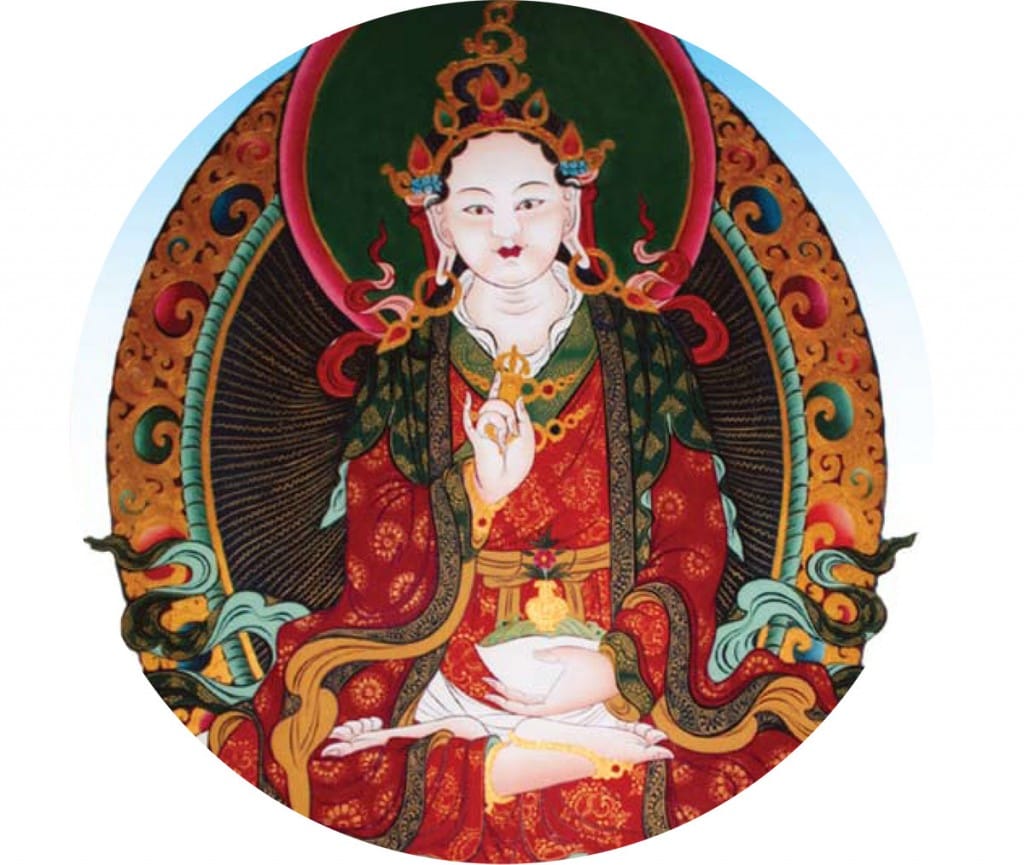 Yeshe Tsogyal is the preeminent lady of Tibetan Buddhism. While most—if not all—of what we know about her life is highly mythologized, she is revered by Tibetans as a foremost disciple and consort of Padmasambhava, the eighth-century tantric master credited with a seminal role in establishing Buddhism in Tibet. Yeshe Tsogyal is also celebrated for transcribing Padmasambhava’s teachings and concealing them as treasures across the Tibetan and Himalayan landscape, to be revealed by successive tertöns, or “treasure revealers,” during times of strife.

In her well-known namthar, or story of “complete liberation,” which was revealed by the seventeenth-century tertön Taksham Nuden Dorje (available in English translations by Keith Dowman and the Padmakara Translation Group), Yeshe Tsogyal is portrayed as a gutsy woman striving for enlightenment. She faces various trials while practicing meditation in mountain solitudes: scorn from villagers, torment by demons, starvation, and even rape. Through these trials, she is shown transforming adversity into fuel for her practice and gaining realization. Moreover, in her namthar, one finds the striking statement by Padmasambhava that a woman with strong determination has a greater potential for attaining enlightenment than a man. In this way, Yeshe Tsogyal serves as an important example of a woman who traversed the Buddhist path.

However, if we think of Yeshe Tsogyal primarily as an ancestor who demonstrates that enlightenment is possible in female form, we grossly underestimate her significance for Tibetans. Moreover, we run into the problem (as with so many female figures in Buddhist literature) of establishing her historicity.

For Tibetans, Yeshe Tsogyal is not just a figure from the distant past; she remains an active and enduring presence. In the outer frame of her namthar, we see her portrayed as a timeless being—an emanation of Sarasvati—who took human form in Tibet for the sake of propagating the dharma. And at the end of her tale, before dissolving into space, Yeshe Tsogyal promises to continue to respond to the prayers of devotees, to appear to adepts in visions, and to continue to send forth emanations.

But her story does not end there. Over the centuries, Yeshe Tsogyal has remained accessible to ordinary Tibetans through numerous liturgies that supplicate her. In addition, her potent blessings are understood to remain in the places she practiced as well as the objects she touched (strands of hair, articles of clothing, ritual implements, etc.), considered to be relics of contact. To spiritual virtuosos, both male and female, Yeshe Tsogyal also appears in visions, posing riddles, offering encouragement, or expounding on the contents of a treasure teaching.

What’s more, Yeshe Tsogyal’s presence continues in the lives of historical women who are regarded to be her emanations. Indeed, exceptional women in the Nyingma school of Tibetan Buddhism are often identified as an emanation of Yeshe Tsogyal and sometimes referred to as “Yeshe Tsogyal in person.” Her emanations include the few female tertön known to us, such as Jomo Menmo (thirteenth century) and Sera Khandro (early twentieth century), as well as Mingyur Paldrön, the daughter and successor of the famed seventeenth-century tertön Terdak Lingpa, founder of Mindroling Monastery outside of Lhasa.

From one perspective, we could say that Yeshe Tsogyal serves as an authoritative precedent, creating a cultural space for female religious authority within the otherwise male-dominated Buddhist milieu in Tibet. From another perspective, through the women identified as her emanations, Yeshe Tsogyal continues to be an active presence, intervening in the lives of ordinary Tibetans.

To illustrate this, let me introduce a contemporary female tertön from the region of Golok in eastern Tibet: Khandro Tare Lhamo (1938–2002), an emanation of Yeshe Tsogyal who served as a beacon of hope for her local community during a devastating chapter of Tibetan history. The period leading up to and including the Cultural Revolution (1966–76) witnessed the destruction of most visible symbols of Tibetan culture: monasteries were closed, texts were burned, sacred objects were looted, monks and nuns were forced to defrock, and public religious observances were forbidden. Many lamas fled into exile or died in prison, including Khandro Tare Lhamo’s first husband and three brothers, who were incarcerated in the late 1950s.

Perhaps because she was a woman, Khandro Tare Lhamo was spared imprisonment, though I was told that she did endure beatings. On one harrowing occasion, officials placed her bare chest on a hot wood-burning stove. According to the old woman who told me this story, Khandro Tare Lhamo reflected on the far greater sufferings of beings in the hell realms, and as a result she had no burn marks afterward.

One cannot find such tales in her namthar, Spiraling Vine of Faith. Since it was published in China, most of her personal misfortunes and hardships are left out, likely due to the continued sensitivity of the “Tibet question.” For this reason, the stories told about Khandro Tare Lhamo in her namthar emphasize the miracles she performed for her local community, rather than the trials she endured. For example, during a famine in the wake of the Great Leap Forward, there is no mention of the hunger she and others must have faced; we read only of her miraculous ability to multiply a measure of rice to feed those around her. And while working as part of a crew constructing a pen for wild yaks, she is reported to have carried a stone too heavy for a group of men to lift, leaving an imprint of her hand in it.

These stories show how Khandro Tare Lhamo, as an enlightened being who took rebirth for the sake of others, embodied the paradox of being confined to her historical circumstances while seeming to transcend the laws of nature. Though miraculous in tenor—as when she reportedly stopped a rockslide threatening to overwhelm a crowd with a simple gesture of her hand—her activities were nonetheless grassroots in scale, addressing the immediate needs of her local community.

Khandro Tare Lhamo’s role in the Buddhist revival in Golok beginning in the 1980s was possible due to her identification with Yeshe Tsogyal. With the onset of China’s policy of “reform and opening,” religious observances were once again allowed, and Tibetans began an arduous process of rebuilding monasteries and recovering and reprinting precious texts. In Golok, treasure revelation played a significant role in this revival as a means to recover ancient teachings from amidst the debris. For the Nyingma, treasures are meant to be revealed during troubled times, when they promise to heal the damage to the teachings and beings, thereby heralding a new era for Buddhism and society to flourish.

As an emanation of Yeshe Tsogyal, Khandro Tare Lhamo was understood to have access to the teachings of Padmasambhava in the form of treasures, sealed in the Tibetan landscape and also in the mind stream of the tertön. Together with her second husband, Khandro Tare Lhamo revealed a twelve-volume corpus of treasure literature, including a volume dedicated to Yeshe Tsogyal and a series of female deities. From the mid-1980s onward, the couple traveled and taught together, propagating these treasures.

As these stories show, for Tibetans, Yeshe Tsogyal is more than an ancestor from the distant past or simply a role model to affirm women’s potential for enlightenment. Indeed, she remains an active presence in the lives of Tibetans–both men and women–through rituals dedicated to her and through the historical women who serve as her emanations. The well-known emanations of Yeshe Tsogyal mentioned above are only the tip of the iceberg. As time goes on, more and more stories of female adepts and spiritual teachers in Tibet are coming to light. Indeed, if present circumstances are any indication, for every female Buddhist teacher who made it into the historical record, there were at least a dozen or more on the ground. As the number of studies on exceptional Tibetan women grows, let us hope that we can consider not only issues of gender but also the impact and influence of these women on Buddhist history.