The Zen master, spaceship engineer, social entrepreneur, interfaith activist, and clown devoted his life to “penetrating mysteries” and immersing himself in the unknown. 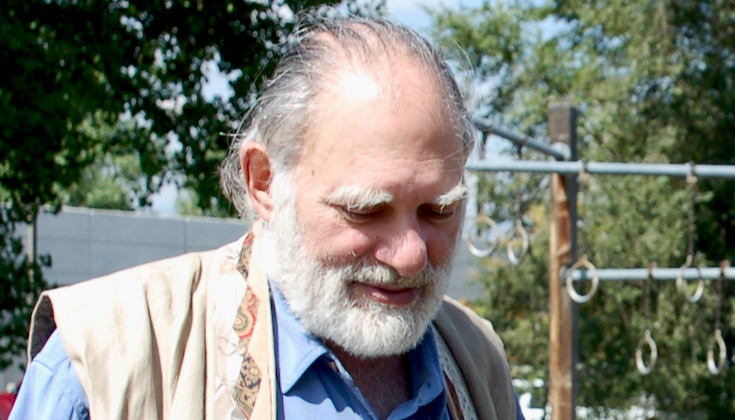 The influential Zen teacher Bernie Glassman died this morning in Massachusetts. He was 79 years old.

Glassman was a vibrant character who had a significant influence on American dharma. Along with being a Zen master, he was also an aeronautical engineer, a social entrepreneur, an interfaith activist, and a clown.

Glassman was born on January 18, 1939, to a family of socialist, Jewish, Eastern European immigrants in Brooklyn, New York. He first encountered Zen when he read Huston Smith’s The Religions of Man in English class.

In the 60s, he began meditating and soon went searching for a Zen teacher, finding Taizan Maezumi Roshi at a small temple in Los Angeles. Maezumi Roshi would go on to become one of the most influential Zen teachers in America. At the time, he was a young monk at the temple, and Glassman was immediately drawn to him. Within a few years, Glassman was serving as Maezumi Roshi’s right-hand man and studying as a formal student. In 1970, Glassman became a novice Zen priest and received his dharma name, “Tetsugen,” meaning “To Penetrate Mysteries.”

When Maezumi Roshi founded the Zen Center of Los Angeles in 1967, Glassman was one of the founding members. He would later serve as the center’s chief administrator and then executive director. Throughout his studies, Glassman also worked as an aeronautical engineer at McDonnell-Douglas, developing space travel programs. He quit his job in 1976, when he completed his training with Maezumi Roshi, becoming a certified Zen teacher, or sensei. Four years later, he founded his own community in the Bronx.

Glassman always had an interest in social causes. Once, when driving home from work, he had a vision of hungry ghosts — beings who represent unfulfillable desire — and realized that there was no separation between himself and these beings. He decided it was his life’s mission to help those in need.

In 1982, Glassman opened Greyston Bakery in Yonkers, New York. Greyston employs people who conventional businesses deem “unemployable.” It now has more than 75 employees and produces the brownies for Ben & Jerry’s Ice Cream. Greyston was the first piece of the Greyston Foundation, which eventually grew to include the Greyston Family Inn, a housing provider for families in need; Maitri Center, a medical center serving those with AIDS-related illnesses; and Issan House, which provides housing for Maitri’s patients.

In May of 1995, Maezumi Roshi died suddenly by drowning, at age 64. His final dharma teaching was a letter that he wrote bestowing final approval on Glassman, establishing him as a roshi. The letter concluded with the lines,

Life after life, birth after birth
Never Falter.
Do not let die the Wisdom seed of the Buddhas and Ancestors.
Truly! I implore you!

In his will, Maezumi Roshi named Glassman as president of his community.

In the second half of the 1990s, Glassman shifted his focus to establishing the Zen Peacemakers Order, an interfaith organization dedicated to the cause of peace and social justice, with his wife, Sandra Jishu Holmes. In 1998, Glassman and Holmes moved to Santa Fe to focus on The Zen Peacemakers Order. Twelve days later, Holmes died from a heart attack — a tragedy that Glassman wrote about in Lion’s Roar magazine.

Glassman continued the work that he and his wife had started. The Zen Peacemakers Order — now known as Zen Peacemakers — became famous for its Bearing Witness retreats and Street Retreats. On the Bearing Witness retreats, participants meditate at sites where atrocities have taken place, such as Auschwitz-Birkenau and Rwanda. On the Street Retreats, participants take to the streets for multiple days, to live as homeless people and practice zazen meditation on sidewalks and in parks. Zen Peacemakers is founded on three core tenets: Not knowing, bearing witness, and loving action.

Around the same time, Glassman also started training as a clown with professional clown Moshe Cohen, aka Mr. YooWho. Cohen has written that Glassman’s intent was not to become a clown, but “rather, he wished to use ‘tools of tricksterdom and humor’ to address out of balance situations in his Zen world.”

Glassman developed a friendship with Oscar-winning actor Jeff Bridges. Together, the two wrote a book inspired by Bridge’s leading role in The Big Lebowski, called The Dude and the Zen Master, about Zen lessons in the classic comedy.

Glassman empowered many students, including notable Zen teachers such as Joan Halifax, Peter Matthiessen, Fleet Maull, Wendy Nakao, and Pat Enkyo O’Hara. Many of his students have gone on to establish their own centers and communities.

In January of 2016, Glassman suffered a stroke, from which he at least partially recovered. He spoke with Lion’s Roar about the Zen lessons he encountered in his recovery.

Glassman is survived by his spouse, Eve Marko, his two children, Alisa and Mark, and four grandchildren.

For more on the life and teachings of Bernie Glassman, read his teachings on Lion’s Roar and this selection of related readings:

A Selection of teachings by Bernie Glassman: