Buddhist funeral traditions around the world help both the dead and their loved ones let go and move on. 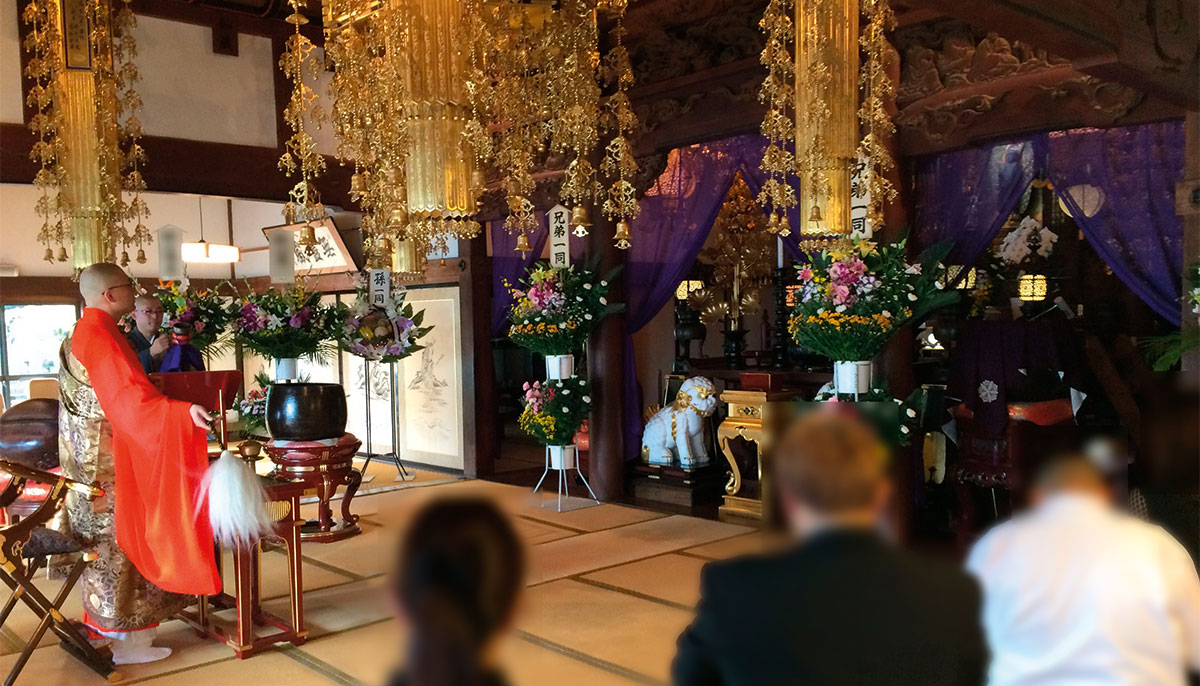 At the heart of a Zen funeral is ordination. In the ceremony, the deceased is ritually ordained in the same way that living monks and nuns are. This is done because total dedication to spiritual life, of the kind undertaken by monastics, is seen as the natural endpoint of life, even if that wasn’t the case when the person was alive. Ordination is also seen as increasing the probability of a favorable rebirth.

To begin the funeral ceremony, a vigil is maintained by relatives for a day and a night while Zen priests chant from scripture and an altar is prepared in the household. Attending mourners offer okoden, or “condolence money,” to the family of the deceased. The centerpiece of the altar is a portrait of the deceased, alongside candles and offerings of flowers and fruit.

The dead’s ordination is the same as a living nun’s or monk’s. The precept master asks the body three times if the deceased will observe and embody the five precepts. Where a living monk or nun would offer their vow, the corpse’s silence is interpreted as acceptance.

The deceased is then given a Buddhist name and presented with a lineage chart connecting them with enlightened masters stretching all the way back to the Buddha himself. The family of the newly ordained is provided with their own tablet with the deceased’s Buddhist name on it, and the tablets are either kept in the local temple or displayed in the family’s household altar afterward.

Some Zen funerals also feature a shout which is meant to sever the deceased’s bond to the earthly plane. Those who have attended such ceremonies say this also provides a moment of catharsis for the mourners. The funeral concludes with the cremation of the deceased’s body.

What, then, are Zen funerals like for those who are already ordained? The funeral of a monk or nun can take different forms, both long (involving a procession including the deceased’s robes and lineage papers) or very short. The funeral for the founder of the Soto Zen, Dogen, is famously said to have consisted of just a short moment of chanting by his most senior disciple.

Sharing Merit with the Dead

White cloth, a symbol of virtue, marks a Theravadan funeral in the Sri Lankan tradition. Fringed palm fronds and white banners, often with a picture of the deceased, mark the way to the home of the deceased. A white banner declares in large writing: “All conditioned things have the nature of decay.” In the house, mourners in white are greeted by relatives of the dead, the men dressed in sarongs of white cloth and white shirts, the women in white saris. Having been washed by family members, the body of the dead is also attired in white.

The wake, during which the deceased’s family greets and feeds the guests, lasts for several days, which allows those traveling to reach the funeral house. Guests sometimes bring gifts of food for the family.

The funeral ceremony truly begins with the arrival of the monks. They enter the front room of the funeral house, where their feet are washed by a male member of the household. The monastics are guided to chairs draped in white cloth and the deceased’s family kneels before them in respect.

Then the coffin is brought to the front room, or remains in a tent in the front yard if there isn’t room in the house, and a salutation chant to the Buddha is offered, followed by the chants of the three refuges and the five precepts. Parcels of white cloth are presented to the monks, and the mourners chant, “We offer the ‘cloth of the dead’ to the community of monks.” This gift of cloth has a practical origin. Monks in Sri Lanka, as elsewhere in Theravadan societies, rely on the community to feed and clothe them. Payment for presiding over the ceremony comes in the form of white cloth.

In this merit-sharing culture, the Theravadan funeral also features a bowl filled with water by the deceased’s family until it overflows, representing giving merit to the dead so their rebirth will be a promising one. As the water is being poured, the monks chant: “Just as rivers full of water fill the ocean full / Even so does what is given here benefit the dead.”

After a sermon based on Pali scripture is delivered by the senior monk, the mourners chant “Sadhu!” three times, an expression of gratitude connected to the attainment of arahatship. Speeches by family and neighbors follow and then the coffin is conveyed to the burial ground or crematorium under a white umbrella.

Two important dates continue the remembrance ceremonies after the day of the funeral: Mataka-bana, when a monk returns a week later to deliver a sermon to the family and other mourners, and Thun masa-dana, an alms-giving three months after the funeral to support the monastics who officiate at funerals and other ceremonies in the community.

Guiding the Dead Through the Bardo 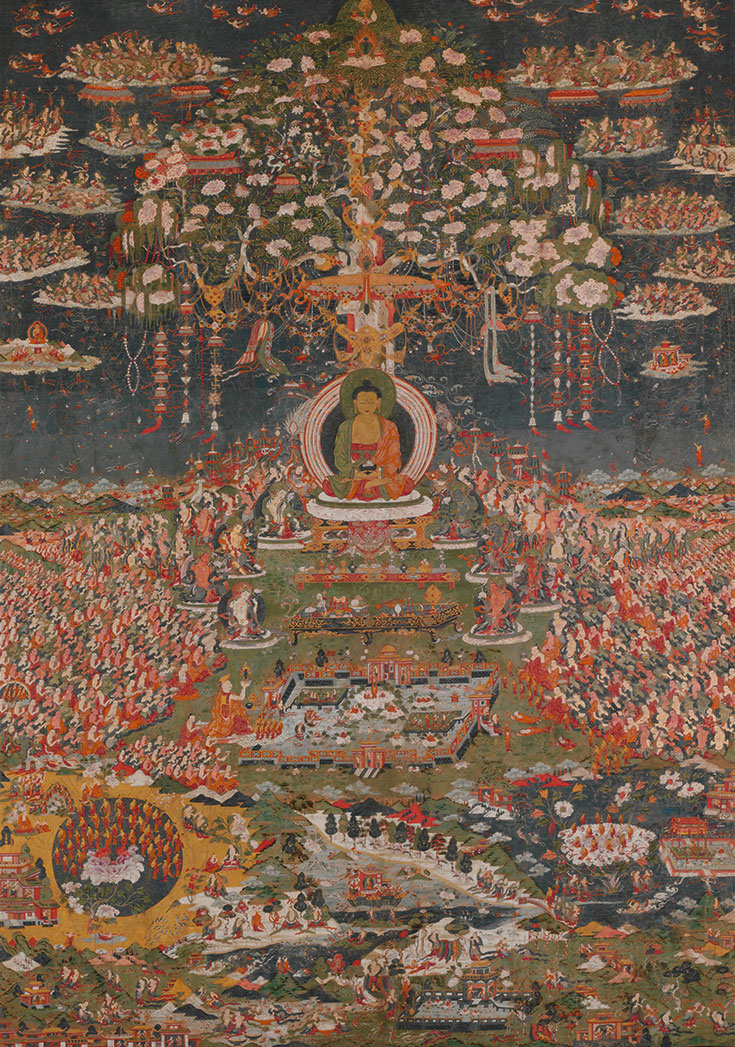 A Tibetan thangka painting of the pure land of the primordial buddha Amitabha, known as Amida in Japanese. Barbara and William Karatz Gift and funds from various donors, 2004 / The Metropolitan Museum of Art

The Tibetan approach to death and dying is guided by the teachings of the Bardo Thodol, popularly known in the West as The Tibetan Book of the Dead. This text describes what happens to us in the bardo, an intermediate period or gap between death and rebirth. During this time, it is possible to advise and help the deceased so they can achieve enlightenment or at least a favorable rebirth.

In Tibetan Buddhism, there are a number of meditations and rituals that can be performed after someone dies or during their dying process. These include reading them the Book of the Dead over a forty-nine-day period to guide them through the various stages of the bardo journey, and powa practice, in which an accomplished master can help the dying person transfer their consciousness directly into an enlightened state.

The sukhavati ceremony is traditionally performed shortly after a person’s death. In this ceremony, their loved ones, friends, and fellow practitioners, guided by a Buddhist teacher, pray they will be reborn in Sukhavati, the Western Paradise or Land of Ultimate Bliss. This is the enlightened pure land of the primordial buddha Amitabha in which they are free of all karma, defilements, and suffering.

In this ceremony, the congregation generates loving-kindness and compassion toward the deceased, who may be suffering confusion and fear in the bardo. They urge the deceased to let completely go of their previous identity and karma and ask the buddhas and bodhisattvas to guide them to the pure land. Here is a prayer that is typically recited in Sukhavati ceremonies in the Kagyu school of Tibetan Buddhism:

Wonderful Buddha of Limitless Light [Amitabha], to his right the Lord of Great Compassion and to his left the Bodhisattva of Great Power, surrounded by an infinite retinue of buddhas and bodhisattvas.
The joy and happiness is limitless and wonderful in this pure land called Dewachen [Sukhavati].
As soon as this life has passed away, without the diversion of other births,
May [name of the deceased] be born there and thus behold the face of Amitabha.
All buddhas and bodhisattvas of the ten directions, please grant your blessing that the wish expressed in this prayer be accomplished without hindrance.

In some versions of this ceremony, a photograph of the deceased is burned at the climax of the ritual so the deceased does not hold on to their former identity. As the photograph becomes ash, the prayers conclude and in the silence, the teacher intones the single syllable HUM, the mantra of great compassion. All pray their loved one will take the excellent opportunity of the bardo state to enter Sukhavati, the paradise that is freedom from karma and suffering.

The funeral rituals of Jodo Shinshu Buddhism, as practiced in the Buddhist Churches of America, remind practitioners that through taking refuge in Amida Buddha, the central figure in Pure Land Buddhism, one can transcend time and space, and join together in the pure land as buddhas before returning to samsara to help others. In this way, death is understood to be a beginning rather than an end, and funeral rites offer comfort, solemnity, and the opportunity to express gratitude to the surviving family and friends.

After a person’s death, the minister is contacted by the family and the Makuragyo (literally “pillow service,” or bedside service) is performed. The home altar is decorated with white cloth and flowers, as is the body. The minister will chant one of the gathas from the Larger Sutra of Immeasurable Life, such as Juseige or Sanbutsuge.

Often, relatives live too far away for the body to remain long enough for them to travel to the funeral, so a cremation is done and the funeral takes place with a photo and urn. The funeral service itself begins with the ringing of the calling bell, reminding listeners of the impermanence of all things, an important remembrance in times of death.

Then there is a chanting of Shoshinge, by Shinran, during which guests come up to burn incense, symbolic of the purification of one’s heart and mind to receive the truths of the Buddha. After this, there is an opportunity for eulogies by friends and family, followed by a dharma teaching and the recitation of Rennyo’s “White Ashes” from the minister, which concludes with the line: “By so understanding the meaning of death, we shall come to fully appreciate the meaning of this life, which is unrepeatable and thus to be treasured above all else.”

Traditionally, the service ends with some words of acknowledgment and a meal afterward, held at the temple or a nearby restaurant.