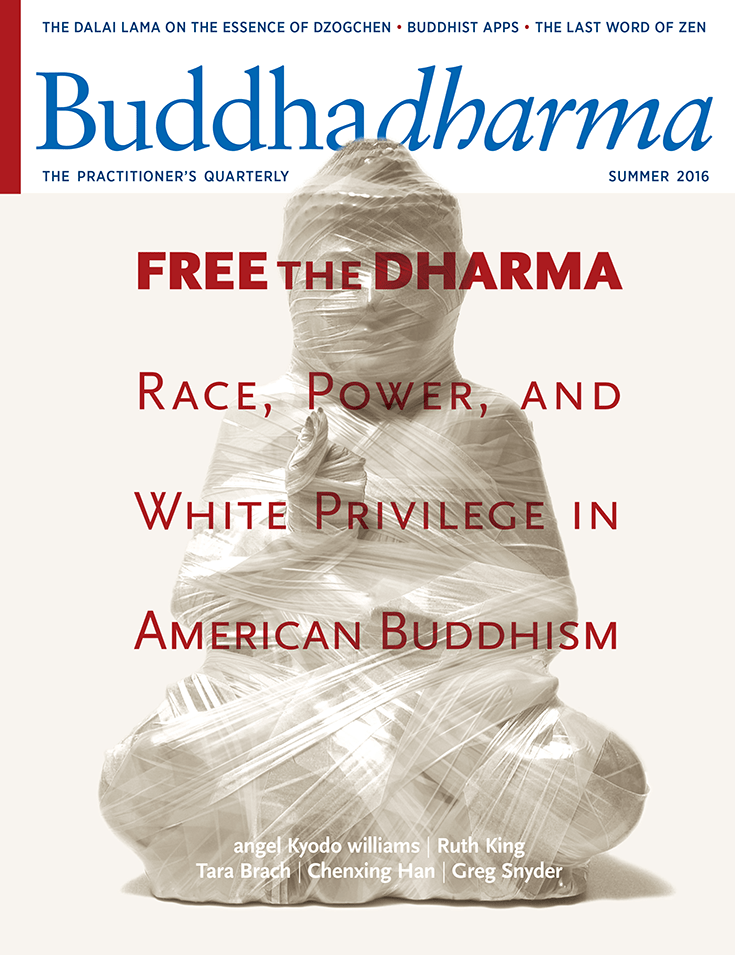 The Summer 2016 issue of Buddhadharma: The Practitioner’s Quarterly is available now. This issue explores issues of race, power, and white privilege in American Buddhism. Below is a preview of what you’ll find in the magazine, including pieces you can read online.

In his teaching on the essence of Dzogchen, the Dalai Lama describes the shock that naturally accompanies an experience of innermost awareness, which is actually the basis of all reality.

Where Will You Stand?

If we are to uphold the dharma, says Rev. angel Kyodo williams, we must stand up to racism and expose its institutionalized forms—even in our Buddhist communities.

Healing the Broken Body of Sangha

As long as race continues to divide us, says Ruth King, it is as if we are missing parts of our own bodies. Here are five steps we can take to help ourselves—and our sanghas—become whole.

When Tara Brach came to recognize her own white privilege, it changed her as a dharma teacher and leader.

Chenxing Han examines the stereotypes that have marginalized Asian American Buddhists and reports on the rich diversity and depth of a new generation of practitioners.

Waking Up to Whiteness

For our practice to have meaning in today’s world, says Greg Snyder, it must include a thorough understanding of our racial identities and their impact. This is particularly urgent for white practitioners.

The Last Word of Zen

Melissa Myozen Blacker invites us to dream ourselves into the tale of Deshan and explore the ultimate meaning of Zen.

It’s Our Journey, Too, by Tynette Deveaux

Enlightenment: Is There an App for That?, by Sam Littlefair Wallace

The karma of assisted suicide

Tibet on Fire by Tsering Woeser, reviewed by Robert Thurman

Engaging Buddhism: Why It Matters to Philosophy by Jay Garfield, reviewed by Constance Kassor

The Cypress Tree in the Garden: The Second Generation of Zen Teaching in America by Richard Bryan McDaniel

The Karmapas and Their Mahamudra Forefathers by Khenpo Sherap Phuntsok

Trust, Realization, and the Self in Soto Zen Practice by Daijaku Kinst

It Was Me, Too, by David Weinstein