Milarepa was a Tibetan master, yogi, and poet who led an inspiring life of spiritual progress and human accomplishment. His story exudes timeless themes of evildoing and redemption, perseverance in the face of many hardships, and dedication to the path. 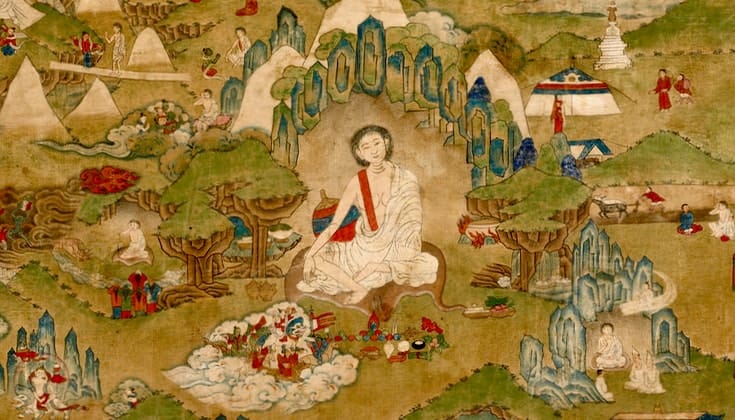 Even in the best of times, no one can describe life high up on the Tibetan plateau as easy. But whatever the hardships, one famous story of a Tibetan man has—for a thousand years—provided his people with a source of deep solace and great inspiration. This man is known as the Lord of Yogis, Milarepa, and his story is one of intense and varied sufferings, unwavering commitment to dharma practice, and supreme triumph.

In Andrew Quintman’s translation of The Life of Milarepa (Penguin Classics, 2010), Milarepa’s story begins in the mid-eleventh century in the region of Gung-tang in southern Tibet, near the Nepalese border. Although various scholars give slightly different dates for Milarepa’s birth, the range falls within a twenty-five-year period between 1028–1053. “Mila” was his family’s surname, deriving from the expression “Mila! Mila!” uttered in fear and surrender by a demon exorcised by Milarepa’s great-great-grandfather. “Repa,” meaning “cotton-clad,” was a name he acquired later, derived from the thin, simple robe he wore in meditation retreat.

Milarepa’s father, Sherab Gyaltsen, was a successful merchant. At twenty, he married a daughter of a local influential family, the intelligent and beautiful Nyangtsa Kargyen. Some time later, she gave birth to a son. Sherab Gyaltsen was traveling on business at the time, and he was so delighted to receive the news that he named his son Töpah Gah, meaning “Joyous to Hear.”

He named his son Töpah Gah, meaning “Joyous to Hear.”

Thus, Milarepa was born into an environment of material prosperity and familial bliss. He and his younger sister, Peta Gönkyi, lived with his parents in a mansion that had many servants, and were raised with love. But soon, everything changed.

When Milarepa was seven years old, his father fell ill and died. In his will, he made his brother and sister-in-law the guardians of his estate until Milarepa came of age, and he placed his wife, Milarepa, and Peta under their care. But Milarepa’s uncle and aunt did not honor his father’s wishes. They appropriated his wealth for themselves and forced Milarepa, his mother, and sister to live as their servants. As Milarepa describes: “Our food was food for dogs, our work was work for donkeys… Forced to toil without rest, our limbs became cracked and raw. With only poor food and clothing, we became pale and emaciated.”

When Milarepa turned fifteen and came of age, his mother scraped together what she could in order to host a banquet for his aunt, uncle, other relatives, and neighbors. She pleaded for her husband’s will to be honored, but the uncle and aunt refused, and publicly taunted and humiliated her even further: “Your possessions? We don’t have them. Even if we did, we wouldn’t give them to you. So if you are many, wage war; if you are few, cast magic.”

Little did they know that their words would come back to haunt them. From her hysterical grief, Milarepa’s mother developed an iron resolve for revenge. She insisted that Milarepa learn black magic so he could violently punish their enemies, and she tolerated neither his hesitation nor dissent. More than once she vowed to him that she would repay anything less than complete acquiescence and success with suicide before his very eyes.

Milarepa’s magic destroyed his uncle and aunt’s house and killed thirty-five people who were attending a wedding feast in the home, including the uncle and aunt’s sons and their wives. Then, at his mother’s insistence, Milarepa sent hailstorms to destroy the local harvest in response to their neighbors’ threats of reprisal.

Though the threats were pacified, Milarepa’s conscience was not. His remorse was so intense that “during the day I forgot to eat. If I went out, I wanted to stay in. If I stayed in, I wanted to go out. At night I was so filled with world-weariness and renunciation that I was unable to sleep.” He was certain that the Buddhist path could help purify his actions, and he went out in search of a guru. The first one he met did not see him as a proper match, and sent him instead in search of Marpa the Translator, the guide who would lead him to the pinnacle of realization.

But following Marpa was a supremely difficult test that pushed Milarepa to his physical and emotional limits. As Lobsang Lhalungpa observed in his translation of The Life of Milarepa (Shambhala Publications, 1977), “Marpa was absolutely clear in his mind that this big-hearted little man whose mind was completely shamed and shattered could not gain the desired transformation by any normal training.” More powerful methods were necessary. Marpa commanded Milarepa to build, without assistance, a fortification tower on the border of his property, and after some time to tear it down and start over. This happened four times, and during the long, arduous process, whenever Milarepa requested dharma instructions from Marpa, the teacher berated and often beat his student. Only when Milarepa’s increasingly desperate and then even deceitful attempts to receive teachings left him on the brink of suicide did Marpa finally relent and give Milarepa all the teachings he could have wished for.

Though Milarepa’s wish to practice what Marpa had taught him was strong, his need to reunite with his mother was stronger — he left his teacher and went back to his homeland. When he arrived, he found his house in ruins, with the bones of his mother inside.

Then I walked across the doorstep and found a heap of rags caked with dirt over which many weeds had grown. When I gathered them up, a number of human bones, bleached white, slipped out. When I realized they were the bones of my mother, I was so overcome with grief that I could hardly stand it. I could not think, I could not speak, and an overwhelming sense of longing and sadness swept over me… But at that moment I remembered my lama’s oral instructions. I then blended my mother’s consciousness with my mind and the wisdom mind of the Kagyu lamas… I saw the true possibility of liberating both my mother and my father from life’s round.

This stunning lesson in impermanence gave Milarepa the final push he needed to follow Marpa’s command to meditate in mountain retreat. He stayed there for many years, until his clothes turned to rags, his bones protruded, and the nettles he ate turned his skin green. Hunters and thieves who came upon him thought he was a ghost. When he went begging for food, his uncle, aunt, and neighbors attacked him, and he barely escaped. His sister, who had also become a beggar, wept in misery at his apparently even sorrier state.

Milarepa achieved his goal of perfect realization—buddhahood—and won the faith and love of almost all the people of his land.

But within, Milarepa had a perfectly clear and unwavering resolve to realize the true nature of his mind through meditation practice. This made him happy and content, and gave him the strength to overcome all external obstacles. His serene confidence that realizing the true nature of mind was the only way to gain liberation from suffering won over all who had pitied and scorned him. Both his sister and aunt became his disciples.

Milarepa achieved his goal of perfect realization—buddhahood—and won the faith and love of almost all the people of his land. A few dharma teachers were jealous, and though some of these became Milarepa’s students, one, Geshe Tsakpuwa, conspired to poison him. Milarepa knew of the plot yet went along with it anyway because he felt that, at the age of eighty-four, the time had come for him to pass away. The account of his funeral is a wonderful description of miraculous signs, and disciples arguing amongst each other and then receiving pacifying instructions from gods, goddesses, and Milarepa himself.

Milarepa’s story is one of struggle, anguish, resolve, and triumph—all of which make him recognizably human. As Milarepa himself told his students, “there is no greater misunderstanding” than to regard him as anything but an ordinary person who awakened to his own natural wisdom and compassion with the help of Buddhist meditation practice. In this way, Milarepa invites and encourages us, as if to say: “Yes, you too can do it.”

For more about Milarepa, see also:

This article is adapted from a feature review published in the Winter 2010 issue of Buddhadharma.