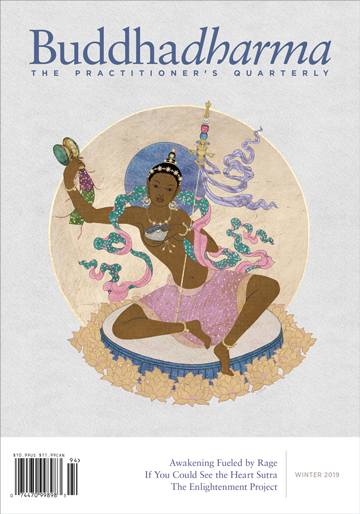 The Winter 2019 issue of Buddhadharma: The Practitioner’s Quarterly features in-depth teachings for cultivating your Buddhist practice and manifesting those teachings meaningfully in everyday life. Inside, you’ll find thoughtful commentaries, reviews of the latest Buddhist books, Ask the Teachers, and more.

Free from the Burden of Holding On

What do you cling to? Let it go, says Ajahn Jayasaro, and you’ll discover something profound.

Jeff Wilson explains how the Jodo Shinshu school of Pure Land Buddhism emerged from the refugee experiences of its two Japanese founders, Shinran and Rennyo. He tells us why that history is particularly relevant to the refugee and migrant crises today.

Ethical Conduct is the Essence of Dharma Practice

The Dalai Lama and Thubten Chodron outline three levels of Buddhist ethical codes, how we can follow them, and what it looks like when we miss the mark.

The Four Immeasurables Leave Nothing Untouched

If you don’t want your happiness to impede that of someone else, says Vanessa Zuisei Goddard, practice the four immeasurables. It will help you make space for others in your mind and to see others as yourself.

How the Sacred Treasure of Literacy Came to Tibet

When written language arrived in Tibet, says Patrick Dowd, it brought the dharma with it.

If You Could See the Heart Sutra

Paula Arai introduces us to the world of Tsuneo Iwasaki, who discovered a world of practice in giving (actual) shape to the Heart Sutra.

The Enlightenment Project, by Rob Preece

The Circle of the Way: A Concise History of Zen from the Buddha to the Modern World by Barbara O’Brien

Enlightenment and the Gasping City: Mongolian Buddhism at a Time of Environmental Disarray by Saskia Abrahms-Kavunenko

The Theravada Abhidhamma: Inquiry into the Nature of Conditioned Reality by Y. Karunadasa