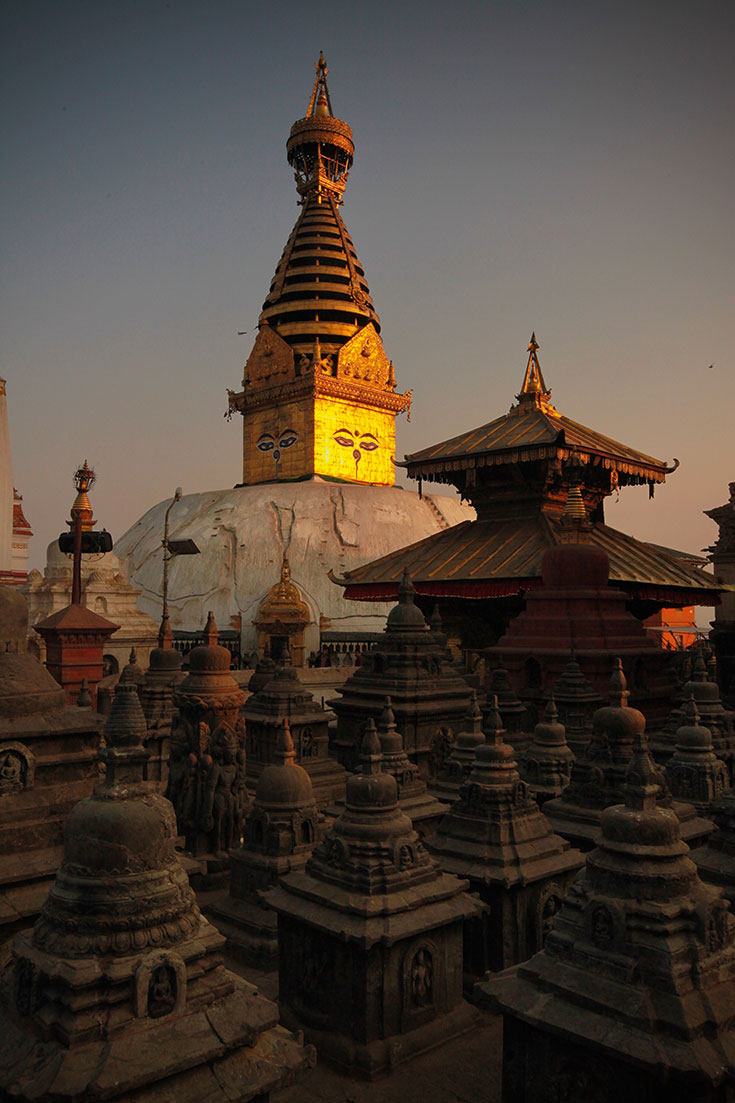 At Swayambhunath Temple in Kathmandu, Nepal, the stupa is adorned with eyes. A Nepali symbol for the number one serves as stylized noses and represents the unity of all things. All images by Chris Rainier, excerpted from “Sacred: In Search of Meaning.” Copyright 2022, Mandala Publishing.

Enveloped by darkness, it took me a while to see the light within the void.

At first, it was a faint blue line searing the desert horizon. Then it spread across the night sky. Slowly, as the first colors of sunrise cut the sky, another Sahara Desert day had begun. I was some five hundred miles deep in the baking sand dunes of northern Mali on a camel expedition in search of the sacred. We’d left Timbuktu weeks earlier heading north, navigating by an ancient system of the Tuareg, the blue men of the desert. Each day after his morning prayers, my guide, a devote Muslim named Mohammed, would sit quietly on a high sand dune tracking the lingering morning star, then he’d intensely observe the shadows across the land and the direction of the wind patterns across the desert to the horizon. All of these subtle signs allowed him to lead us precisely across this sea of sand. Without even a compass, Mohammed was taking us to a point beyond the horizon—a place he held sacred.

Sacredness comes in many forms, in all religions, belief systems, and value sets, and in all places. Its definition morphs with time, with age, and with wisdom.

My own personal journey, a pilgrimage on a path to find the meaning of sacred, had begun decades earlier, before I was even aware of what I was looking for. I was born into a family steeped in the language of travel and adventure. After my birth in Canada, my family soon left to live in Australia. We moved every few years—falling into the rhythms of a peripatetic lifestyle—from Australia to Africa, Canada, Europe, and the United States. Life’s gravity pulled me to the inevitable: a mission to see and to understand the planet and its people—in all its beauty and with all its raw edges.

And this is how I came to be heading north, deep into the Sahara in my mid-fifties, by now a professional explorer and photographer, with a group of veiled Tuareg elders in search of what is sacred. 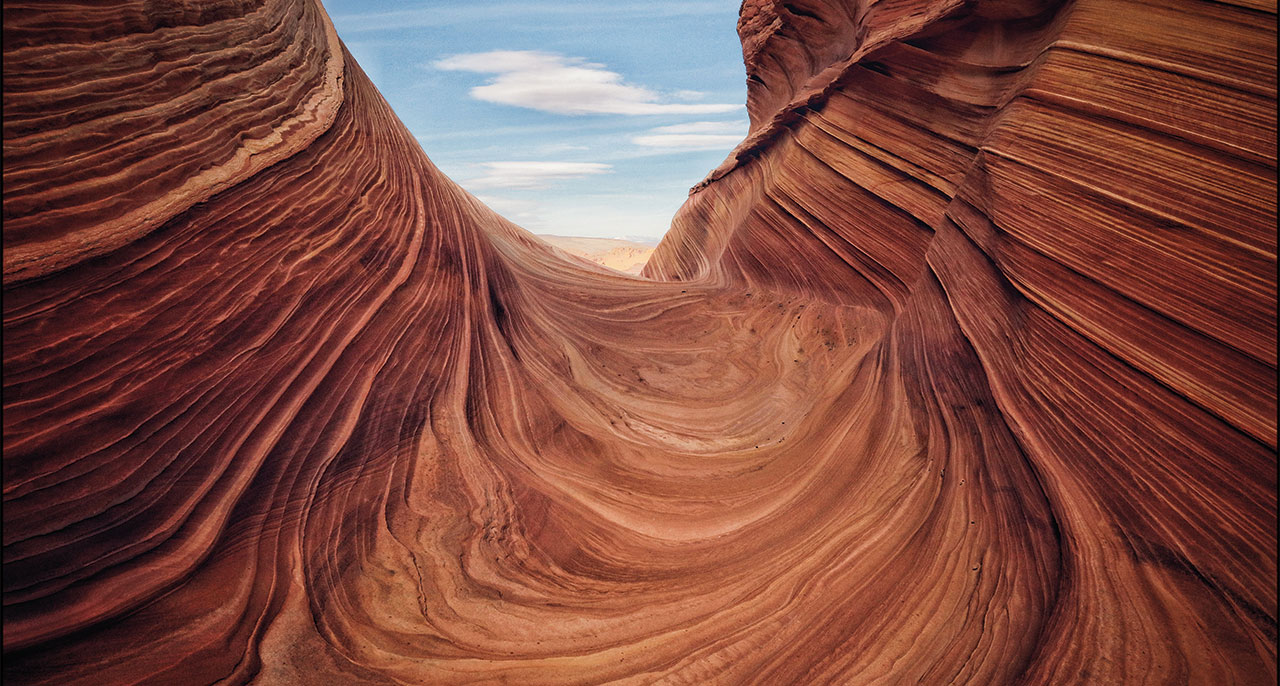 The Wave in Arizona is comprised of Navajo sandstone dunes that have calcified. It began forming 190 million years ago. Image by Chris Rainier.

The hot days had long blurred into one another. The hours of each day were filled with the slow, regular movement of the camels looking for coolness in a place with no shade and with the constant awareness of thirst. Water was precious out here in the desert—more precious than gold. Mohammed told me that one day when still a young man learning the celestial navigation of the sand, he’d gotten lost and separated from his camels. Eventually, with death near and almost defeated, he sank to his knees in the searing sand and prayed to Allah. In a simple and powerful moment of light and awareness, Mohammed’s god directed him to follow an unseen and unknown path to a watering hole.

Emboldened, Mohammed stumbled on for a day and night until he came upon the water source. His misfortune did not, however, end there. The well was deep—the water was some one hundred feet down. Without ropes or a bucket, he could not reach it. Mohammed once again prayed to Allah. Would he die at the mouth of the well or jump down? Allah gave his guidance and Mohammed jumped. Once in the cool water, he quenched his desperate thirst. Holding on by his fingertips to a thin ledge of no more than an inch or two, Mohammed trod water for days until a passing camel caravan stopped for water and rescued him. Mohammed was weak but was saved. He believed that Allah had allowed him to live for a higher purpose.

He would never forget it—the moment when his prayers brought him the life-saving gift of water.

Even before Mohammed announced that we were almost at our destination, I sensed that we were nearing our journey’s end. On the long traverse across the largest desert in the world, I’d contemplated my decision to join Mohammed’s journey to sacredness, and now, as we crested the hill, I wasn’t sure what I expected. Would we see an ancient temple lost in waves of rippling sand dunes? Would I behold a hidden landscape so wondrous as to come close to defining a sacred place? Would a shimmering city await us in the middle of the Sahara, a new and undiscovered mythological Timbuktu? It was none of these. Mohammed had led me to a small lake, a body of water seemingly lost in the middle of the desert. It was beautiful in its simplicity—an oasis of life surrounded by nothing but sand for a thousand miles in every direction. For Mohammed, this was so much more than water. It was an affirmation of spirit, of divinity.

A lake of water is to one man the very meaning of light and of his god. To another man, it’s simply a welcome watering hole along his journey. A mountain can be for one woman a sacred place, a place of pilgrimage or religious worship. For another woman, it represents a summit to climb and on which to face both the rock’s steepness and her own mortality. Sacredness comes in many forms, in all religions, belief systems, and value sets, and in all places. Its definition morphs with time, with age, and with wisdom. 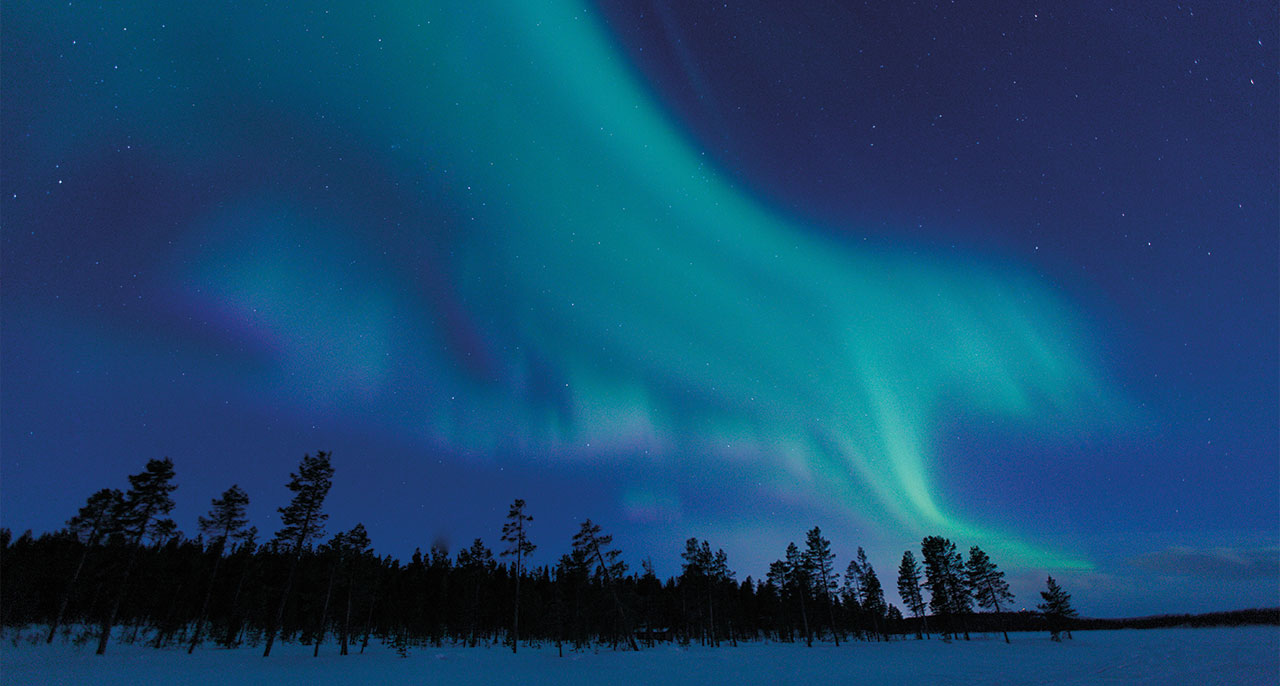 I have always been fascinated with the concept of power places and energy points. In my journeys to remarkable architectural wonders, I’ve sought them out—power places such as Machu Picchu, high in the Andes; or Rapa Nui (Easter Island), where volcanic moais stand as silent sentries on one of the most isolated islands in the Pacific; or the Taj Mahal, shimmering silver in a full-moon night on the floodplains of northern India. I ask myself: What makes a power place sacred? Is it its location?

Did the ancestors who built the monument upon it understand the location to hold an unseen power, as having a primordial pulse, that deemed it to be sacred? Did they feel an ancient residue, an inherent energy? Or does a location only become sacred once a place of contemplation or worship, a monument considered to be sacred by its creators, has been built upon it?

Do later generations, sometimes wholly randomly, assign sacredness to a place even if it was not originally considered sacred by its architects, the centuries adding to its perceived power? What is a sacred place—or a sacred space?

Recently, adapting to a world ravaged by the Covid-19 pandemic and with my other travel plans on hold, I sought refuge in the isolation and wonder of Iceland. With its nocturnal aurora ballets, its raging waterfalls, and its black lava beaches where the stranded icebergs washing back and forth in the surf shine like diamonds, Iceland demands that you pay attention to it.

As I’ve become older and as the miles of my pilgrimage have accumulated, I’ve begun to understand the intricacies of what sacred means to me: Love is sacred.

I was incredibly fortunate in spring 2021 to witness the eruption of Iceland’s Fagradalsfjall volcano, which had been dormant for more than six thousand years. On a number of occasions with some local friends, I hiked the few miles to the volcano’s edge to witness the power of lava bursting out and lighting the night sky and to feel its heat on my skin. I sat for hours mesmerized by its beauty, its pure, elemental beauty. I listened to the sound of the magma flow toward me, an eerie sound not unlike glass slowly tinkling in the distance. 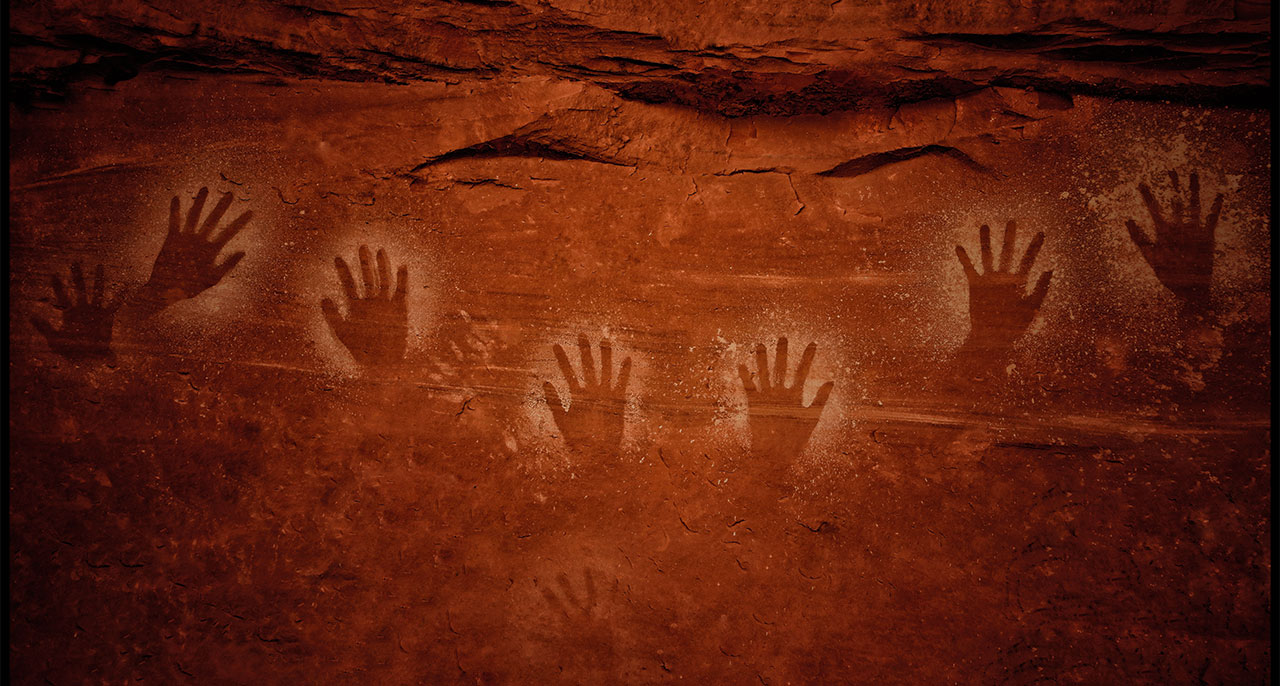 For approximately two-hundred thousand years, humans have intentionally left behind their handprints. These handprints in Utah are up to a thousand years old. Image by Chris Rainier.

On our last visit to the volcano I spent the whole night there, photographing and witnessing its massive rhythmic eruptions of lava arcing into the deep navy sky and falling to the ground to flow in rivers of glowing red. I paused often, wondering whether this would be my last opportunity to see this wonder up close and be so alone with its power. I was reluctantly thinking about leaving when I noticed the first hints of sunrise on the eastern horizon. I remembered the sheer beauty of another sunrise over the Saharan Desert sands all those years ago. I waited, knowing now that I had to stay and that I had no other place to go, and watched the sunrise unfold all of its color palette across the living, growing, breathing fire.

As I’ve become older and as the miles of my pilgrimage have accumulated, I’ve begun to understand the intricacies of what sacred means to me: Love is sacred. The love for my son, for my family, for my life partner, and for my friends has evolved into a purity of love and devotion, into sacredness. I will always and inevitably continue to search for the unknown and perhaps the unknowable. I will seek out impossible horizons, ancient topographies, moonlit monuments, and the answers to the question of what it means to be human. I have an obsession to see and to try to understand the wisdom of distant shores and remote cultures. But that morning, as I sat at the edge of the fiery volcano, I understood clearly and maybe for the first time in my life that for me, being alive, truly alive and reverent, is the most sacred act of all.

All images by Chris Rainier, excerpted from Sacred: In Search of Meaning. Copyright 2022, Mandala Publishing.

Chris Rainier is a documentary photographer and National Geographic explorer who’s highly respected for his documentation of endangered cultures and traditional languages around the globe. He’s a fellow at the Royal Geographical Society in London.