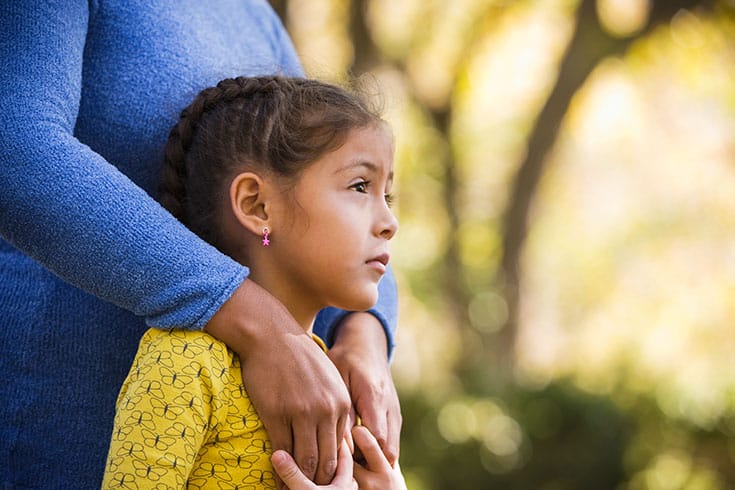 Emotional health, says parent coach Krissy Pozatek, means accepting the full range of human emotions, both the painful and the positive. For parents who wish their children nothing but happiness, that can be difficult.

When my daughter was four, she said to me, “Mommy, I’m worried.” She had tension in her voice and fear in her eyes.

Concerned, I asked, “Sweetie, what are you worried about?”

With mounting frustration, she replied, “I don’t know.”

My first instinct as a parent was to get in there and try to fix it, as if I had the power to remove the painful emotion from her body. I wanted to tell her that everything was okay and there was nothing to worry about, then make her some popcorn, put in a movie, and give her an extra snuggle.

But with my background in wilderness therapy and now as a parent coach, I knew I needed to resist my first impulse. Trying to fix kids’ feelings or distract them from their emotions doesn’t work. It can even create more problems, because it encourages kids to look to us for emotional rescue and disrupts their ability to process their feelings naturally.

So I pulled my daughter onto my lap and said, “Worry is okay, honey. Worry is a normal emotion, just like being happy, sad, and mad. I get worried too.” She didn’t seem terribly satisfied with my response, but she did accept it and she moved on.

A few days later she said, “Mommy, I am worried again.”

“What are you worried about, sweetie?” I asked.

I continued with the same answer. “Worry is okay, it’s a normal feeling.” I added a few more things this time.

“It’s just a feeling in your body that we all have. I know worry is uncomfortable. Why don’t you give your worry a hug, like you do your doll?” She nodded. I even asked (probably due to my own worry) if there was anything she’d like me to do, and she said, “No thank you.” It reminded me that as a parent there is nothing to do except listen and be present. Kids actually don’t want their emotions fixed.

This continued every few days, and I continued to give the same answer. Her sister even joined in. “Mom, she’s worried again.” Because she couldn’t identify it, I wondered if it was a more existential worry. Was she starting to learn about death? Did she observe a child get picked on at school? Was she learning more about the inequities in society, as she has seen how some kids have a lot more than other kids?

I didn’t know where this was going. No parent does. But I did know from my Buddhist studies that anxiety is a normal feeling and part of being alive in an impermanent world. Pema Chödrön writes about the natural upwelling of shakiness or edginess that happens when we are fully present, because none of us knows what is going to happen next.

I knew there wasn’t a pretty pink bow I could put on her worry. I also knew from my work as a therapist that if I don’t respond specifically to the emotion, she might escalate to acting it out. All acting-out for kids (and adults) has emotions underneath. Luckily, she showed me the emotion first, not a behavior like refusing to go to school or escalated anger, which is more frequently the case.

Emotional resilience has become a buzzword in parenting. Yet most of us want our children to feel only one emotion: happiness. Children’s happiness has become the primary project in our parenting culture today. As Buddhists we may realize that emotional pain is an opportunity for awakening, but with our children we are quick to shield them from any emotional discomfort.

Instead of happiness, I believe our parenting goal should be emotional health.

Emotional health means that we can be with all of our emotions without reactivity. When parents steer children toward happiness, we are on some level indicating that other emotions are not okay. Though not intentioned, this disrupts children’s natural ability to feel the normal spectrum of human emotions, which inevitably includes anger, anxiety, embarrassment, fear, and so on.

Resiliency means learning to be with discomfort, frustration, disappointment, worry, sadness, and even boredom. The exciting news is that it can be taught and learned. Teaching kids to be with their emotions isn’t a quick fix, but it creates the conditions for long-term contentment. Like the maple tree in the backyard that has grown resilient and strong after years of storms, we can normalize and validate the storms of life and help children cultivate their inner strengths and ability to process emotions naturally.

One day a few weeks later we were in the car, and my four-year-old said in a sing-songy voice, “Mooom, I’m woooried and I know it’s oookaaaayyyy.”

I looked back and she was smiling. She seemed brave and triumphant. She had learned to meet her anxiety with acceptance and equanimity. As I shed a tear in the front seat, I also felt brave and triumphant. She showed me that we can let our kids experience their emotions fully. Not fearing emotions, they can learn to be with them until they pass. Because emotions, like all things, are impermanent.